Goldman Sachs has hired Jared Cohen, a former Google executive nicknamed the “director of regime change” by Wikileaks founder Julian Assange, for a  new project that will use technology to advance the notoriously powerful investment bank’s policy goals around the world. Cohen was also a senior official in Hillary Clinton’s state department who will now manage “shifts in the geopolitical landscape” for the financial giant.

Cohen, who is also a fellow of the Council on Foreign Relations, will join Goldman Sachs at its most senior level — as a partner and member of the bank’s management committee, as well as president of global affairs. He will also lead a new department called the Office of Applied Innovation, which will harness “shifts in the geopolitical landscape” and “rapidly evolving technology” to advance the goals of the global finance behemoth. 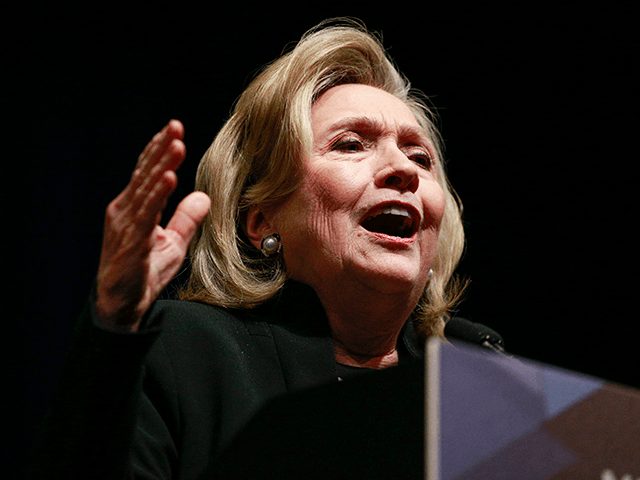 From the State Department to Google and now to Goldman — Cohen’s career spans the most powerful companies and institutions in the world. Throughout it all, he has had a relentless focus on finding new ways to influence the course of political events, both domestically and in foreign countries.

Cohen joined the U.S. State Department after graduating college, working under George Bush appointee Condoleezza Rice. He was one of the few Bush appointees kept on by Hillary Clinton, and was given a key role in seeking the cooperation of U.S. tech executives to influence countries that were targets of U.S. regime change operations, including Russia, Syria, and Iran.

At Google, Cohen was the head of a project called Jigsaw, an AI censorship system purportedly aimed at “counter-radicalization,” but was later deployed around the internet to police a wide range of online conversations, and interfere in elections.

Google executives discussed using Jigsaw to target the political right in the immediate aftermath of Donald Trump’s 2016 victory. As revealed by footage leaked to Breitbart News, executives discussed Jigsaw — which at that point, had been presented to the public as a means of combating Islamic terror movements — as a potential tool to fight the “extremism” of the global populist movement.

A few months after that companywide meeting, Google announced the deployment of Jigsaw to guarantee “election security” around the world, by countering “online interference” — terms that would become well known in conservative media as fig-leaves for tech companies’ own election meddling.

But Jigsaw’s use as a tool to influence the politics of other countries didn’t start with Trump. A leaked email from Cohen to Hillary Clinton, sent in 2012 at the height of the Syrian Civil War, explained “my team is planning to launch a tool on Sunday that will publicly track and map the [government] defections in Syria and which parts of the government they are coming from.”

Now Cohen is headed to Goldman Sachs, a financial giant known for its aggressive interference in politics around the world, where he will lead a new department

An email sent to Goldman Sachs alumni and obtained by Breitbart News touts Cohen’s career across the high points of power in the United States. 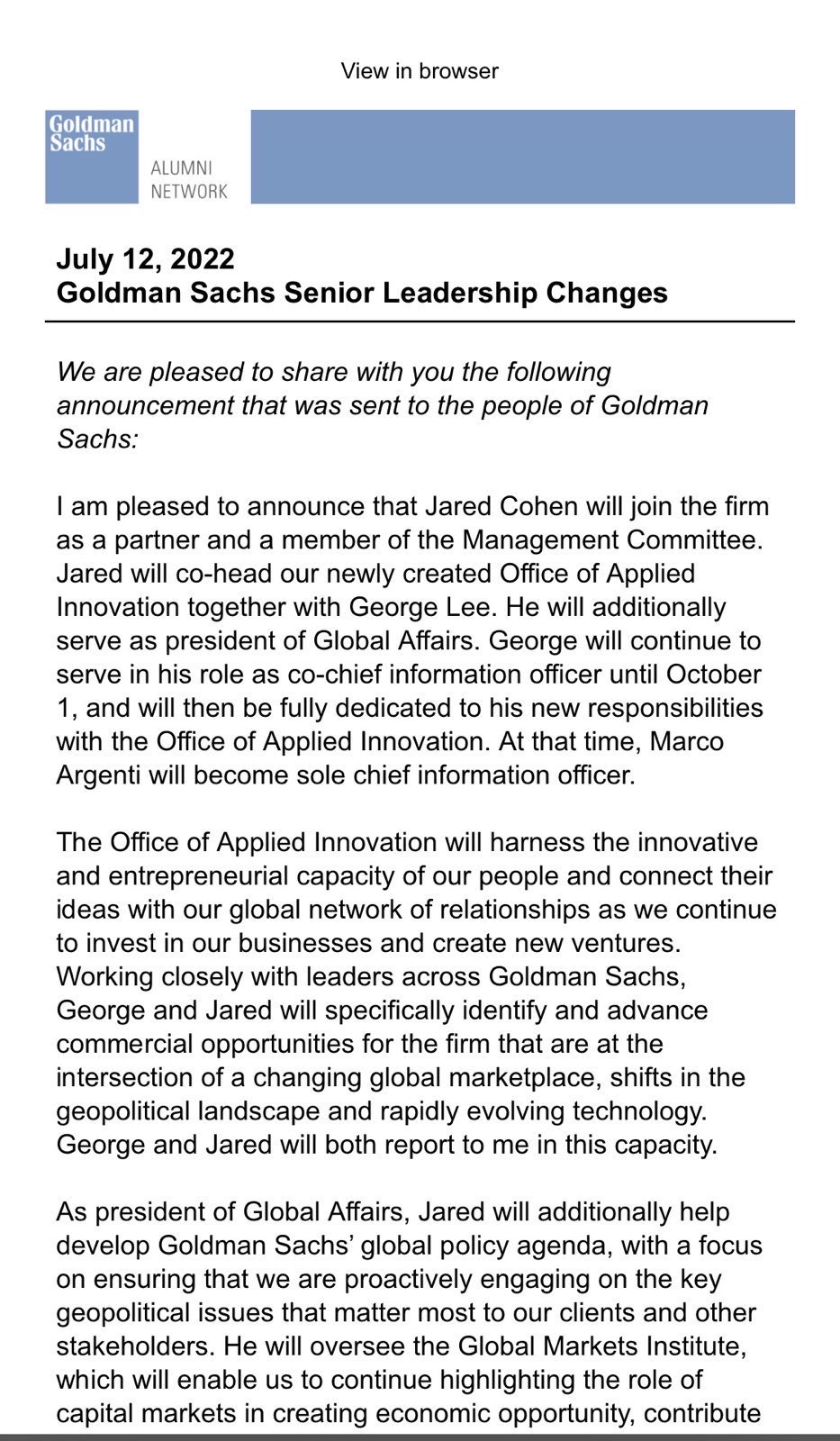 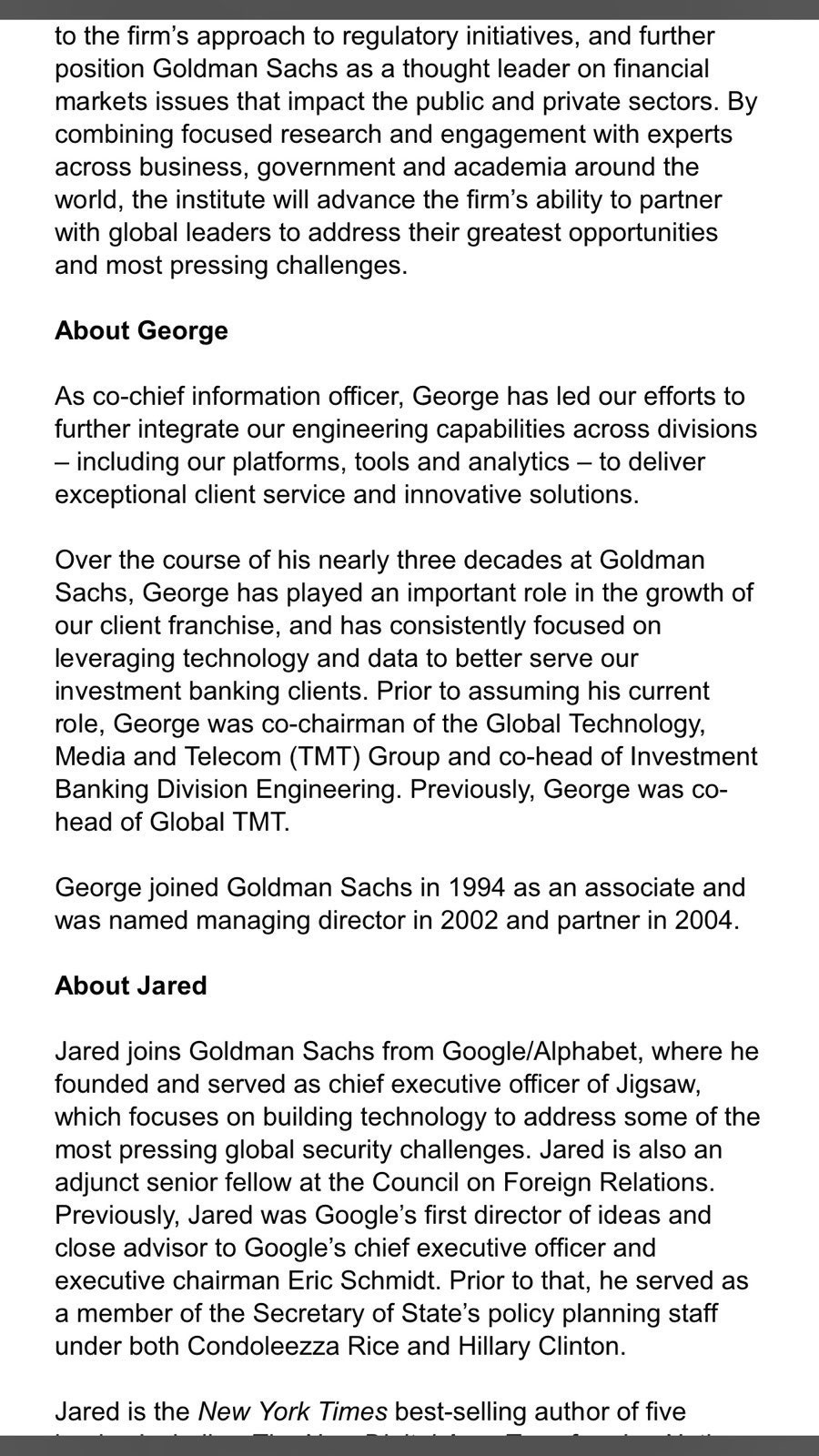 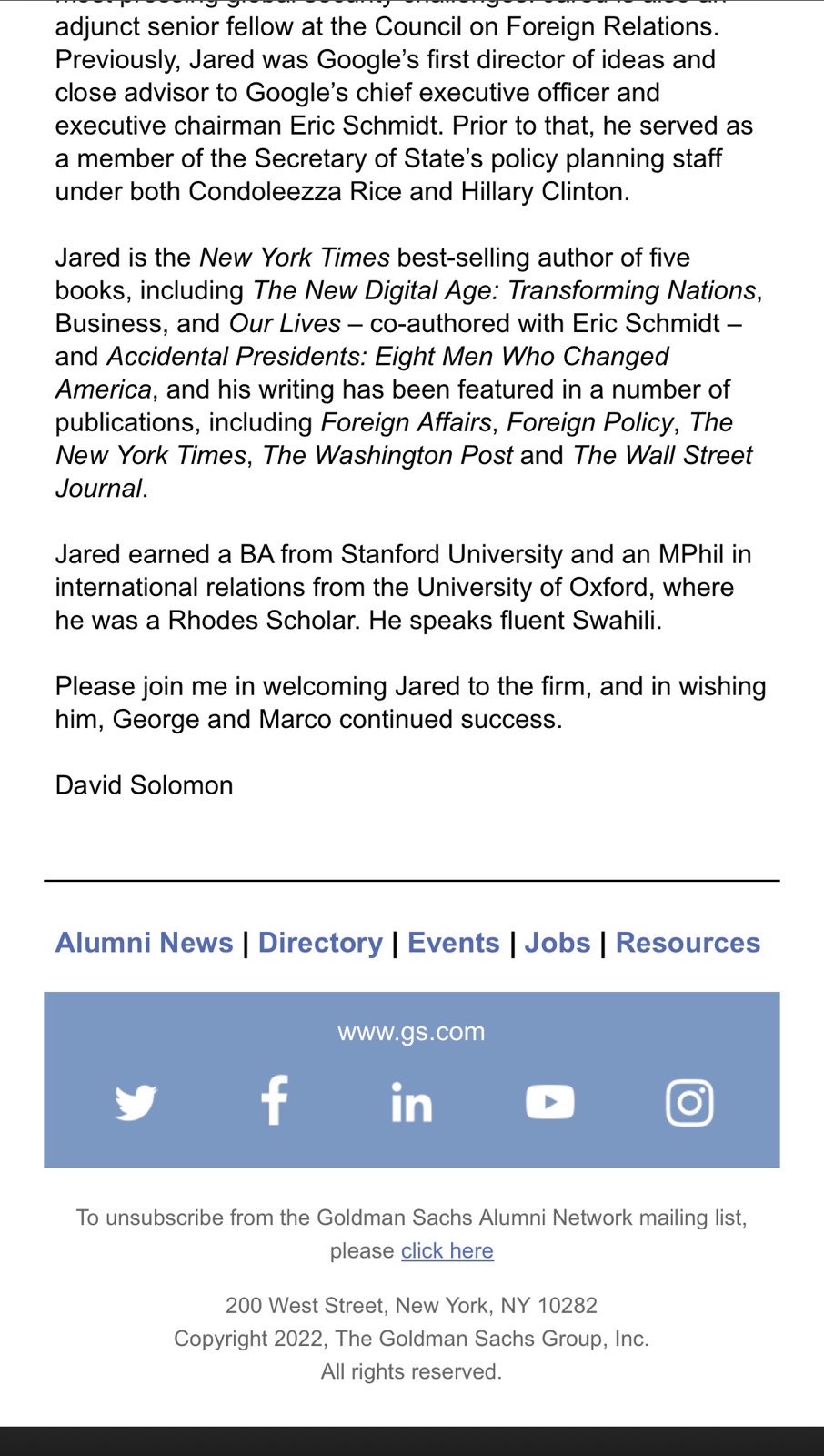 It is unclear from Goldman’s corporate jargon-laden statement what seeking commercial opportunities in “shifts in the geopolitical landscape and rapidly evolving technology,” but it suggests that Cohen’s role will be a continuation of his work at Google and the State Department — using technology to advance his employer’s geopolitical goals.