The American Massage Therapy Association (AMTA) will host its national convention in Cleveland, the home of Brown’s quarterback Deshaun Watson, this month. Watson’s future in the NFL is unclear after 24 women, all massage therapists, have brought sexual misconduct complaints against him.

The incidents occurred during massage therapy sessions in 2020 and 2021, when Watson played for the Houston Texans.

The AMTA convention takes place at the Huntington Convention Center in Cleveland, which is down the street from the Browns’ FirstEnergy Stadium, on August 25-27. Attendees will stay at the Hilton Downtown Hotel, and Olympic gold medalist swimmer Michael Phelps is scheduled as keynote speaker.

Watson received a six-game suspension without pay from Judge Sue L. Robinson on Monday, and the NFL filed an appeal Wednesday for a longer suspension, up to one year. The quarterback, who denies wrongdoing, has settled 20 of 24 civil suits with the accusers, and two Texas grand juries declined to indict him this spring.

“I never assaulted any woman. I never disrespected any woman,” Watson stated during the March press conference announcing him joining the Browns.

Nonetheless, NFL spokesman Brian McCarthy said Watson’s agreements with the women have “no impact on the collectively bargained disciplinary process,” and another league official told the AP “settling doesn’t give someone a pass.” 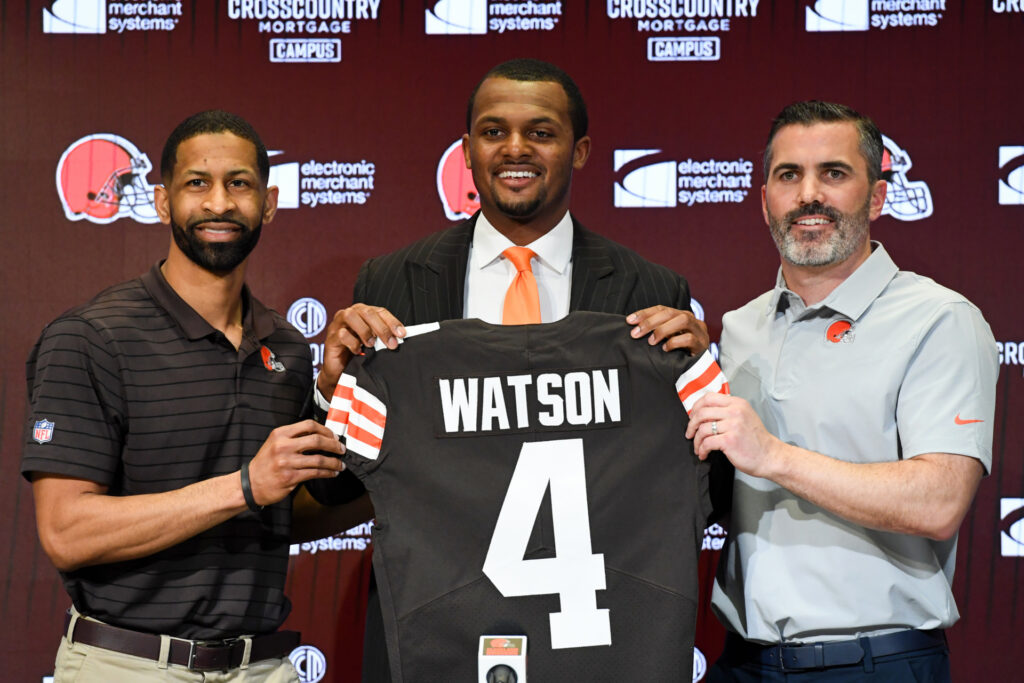 Judge Robinson also stipulated in her Monday decision that the NFL should limit Watson’s massage therapy “to Club-directed sessions and Club-approved massage therapists for the duration of his career, and so impose this mandate as a condition to his reinstatement.”

After Monday’s decision, the AMTA released a statement:

Massage therapists should never have to tolerate conduct outside the bounds of therapeutic massage therapy within a massage session. AMTA strongly believes that any client who steps over the line to inappropriate touch should face the legal consequences. And it’s disappointing to see such a relatively light punishment from the NFL levied toward Deshaun Watson in their findings of his violation of the league’s personal-conduct policy.

If the NFL is concerned about professionalism and upholding high standards in the league, creating a safe workplace for all members of athletes’ care teams should be a priority. We hope the league is taking measures to ensure that the massage therapists on the Browns’ personnel and throughout the NFL, as well as those supporting individual athletes, are able to work in a safe and professional environment.

The alleged behavior, and the language used by the legal team and others involved in this case put professional, licensed massage therapists at risk by condoning inappropriate conduct in a massage environment.

The NFL filed an appeal Wednesday seeking full-year suspension, along with an $8 million fine and treatment for Watson.

The NFL is adamant that Watson should forfeit more than the $57,500 per game he’ll owe based on his $1.035 million base salary for the 2022 season. The Browns lowered the base and gave him a $45 million signing bonus to clear cap space for the season. It’s part of his fully-guaranteed five-year, $230 million contract extension after the Browns traded for him in March, sending a net of five draft picks to the Texans, including three first-rounders.

This week, the National Association of Women (NOW) slammed the NFL for what they perceived as a light punishment for Watson, calling the decision “unacceptable, insulting, and dangerous — but not surprising.” The women’s activist group accused the NFL of having “a vested interest in enabling sexual misconduct, assault, and violence.”

Watson’s case has now been turned over to appeals officer Peter C. Harvey, the former New Jersey attorney general who was appointed Thursday by NFL commissioner Roger Goodell. The NFL and the National Football League Players Association (NFLPA) also have the option to negotiate a settlement before the ruling. The NFLPA did not recommend a suspension for Watson, but said they would follow Judge Robinson’s decision, and urged the NFL to not appeal the decision.

Watson will continue to practice with the team and play in exhibition games before his suspension begins the first week of the regular season, and will return to the field on October 23, when the Browns play at Baltimore.