It’s unclear how many NFL players view ayahuasca as a performance-enhancing drug, but after Aaron Rodgers’ recent podcast appearance, several more likely will.

During an appearance on the Aubrey Marcus Podcast, Rodgers revealed that his past use of psychedelic drugs – specifically ayahuasca – with helping him learn how to “love himself unconditionally.” Something that Rodgers believes helped him have the best season of his career in 2021.

“To me, one of the core tenets of your mental health is that self-love,” Rodgers explained on the podcast.

“That’s what ayahuasca did for me, was help me see how to unconditionally love myself.”

“It’s only in that unconditional self-love, that then I’m able to truly be able to unconditionally love others. And what better way to work on my mental health than to have an experience like that?”

Ayahuasca is a psychoactive tea that contains the hallucinogenic drug DMT.

After Rodgers’ ayahuasca experience had concluded, he described the feeling as one might describe a rebirth.

“I laid there afterward on my mat and then opened my eyes, and it felt like I was opening my eyes for the first time,” Rodgers said.

“I really feel like that experience paved the way for me to have the best season of my career.” 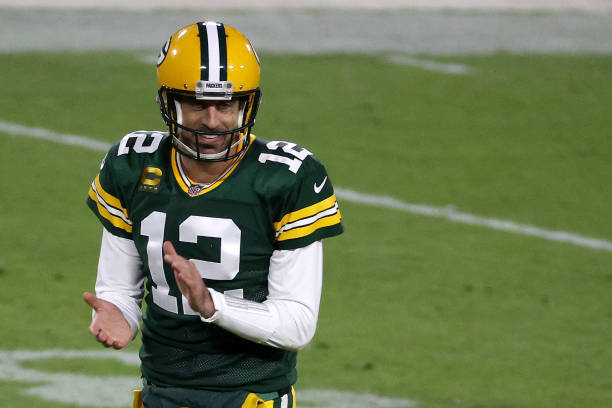 Aaron Rodgers #12 of the Green Bay Packers celebrates following a touchdown completion to Robert Tonyan #85during the second quarter of their game against the Philadelphia Eagles at Lambeau Field on December 06, 2020, in Green Bay, Wisconsin. (Dylan Buell/Getty Images)

Rodgers has always been the leader of his team since taking over for Brett Favre in 2008. However, as he says, psychedelics showed him a new way in which he could lead them.

“The greatest gift I can give my teammates, in my opinion, is to be able to show up and to be someone who can model unconditional love to them,” the former Super Bowl champ explained.

“They won’t care about what you say until they know how much you care.”

That “unconditional love” will no doubt be appreciated by a Packers squad that is going through a reloading process after the departure of several key veteran players from last year’s squad. Rodgers signed a massive $150 million contract extension in March that all but ensures he will end his career in Green Bay.