Phillies outfielder Nick Castellanos got into a heated exchange with a reporter after being booed off the field by Philly fans following yet another disappointing game.

With the score tied 1-1 in the bottom of the eighth inning and the go-ahead run on third, Castellanos struck out, and the Phillies went on to lose 6-2 in extra innings. Boos rang out from the stands as the $20 million per year outfielder made his way off the field.

In the clubhouse after the game, a reporter asked Castellanos whether he heard the boos. The slugger clearly did not appreciate the phrasing of the question, the question itself, or both. Because he sarcastically responded to the reporter by saying, “I lost my hearing” and that it was a “stupid question.”

Things got a bit contentious in the #Phillies clubhouse tonight during and after Nick Castellanos' media availability and our @6abc cameras were there. Thoughts on this exchange? pic.twitter.com/DcqmbIpz2e

However, the reporter, Jim Salisbury of NBC Sports Philadelphia, did not take Castellanos’ sarcastic retort to his rhetorical question lightly. Instead, Salisbury insisted it wasn’t a stupid question and Castellanos should “be equipped to answer the question.” Salisbury appeared to punctuate this by pointing his finger at Castellanos.

Sensing the heightened intensity and awkwardness of the moment, a member of the Phillies media relations team stepped in between the player and the reporter and broke up the interview. 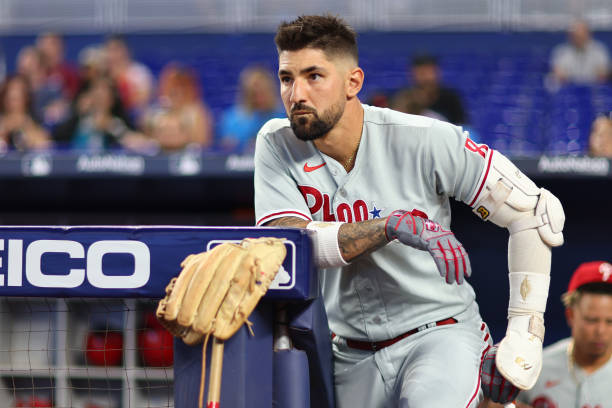 Nick Castellanos #8 of the Philadelphia Phillies looks on prior to the game against the Miami Marlins at loanDepot park on July 15, 2022, in Miami, Florida. (Michael Reaves/Getty Images)

In the final analysis, was the question stupid? Yes. The subject matter wasn’t stupid. Castellanos inked a 5-year $100 million deal with Philadelphia after hitting .309 last year and is hitting a lowly .245 through 83 games this year. He can and should answer questions about that and any fan reaction to it.

However, asking an obviously volatile player whether he heard boos that were clearly audible to anyone at the stadium or watching on TV is a stupid and insulting lead-in question. Far better to ask him for his thoughts and reaction to the booing instead of asking whether he heard it.

CORRECTION: An earlier version of this article stated that Castellanos plays for the Reds. He is, in fact, in his first year with the Philadelphia Phillies.