NFL quarterback Tom Brady says that he is “still going through the process” of deciding whether to retire.

Over the weekend, ESPN ignited a firestorm when it reported that Tom Brady has “decided to” retire from the NFL after a long and fruitful career in which he won seven Super Bowl titles.

Tom Brady is retiring from football after 22 extraordinary seasons, multiple sources tell @AdamSchefter and me. More coming on https://t.co/b1HxijCoJE. pic.twitter.com/lgwoH4dATL

While Brady did not outright deny reports of his retirement, he did not confirm them either. Speaking on the “Let’s Go!” podcast Monday, Brady said that he has been evaluating his feelings before making the big decision to bow out after 22 seasons. 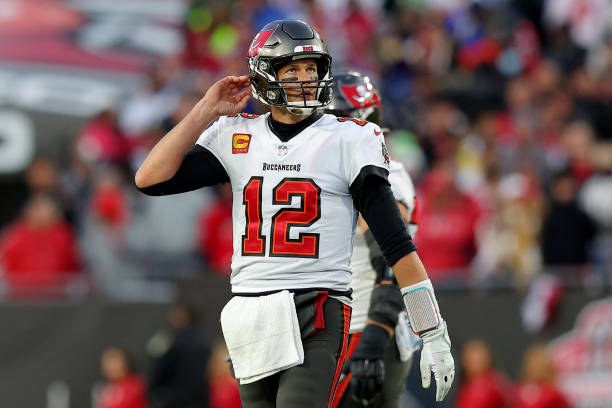 TAMPA, FLORIDA – JANUARY 23: Tom Brady #12 of the Tampa Bay Buccaneers reacts in the fourth quarter of the game against the Los Angeles Rams in the NFC Divisional Playoff game at Raymond James Stadium on January 23, 2022 in Tampa, Florida. (Photo by Kevin C. Cox/Getty Images)

“It was still a good week for me. I’m still going through the process I said I was going through. Sometimes it takes some time to really evaluate how you feel, what you want to do. I think when the time is right, I’ll be ready to make a decision one way or another like I said last week,” he told Jim Gray.

When asked if the reports of his retirement surprised him, Brady implied he might have misspoken in private about his retirement, noting that has been taking “day-to-day.”

We’re in such an era (of) information, and people want to be in front of the news often, and I totally understand that and understand that’s the environment we’re in. But I think for me, it’s just literally day-to-day with me. I’m just trying to do the best I can every day and evaluate things as they come and try to make a great decision for me and my family.

Brady also did not appreciate that news of his alleged retirement took away from the two championship games this past weekend.

“There’s a lot of interest in when I’m gonna stop playing, and I understand that,” he said. “It’s not that I don’t recognize that. When I know, I’ll know, and when I don’t know, I don’t know. I’m not going to race to some conclusion about that.”

When reports broke of Brady’s retirement, his father, Tom Brady Sr., told KRON-TV that the reports were inaccurate.

“This story, Mike, is total conjecture,” Brady Sr. said. “Tommy has not made a final decision one way or the other, and anybody else that says that he has is absolutely wrong.”