Since the leak of Justice Samuel Alito’s draft majority opinion in the Dobbs v. Jackson Women’s Health Organization case that eventually led to the overturning of Roe v. Wade, America has endured a “Summer of Rage.” The wave of demonstrations saw protesters going far beyond simply donning “Handmaid’s Tale” bonnets and gathering around the Supreme Court. There have been dozens of acts of violence, destruction, and harassment aimed at intimidating anti-abortion Christians and conservatives. In this series of articles, we identify key players, organizations, and locations in this radical movement. We will also explain elements of the interconnected system that provides organizational and/or financial support for this radical agenda.

Read the other articles in this series:

In 2020, a woman named Vara Ramakrishnan was quoted in a story about rising burglaries in San Francisco Bay area after her home was robbed on Christmas Day 2020:

“They pretty much took all the gold-toned jewelry in the home,” she said last week during an interview with the Town Crier. “They tossed all the drawers. They worked, I think, with metal detectors because they had pulled out things which contained metal which were in the back of closets and things like that.”

Ramakrishnan was keen to note that this was no “smash-and-grab.” The burglars had apparently been watching her house. “The fact that they followed us is creepy,” she told reporters.

Flash-forward to 2022: A radical left-wing activist Ramakrishnan has been identified as one of the leaders of “Ruth Sent Us,” a radical pro-abortion organization whose name is an apparent homage to former Supreme Court justice and abortion industry ally Ruth Bader Ginsburg.

Ms. Ramakrishnan did not respond to a request for comment for the Summer of Rage series.

Following the leak of Justice Alito’s draft opinion in the Dobbs case, Ruth Sent Us activists published a Google map with the supposed locations of the homes of six Supreme Court justices, which they described as the places from which “the six Christian fundamentalist Justices issue their shadow docket rulings from.” About a month later, a man was arrested for planning to murder Brett Kavanaugh near his home. The group denied posting the addresses and claimed the incident “wasn’t a serious assassination attempt.”
However, a Maryland federal court filing revealed that the California man accused the assassination plot had goal to drastically alter the makeup of the Supreme Court “for decades to come.” 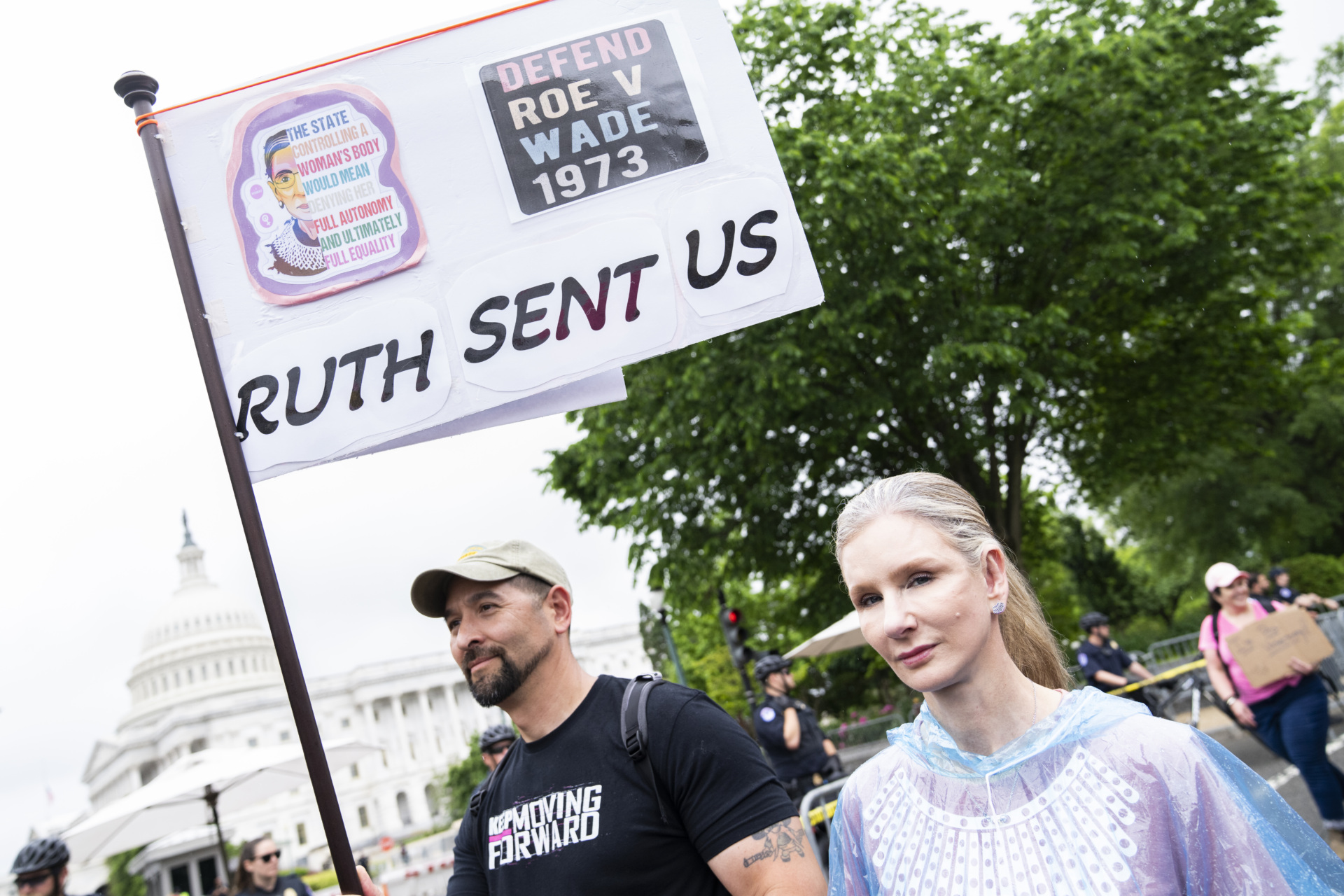 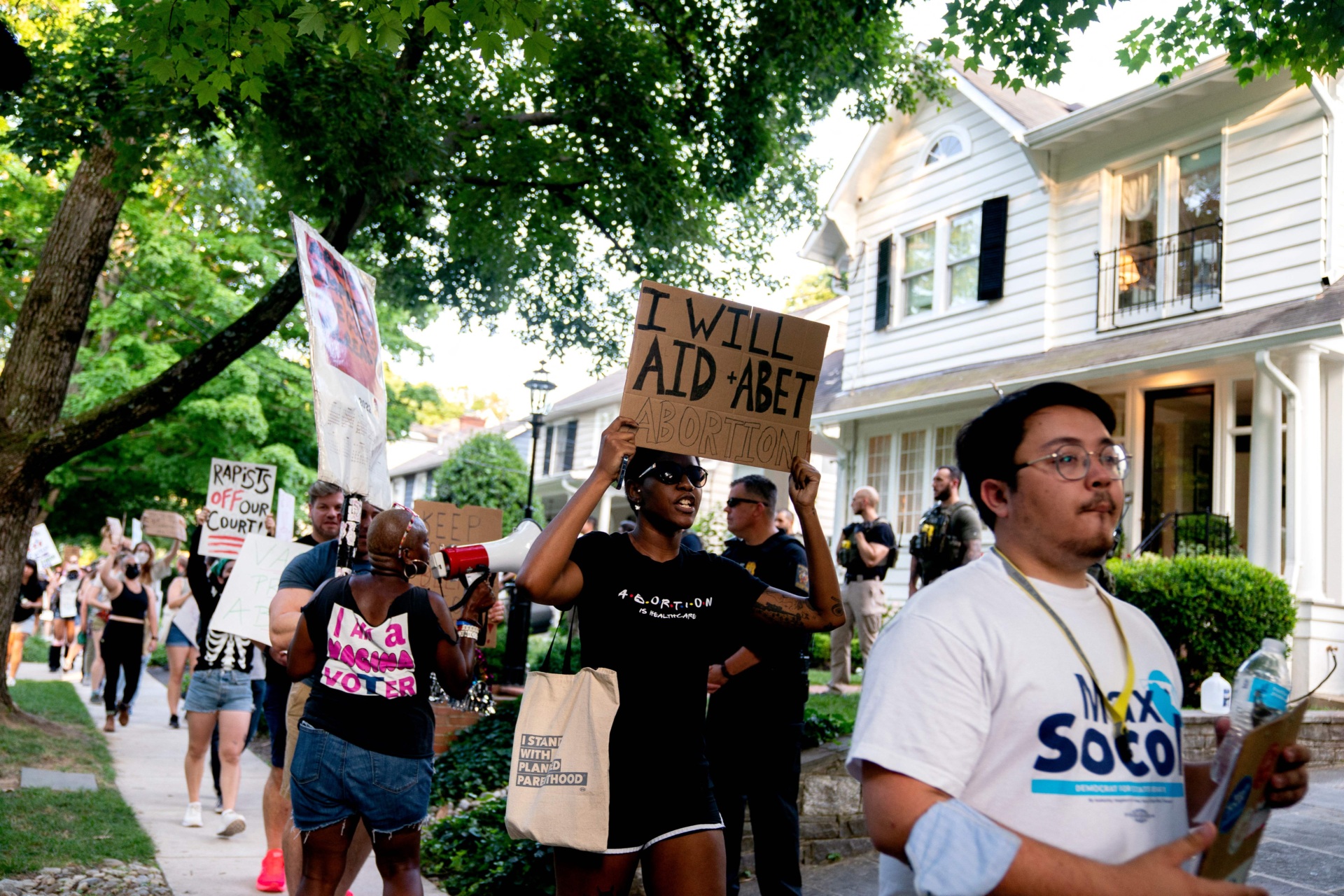 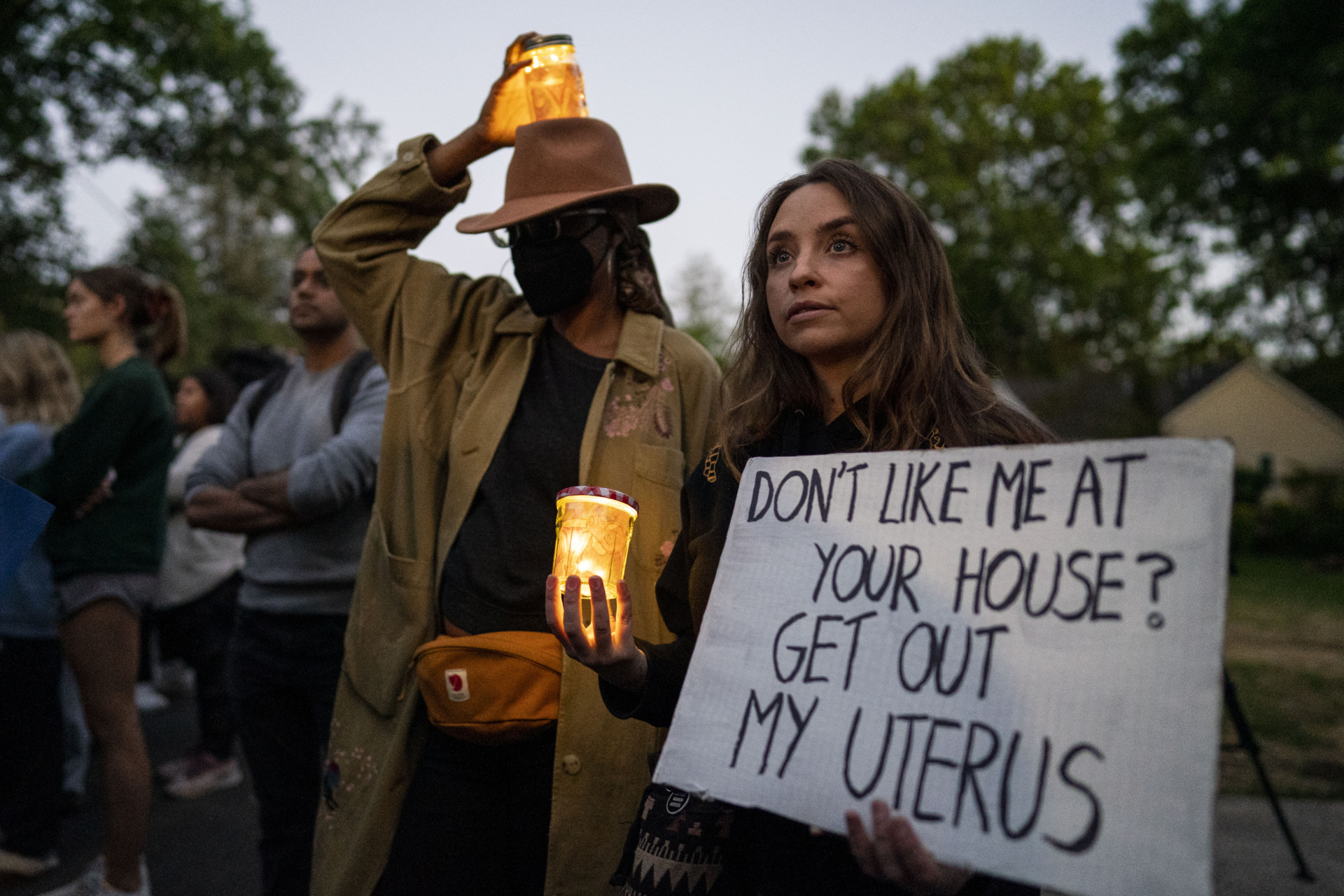 Pro-abortion activists hold a sign outside the home of Supreme Court Justice Samuel Alito on May 9, 2022, in Alexandria, VA. (Kent Nishimura/Los Angeles Times via Getty Images) A pro-abortion activist holds up a hanger outside the home of Supreme Court Justice Brett Kavanaugh in Chevy Chase, Maryland on May 7, 2022. (Craig Hudson/The Washington Post via Getty Images) 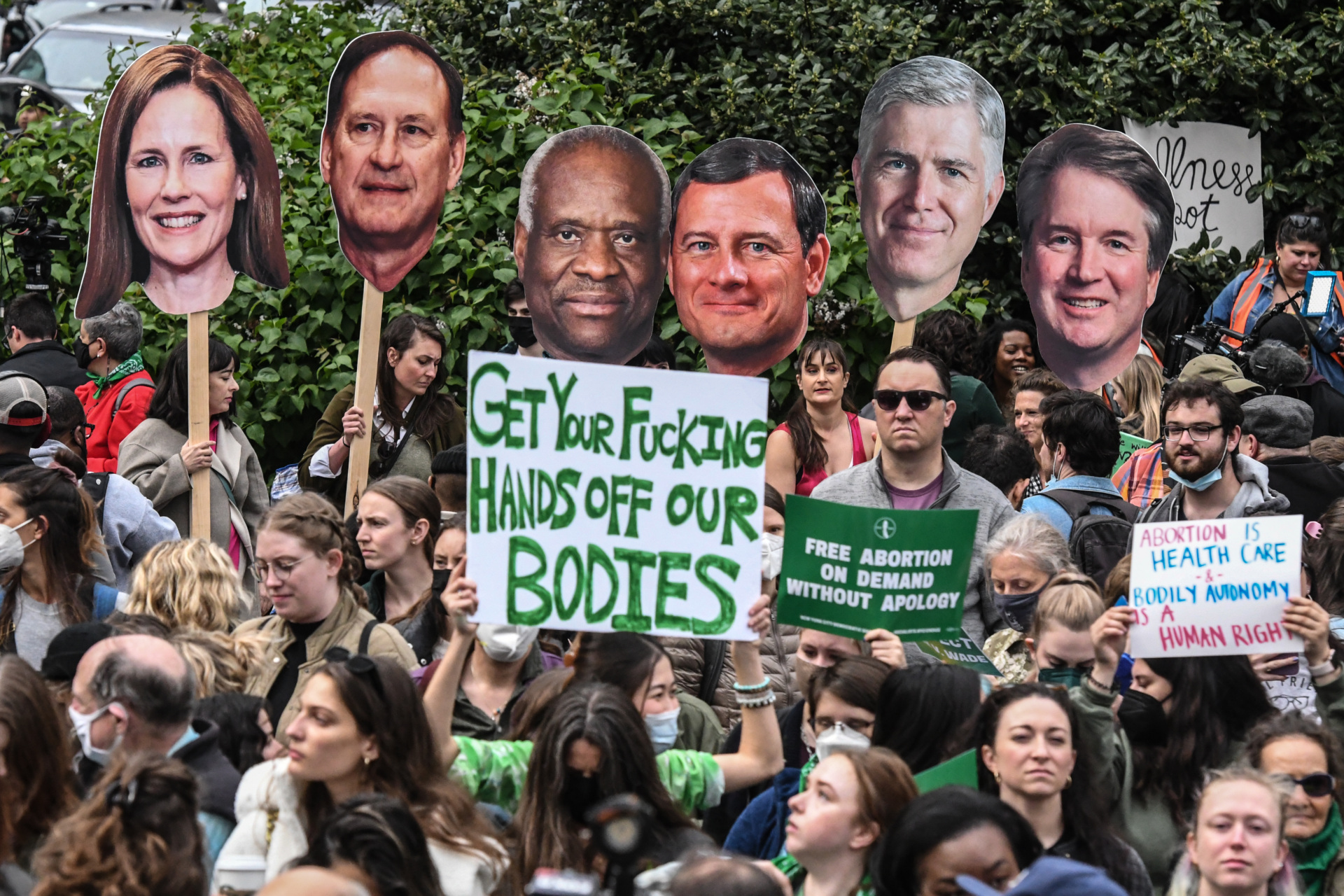 Pro-abortion activists at a protest in New York City on May 3, 2022. (Stephanie Keith/Bloomberg via Getty Images 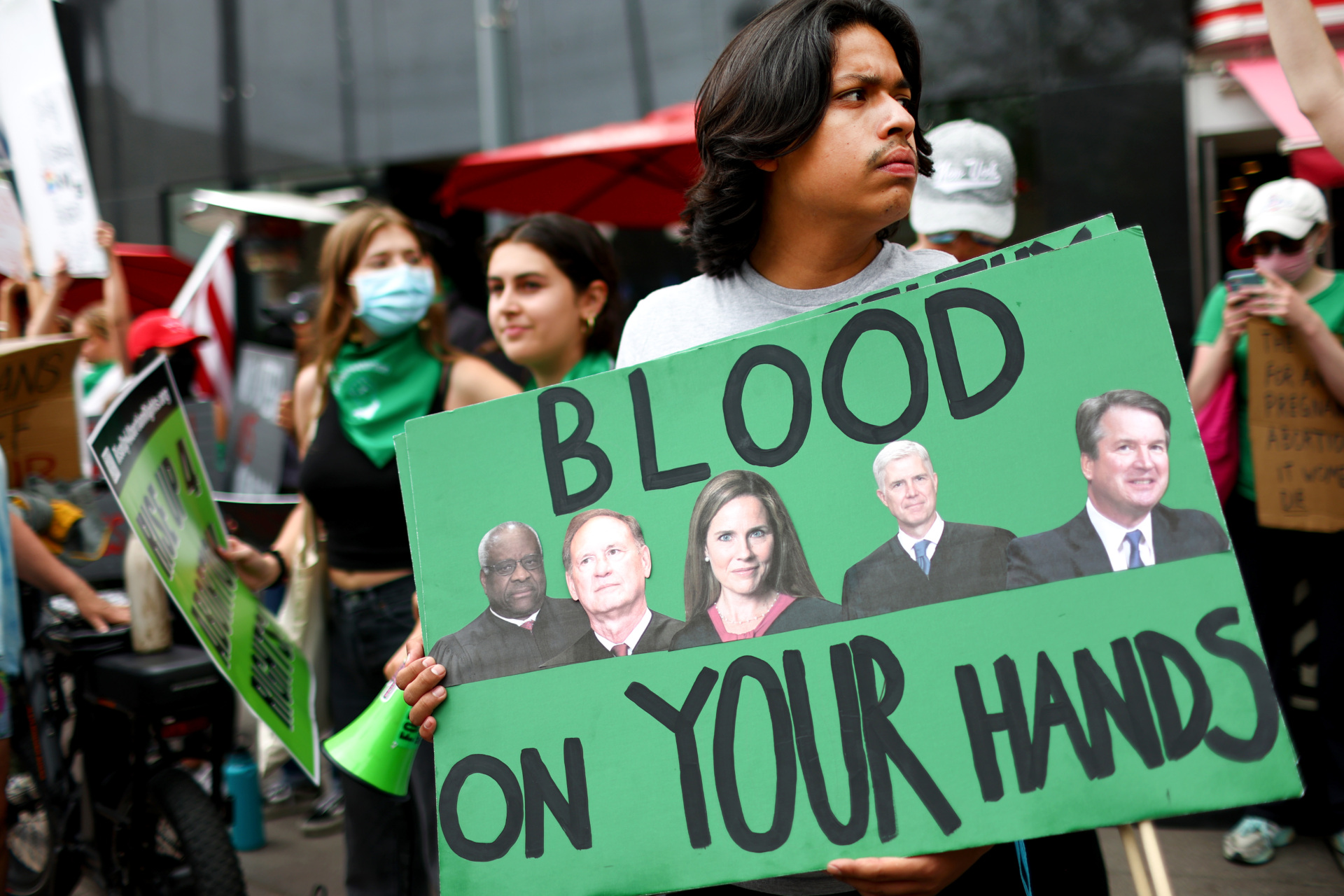 The doxxing sparked a wave of protests targeting the justices where they and their families lived, though the group quickly went beyond targeting homes, encouraging protestors to “express their anger” at Justice Amy Coney Barrett’s church and the schools attended by her children.

Ruth Sent Us has been banned from Twitter, but managed to be reinstated on TikTok, where the group has gone on to encourage protestors to target Joe Biden for being a “devout Catholic.”

Ironically, the White House has appeared to show support for the type of activism that has become associated with Ruth Sent Us. Earlier this month, Press Secretary Karine Jean-Pierre said she supported protests at restaurant so long as they were “peaceful.”

Certainly, Ramakrishnan appears to have been a victim of “creepy,” illegal, and violent stalking. Ironically, she is now appears to be associated with the group behind with the highest profile stalking campaign in recent American history.

Alex Marlow is the Editor-in-Chief of Breitbart News, the host of Breitbart News Daily on SiriusXM’s Patriot Channel 125, and the author of the bestselling book, Breaking the News: Exposing the Establishment Media’s Hidden Deals and Secret Corruption. You can follow Alex on Facebook, Instagram, and Twitter at @AlexMarlow.