Indiana Senate lawmakers advanced a bill to the House chamber on Saturday restricting abortion and imposing felony charges for certain violations should it become law.

But even some Republicans voted against it, saying it is “flawed” because it does not go far enough to protect the unborn after the U.S. Supreme Court reversed federal protection for the procedure under Roe v. Wade.

“The bill fails substantively in many areas, including its failure to provide any meaningful enforcement provisions,” Indiana Right to Life said in a statement. “This bill goes through the motions on paper, but lacks any teeth to actually reduce abortions in Indiana by holding those who perform abortions or would intentionally skirt the law accountable with criminal consequences.” 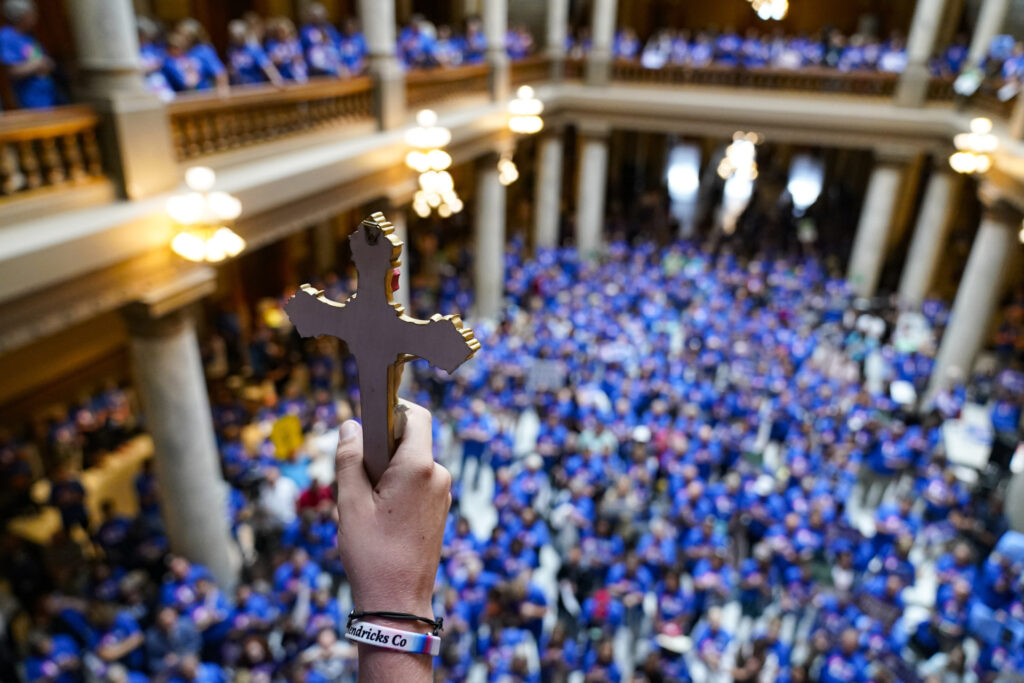 Luke Howard, of Avon, Ind., holds a crucifix aloft as anti-abortion supporters rally as the Indiana Senate Rules Committee met a Republican proposal to ban nearly all abortions in the state during a hearing at the Statehouse in Indianapolis, July 26, 2022. (AP Photo/Michael Conroy)

The legislation says in part:

Makes abortion a Level 5 felony unless: (1) the abortion is necessary to prevent a substantial permanent impairment of the life of the mother; or (2) the pregnancy was the result of rape or incest and the fetus has a specified postfertilization age. Specifies other requirements for performing a lawful abortion. Grants the attorney general concurrent jurisdiction to prosecute crimes in a county if the county prosecutor is categorically refusing to prosecute these crimes. Requires reporting to the state department of health the termination of a pregnancy where the fetus is incapable of sustained life outside the womb. Prohibits an abortion clinic from performing a surgical abortion.

Defines “abortion”, “pregnancy”, “rape or incest”, and “fetus”. Provides a defense for a pregnant mother charged with a criminal offense for terminating or seeking the termination of her pregnancy. Specifies that a person who terminates the pregnancy of a pregnant woman upon her request may only be charged with certain crimes. Exempts from the crime of feticide: (1) the pregnant mother; (2) a person who provides medical treatment in good faith to a pregnant woman that results in the accidental or unintentional termination of the pregnancy; and (3) a physician who performs a medical procedure to terminate the pregnancy upon request of the pregnant woman. Provides that the statute requiring consent of a parent or legal guardian for a minor’s abortion does not apply to a minor who is less than 18 years of age who: (1) is pregnant as a result of rape or incest by a parent, legal guardian, or custodian of the unemancipated minor; and (2) provides the physician with an affidavit, signed under the penalties of perjury, attesting to the rape or incest. Requires the maternal mortality review committee to study how changes in the state’s abortion laws affect maternal mortality in Indiana. 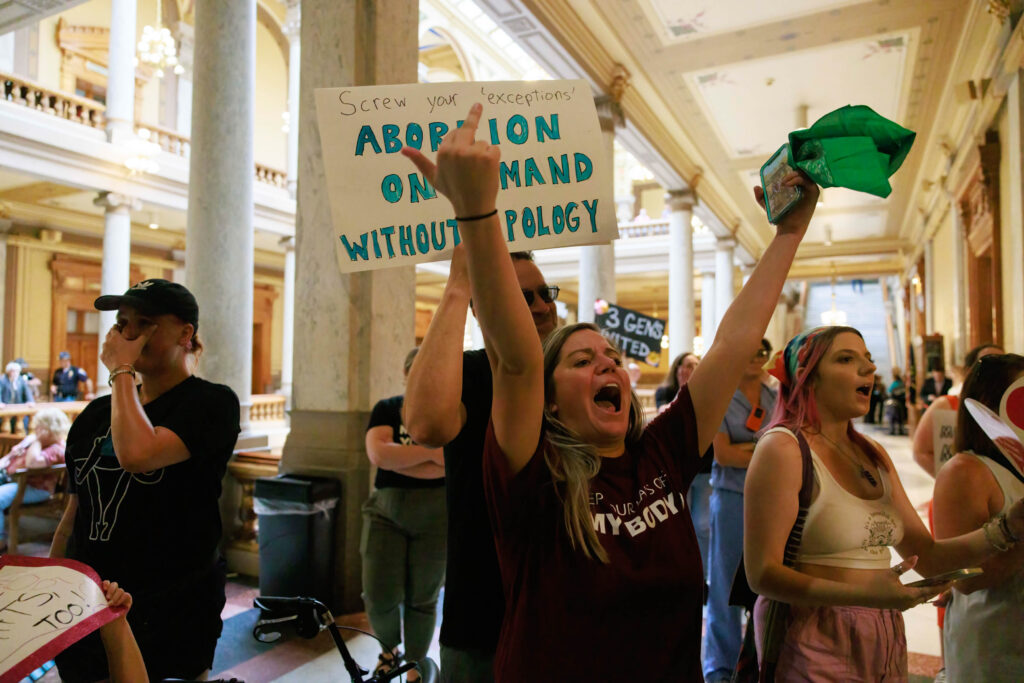 Abortion-rights protesters argue with anti-abortion activists inside the Indiana State house during the demonstration. (Jeremy Hogan/SOPA Images/LightRocket via Getty Images)

CNN reported on the development:

The GOP-authored bill states those seeking an abortion following rape or incest would have to sign an affidavit attesting to the attack. Indiana presently allows abortions up to 20 weeks after fertilization (or 22 weeks after the mother’s last menstrual period).

The bill’s sponsor, Republican state Sen. Susan Glick, had previously conceded she wasn’t happy with it, and called it a “vehicle bill” on Saturday. Glick said she expects the House will make changes, but added in its current form, the bill is an “expression of where we believe the state of Indiana is right now.” If the state House does make changes to the bill, it would come back to the Senate for another vote.

Democratic state Sen. Jean Breaux called SB1 a “flawed bill” which A “strips a woman of her right to choose.” Breaux added: “The decision whether to have a baby is a complicated balancing of responsibilities and opportunities that must be weighed by each woman, not made by politicians or Supreme Court justices.”

CNN reported that the bill passed out of a Senate committee on Tuesday, noting that Republican members voting for the bill said they hoped it would be amended in the House.