Half of Americans agree the U.S. economy is in a recession, despite the Biden administration’s dismissal, a recent Suffolk University/USA TODAY survey found.

The survey asked respondents to indicate where they believe the state of the U.S. economy lies.

The survey coincides with Thursday’s economic report, which found U.S. Gross Domestic Product (GDP) shrinking 0.9 percent in the second quarter of a year. 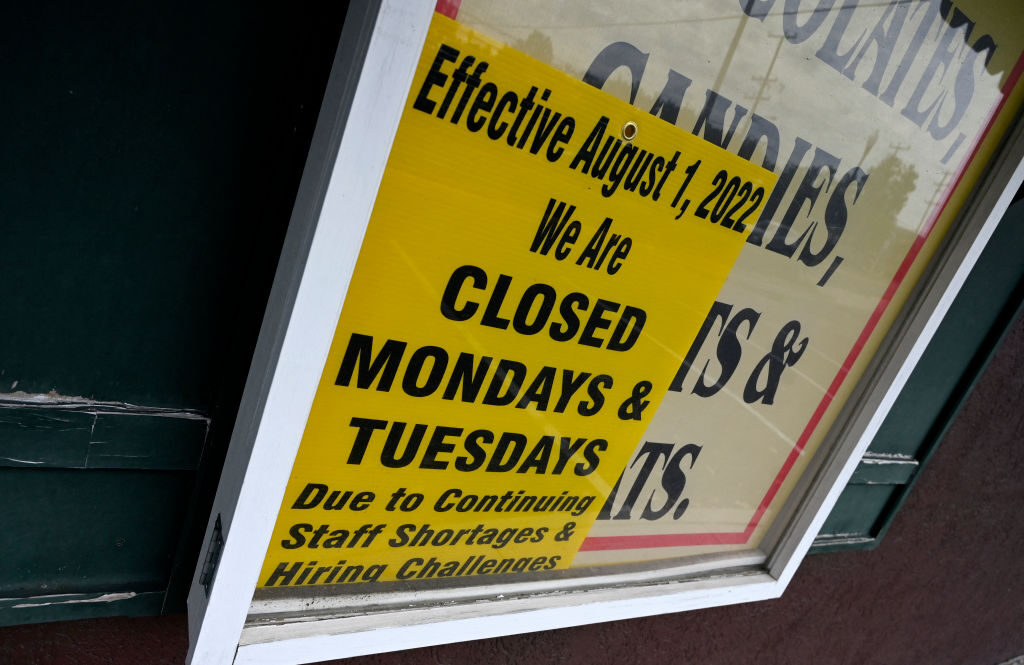 A shop displays a sign announcing reduced store hours due to a staff shortage, on July 29, 2022 in Arlington, Virginia. The U.S. economy contracted for a second straight quarter between April and June, government data showed Thursday, adding fuel to recession fears in a headache for President Joe Biden ahead of midterm elections. (OLIVIER DOULIERY/AFP via Getty Images)

That marks two consecutive quarters of negative economic growth — a reality many consider to indicate a recession:

The economy contracted by 1.6 percent in the first quarter. Many Americans consider two straight quarters of recession to be the marker of a recession. Economists, however, rely on the determination of the National Bureau of Economic Research (NBER) to say when a recession starts. The NBER has a more complex and subjective definition of recessions and typically does not declare a recession until several months after it has begun.

The Biden administration, however, is denying the commonly held belief of what comprises a recession, prompting mockery from critics:

Doocy: "If things are going so great, why are White House officials are redefining recession?"

Doocy: "It's two consecutive quarters of negative GDP growth… How is that not redefining recession?"

Jean-Pierre: "That's not the definition." pic.twitter.com/eyyvYdZWMj

Brian Deese, yesterday: "Two negative quarters of GDP growth is not the technical definition of recession.”

Deese, 2008: “Economists have a technical definition of recession, which is two consecutive quarters of negative growth.” pic.twitter.com/MzVk7drq3v

Magically for the first time ever this won’t be considered a recession.

Democrats, say it with me now:

We are in a recession.