Former President Donald J. Trump is the overwhelming favorite to land the 2024 Republican presidential nomination with a nearly 60-point lead over his closest competitor, according to a Trafalgar straw poll conducted at the Turning Point USA Student Action Summit.

The Trafalgar Group straw poll, first obtained by Fox News, asked attendees for whom they would vote if Trump and six other candidates were in contention for the Republican nomination in 2024. Trump garnered an astounding 78.7 percent of the response, followed by Gov. Ron DeSantis (R-FL), who 19 percent of participants said they would support. Gov Kristi Noem (R-SD) was the third most popular option securing one percent of the response, while former Secretary of State Mike Pompeo, Sen. Ted Cruz (R-TX), former United Nations Ambassador Nikki Haley, and former Vice President Mike Pence all polled under one percent.

Congratulations @charliekirk11 & @TPUSA_LT for putting on such a great event

Respondents were also asked how they would vote if Trump chose not to launch a presidential bid. Trafalgar provided nine options as candidates and found that DeSantis was the clear favorite, leading the field with 87 percent of the response. Donald Trump Jr. had the second highest response at 6 percent, followed by Cruz at 2.3 percent, Noem (1.5 percent), and Pompeo (1 percent). The following politicians polled under one percent: 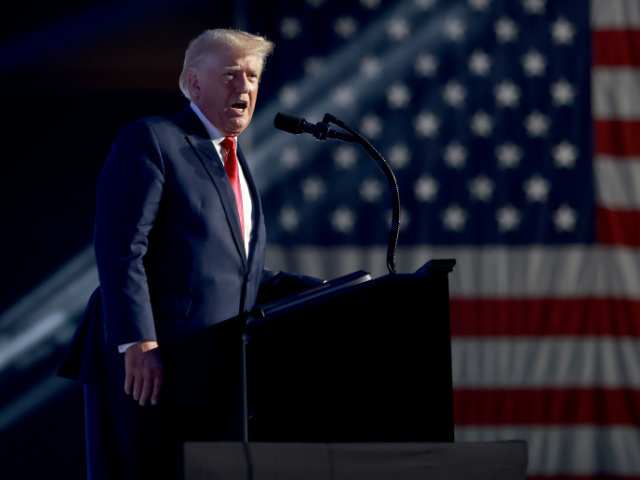 Trafalgar further found that the resounding majority of 92.7 participants disapprove of the GOP establishment in Washington, DC, while the remaining 7.3 percent approve. Moreover, 73.8 percent of straw poll participants said “[n]o” when asked if they were “confident in the GOP’s ability to communicate to younger voters.” The remaining 26.2 percent said they were confident. The poll asked whether participants believed constructing a wall at the southern border “or sending $56 billion to Ukraine is more important.” A whopping 98 percent said the border wall took priority.

Trafalgar also gauged who respondents viewed as the most difficult Democrat to beat if he or she launched a 2024 bid. Gov. Gavin Newsom (D-CA) drew 30.3 percent of the response, followed by former first lady Michelle Obama at 13.6 percent. Twice-failed presidential candidate Hillary Clinton was the third most popular answer at 10.5 percent, followed by twice-failed presidential candidate Sen. Bernie Sanders (I-VT), who garnered 10.3 percent of the response. No one else reached double-digits: