Last week, Zeldin was giving a campaign speech in Fairport, New York, when 43-year-old David G. Jakubonis allegedly tried to stab him in the neck. Jakubonis, thanks to the state’s No Bail law, was released from jail after being charged with second-degree attempted assault.

Jakubonis has since been hit with federal assault charges.

Despite its unpopularity with New Yorkers, Hochul has consistently backed the No Bail law. In an op-ed months ago, Hochul wrote that the law has been “successful” in freeing thousands of accused criminals from New York jails and urged residents to stop blaming the law for skyrocketing crime rates. 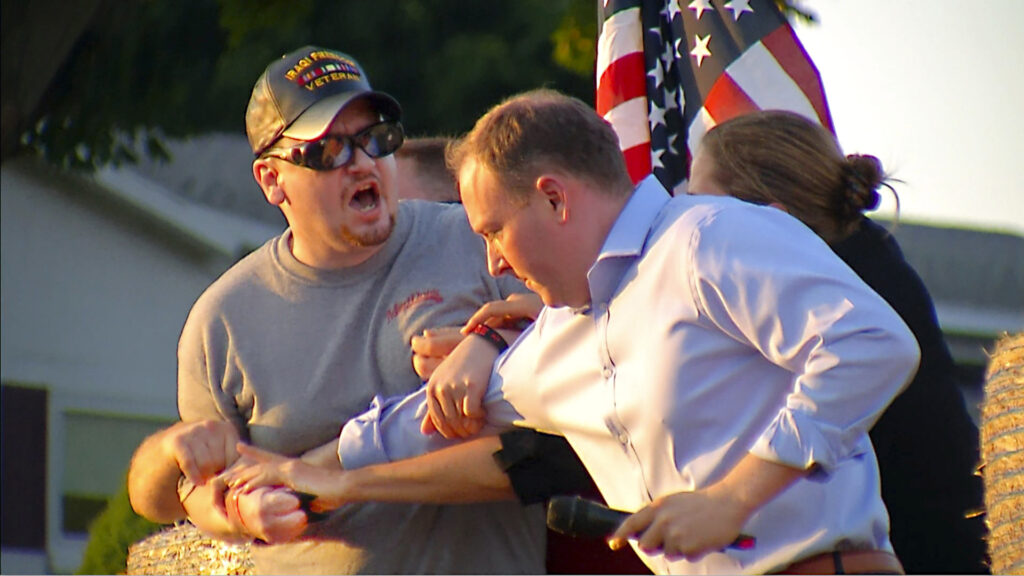 In this image taken from video provided by WHEC-TV, David Jakubonis, left, is subdued as he brandishes a sharp object during an attack U.S. Rep. Lee Zeldin, right, as the Republican candidate for New York governor delivered a speech in Perinton, N.Y., Thursday, July 21, 2022. Jakubonis, 43, has been charged with attempted assault, arraigned and released, a Monroe County sheriff’s spokesperson said. (WHEC-TV via AP)

The reforms were successful: Fewer New Yorkers are kept behind bars just because they can’t pay, and we’ve saved taxpayer dollars in the process. [Emphasis added]

Still, since the law was passed, we have seen a distressing increase in shootings and homicides. The data does not, however, suggest that bail reform is the main cause: In New York City, the percentage of people who are arraigned and released for gun crimes who go on to be rearrested has barely changed since bail reform took effect, from 25% before bail reform to 27%, according to an analysis from the New York State Division of Criminal Justice Services. Outside of New York City, that percentage went from 20% to 22%. [Emphasis added]

Blaming bail reform for the increase in violence that cities across America are facing isn’t fair and isn’t supported by the data. Doing so risks distracting us from what are likely far more significant factors: upheaval from the pandemic, the availability of illegal guns, increased gang activity, lower arrest rates and a backed-up court system, to name a few. [Emphasis added]

This year, to deal with the law’s unpopularity, Hochul worked with state Democrats to compile a package of changes to the law. The changes, though, would have continued to allow suspects accused of violent crimes, among others, to be released without bail.

Ultimately, the package failed and the No Bail law remains intact.

Meanwhile, in an exclusive interview with SiriusXM Patriot’s Breitbart News Saturday, Zeldin blasted the No Bail law and has vowed to overturn it.

“I keep hearing stories of people who get released on cashless bail, and then they go out and commit additional offenses,” Zeldin said.

“And judges in case after case, wanting to be able to keep somebody detained or setting cash bail because they are concerned about the person being a flight risk, maybe they’re concerned about an individual being dangerous, maybe it’s something in their past with a criminal record and past events, maybe its the particular seriousness of the offense,” he continued. “That discretion doesn’t exist for all sorts of different laws that are on the books.”

As Breitbart News reported earlier this year, data from January 2020 to January 2021 reveals that more than 4-in-10 suspects freed from jail by the No Bail law are later rearrested for other crimes.