The man accused of attacking Rep. Lee Zeldin (R-NY) with a sharp weapon has already been released back into society.

Zeldin, the Republican nominee for governor, was campaigning in Perinton, New York, Thursday night when the suspect, identified as 43-year-old David G. Jakubonis, walked across the stage, stopped in front of Zeldin, and appeared to thrust a weapon towards Zeldin’s neck.

Zeldin blocked the first thrust. Then the suspect was tackled.

“His fingers were like two finger holes in the blade and lunged at the congressman. And Congressman Zeldin blocked the first lunge. And then as he tried to lunge again, I grabbed him from behind and tackled him down to the ground and held him on the ground.”

Once the suspect was in custody and everything settled down, Zeldin finished his speech. Later, in a tweet, Zeldin said the alleged attacker told him “you’re done.” The Republican also predicted that due to New York’s insane bail laws, the suspect would be immediately released. “The attacker will likely be instantly released under NY’s laws,” he tweeted.

His words as he tried to stab me a few hours ago were “you’re done”, but several attendees, including @EspositoforNY, quickly jumped into action & tackled the guy.

Law enforcement was on the scene within minutes.

The attacker will likely be instantly released under NY’s laws. pic.twitter.com/wZEyIyrjFe

According to a statement later released by the Monroe County Sheriff’s Department, Jakubonis was charged with “Attempted Assault in the Second Degree (E-Felony)” and, just as Zeldin predicted, “released on his own recognizance.”

That means there was no bail involved.

This man allegedly attempts to stab another man in the throat and is “released on his own recognizance.”

Worse still, this man allegedly attempted to stab a gubernatorial candidate in the throat, a man chosen by the people of New York to represent them.

Watch the assault take place below:

If you enjoy irony, at the time of the attack, Zeldin was giving a speech about New York’s insane bail reform laws, which are undoubtedly responsible for the increase in New York’s violent crime rate.

From New York City to Buffalo, New Yorkers have witnessed firsthand the deadly consequences of cashless bail, but Governor Kathy Hochul and those controlling the State Legislature continue to put criminals over the safety of everyday citizens. In the midst of skyrocketing crime across our state, we must ensure that our brave men and women in law enforcement have the resources they need to keep our communities safe, and the ability to keep dangerous criminals behind bars is paramount. New York’s cashless bail law handcuffs justice, and It’s repeal is long overdue.

Another issue worthy of note is that Zeldin’s opponent, sitting Democrat Gov. Kathy Hochul, directed her supporters to attend Zeldin’s Thursday night event. With the claim the event would spread “dangerous lies, misinformation, and his far-right agenda at these campaign events,” Hochul urged people to RSVP the event.

So New York had a suspect in custody accused of wielding a sharp weapon at a gubernatorial candidate, what could very well have been an assassination attempt. You also have the whole thing on video. And New York sets the alleged attacker loose with no bail. None. Zip. Nada. 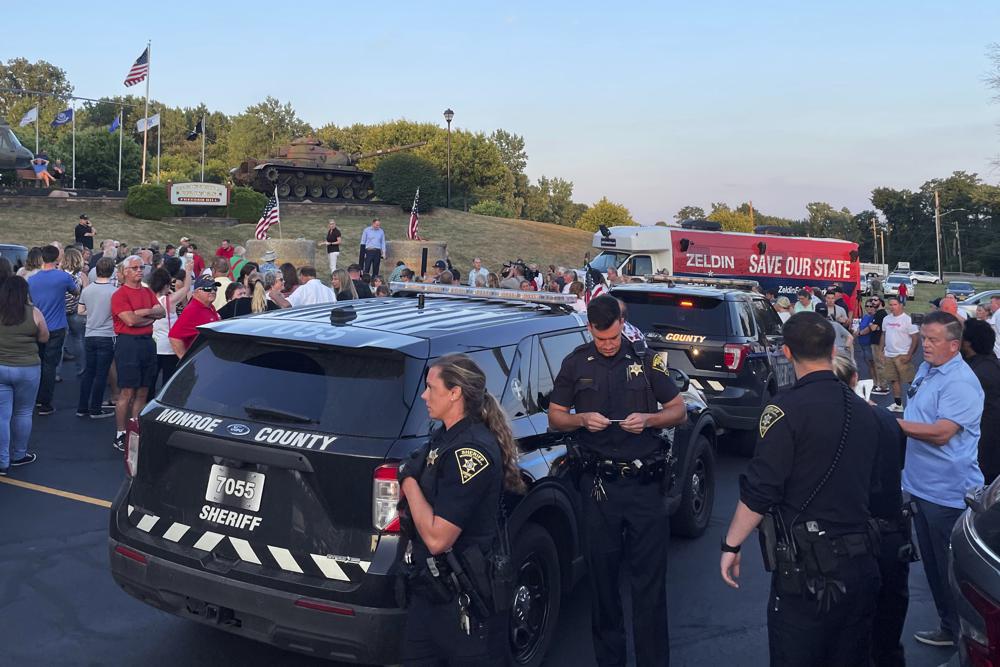 In this photo provided by Ian Winner, police officers work the scene after U.S. Rep. Lee Zeldin, the Republican candidate for New York governor, was assaulted by a man who apparently tried to stab him Thursday, July 21, 2022, in Fairport, N.Y. Zeldin escaped serious injury. (Ian Winner via AP)

Welcome to life where Democrats rule.

Democrats like Hochul want to disarm you as they release violent felons into your neighborhood.

Now ask yourself, why?