According to the United Nations and Amnesty International, roughly 15 percent of Central American migrants who seek asylum in the United States are children traveling without a parent or legal guardian.

The U.S. government classifies these children as Unaccompanied Alien Children (UAC), who are to receive special protections pursuant to the Trafficking Victims Protection Reauthorization Act (TVPRA) and other legislation. In 2021, American shelters received a record 122,000 UACs, and unaccompanied children continue to stream toward our borders.

At first glance, extending a warm welcome to children who are allegedly fleeing persecution would seem to be a noble goal. However, given our combined 60 years’ experience in immigration enforcement, we can tell you that rosy images of the United States offering refuge to suffering kids are the stuff of Hollywood fantasy, not border zone reality.

The TVPRA, rather than protecting kids, has actually become a conduit for trafficking children. Alien smugglers know that, with the exception of Mexican nationals, Customs and Border Protection processes all UACs within 48 hours, whenever possible. They are then turned over to the Department of Health and Human Services (HHS), which places the children in the custody of a family member who is already in the U.S., a non-family temporary guardian or in an HHS facility.

The net result is a government-operated fast-lane into the interior of the United States. Their immigration hearings can last several years. Even though the vast majority will never get relief from U.S courts and get ordered removed, only 3 percent will actually leave as ordered according to the Homeland Security Lifecycle Report. 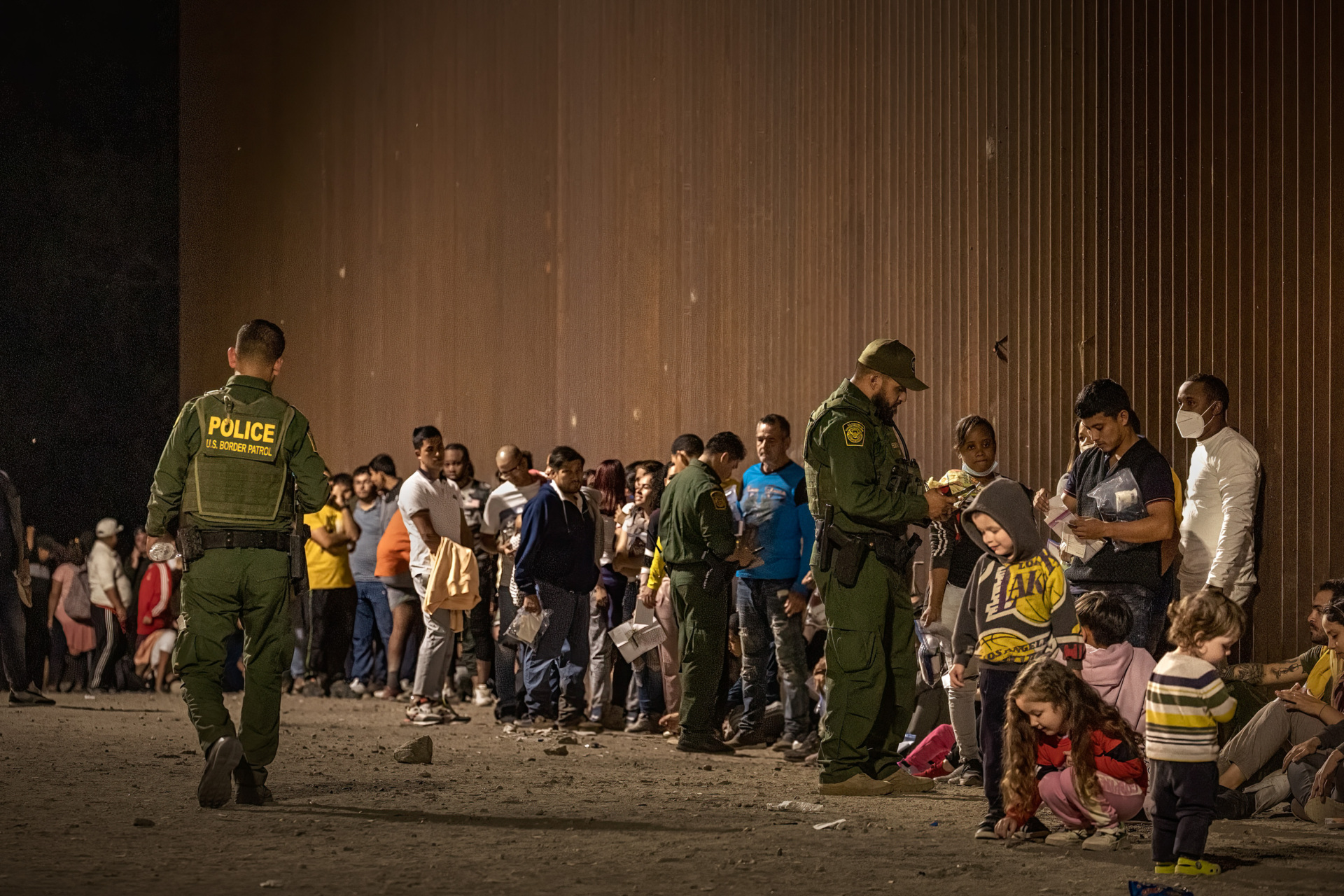 U.S. Border Patrol agents check for identification as migrants wait to be processed after crossing the border from Mexico on June 22, 2022, in Yuma, Arizona. (Qian Weizhong/VCG via Getty Images) 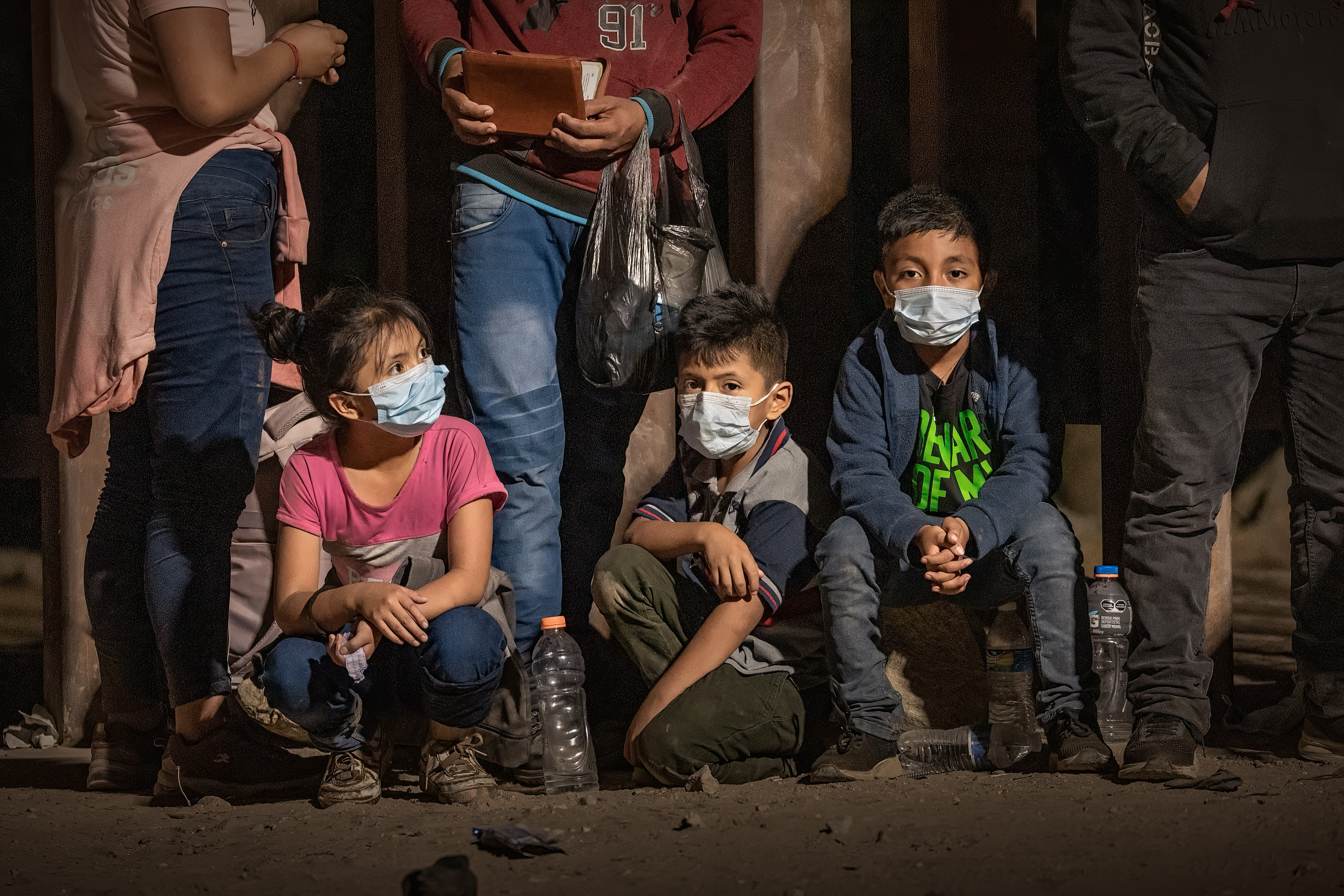 Migrants wait to be processed by the U.S. Border Patrol after crossing the border from Mexico on June 22, 2022, in Yuma, Arizona. (Qian Weizhong/VCG via Getty Images)

The problems only get worse from there. Smugglers and other immigration law breakers know full well that the children can easily escape from HHS facilities and foster homes and remain in the U.S. with little fear of being discovered. In fact, it is so easy for these kids to disappear that the U.S. government has lost approximately 20,000 of them.

Where do these kids end up? The UK’s Independent noted in 2021 that HHS has a very poor record of properly vetting temporary guardians, and an alarming number of UACs have been forced into involuntary servitude. According to a Congressional report, in 2014 HHS placed alien minors with “sponsors” who were actually human traffickers.

The traffickers forced those children to work as slave labor on egg farms in Ohio. Such complete malfeasance upon the part of HHS necessarily raises the question, how many kids have been released to sex traffickers who forced them into prostitution?

There is also significant evidence that many of the UACs are – far from being innocent victims – actually hardened members of criminal gangs. In November 2017, U.S. Immigration and Customs Enforcement (ICE) conducted Operation Raging Bull, which resulted in the arrest of 214 MS-13 gang members. One-third of those arrested entered the United States as unaccompanied minors. Soon after, another operation conducted by ICE was Operation Matador that resulted in the arrest of nearly 500 gang members. Approximately 40 percent of those gang members entered the U.S. as a UAC or part of a family unit youth. 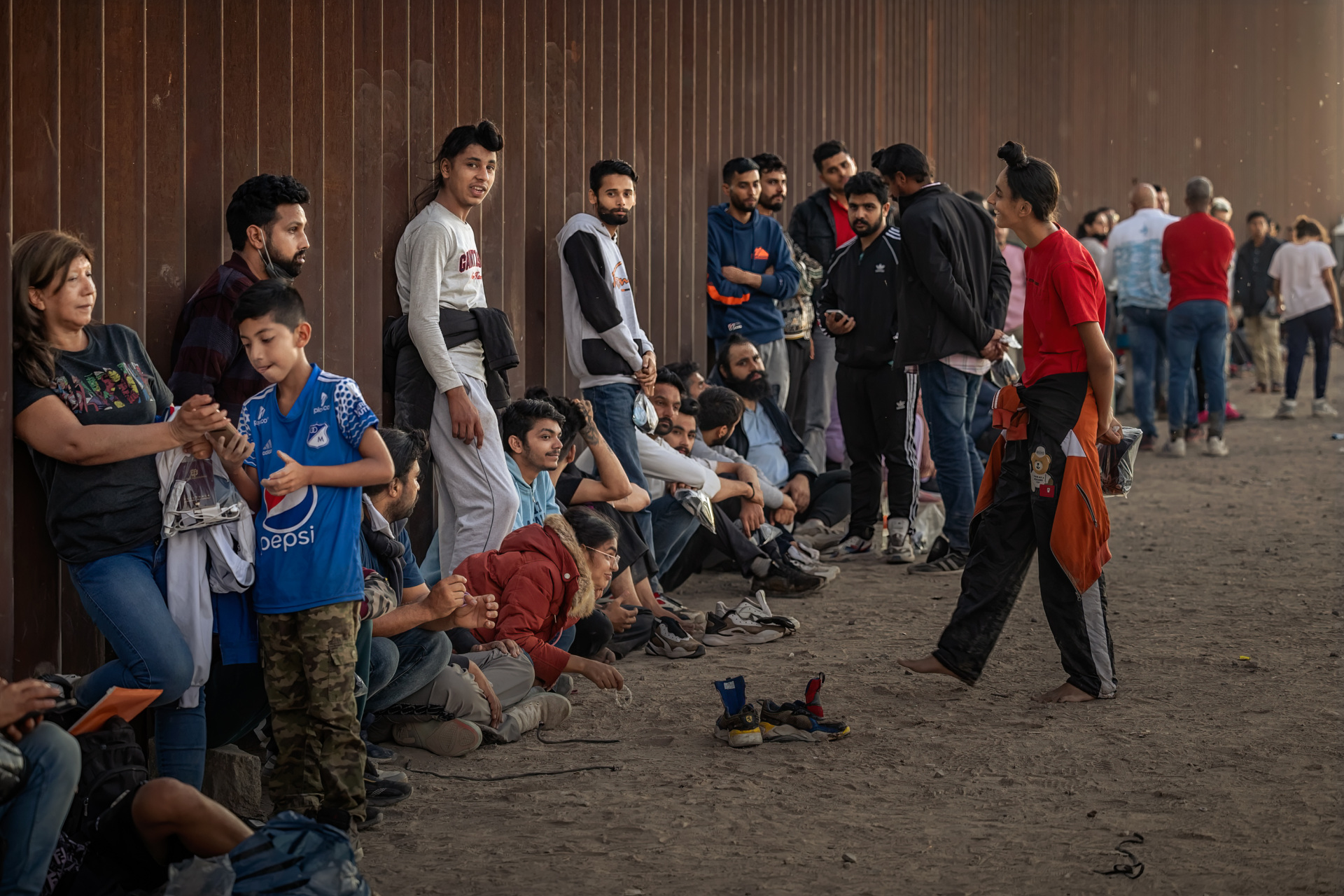 Migrants wait to be processed by the U.S. Border Patrol after crossing the border from Mexico on June 23, 2022, in Yuma, Arizona. (Qian Weizhong/VCG via Getty Images) 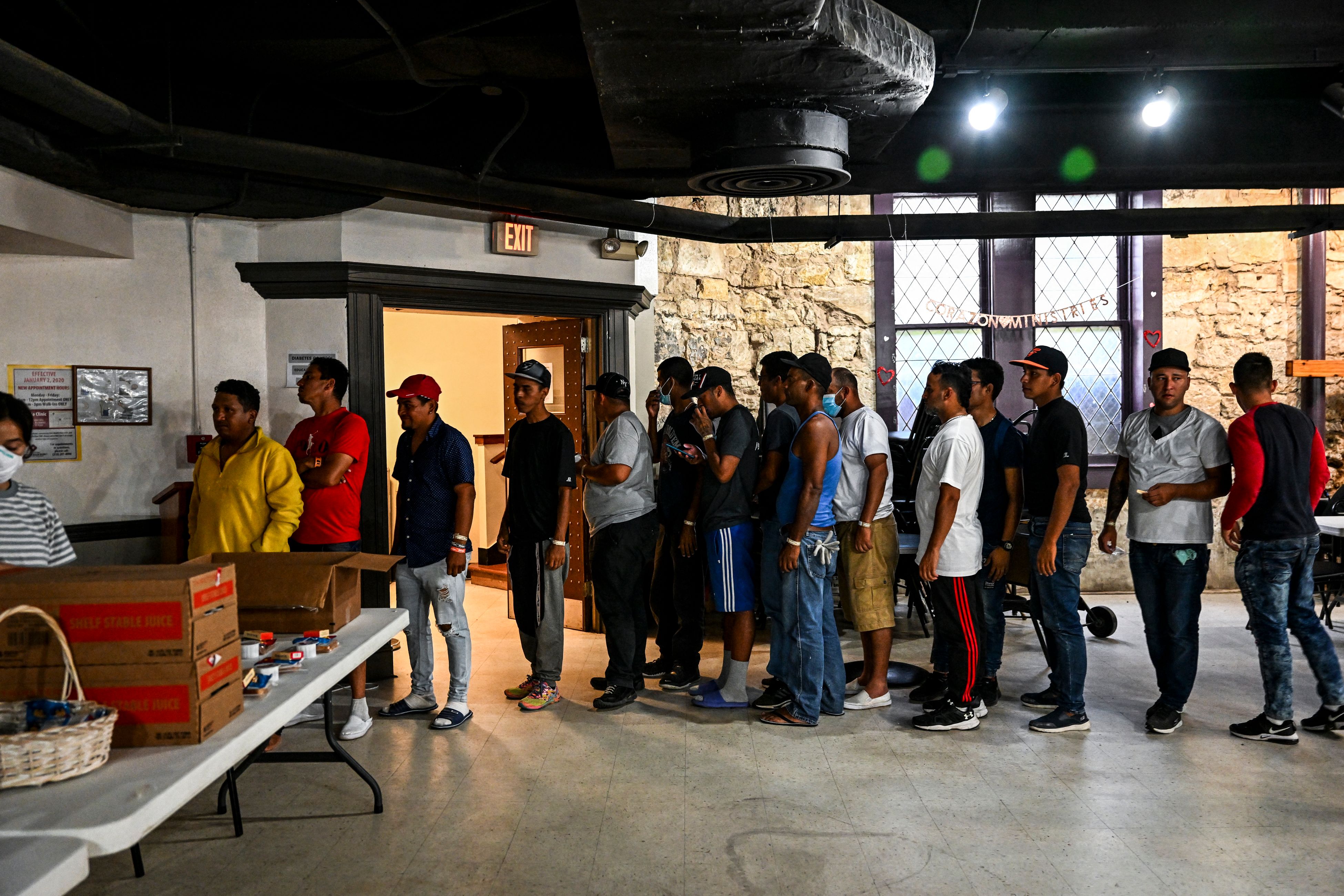 Migrant men stand in line for food at a shelter in San Antonio, Texas, on June 29, 2022. (CHANDAN KHANNA/AFP via Getty Images)

However, we have seen internal DHS documents indicating that the percentage of UACs with gang affiliations may be significantly higher. In fact, the UAC program makes it so easy for criminals to enter the U.S. that over 600 individuals apprehended by CBP were later determined to be adults posing as children.

And here’s the real kicker: this kid-migration pipeline – which does far more to endanger vulnerable children than it does to protect them – is costing American taxpayers hundreds of millions of dollars.

As of April 2021, the Biden administration was spending $60 million a week to shelter UACs. That’s a massive expenditure, especially when HHS doesn’t seem to have any reasonable idea of what children are in its custody, where they are being housed, or who is caring for them. But instead of auditing the program, Team Biden just awarded its progressive cronies at the Vera Institute a $171.1 million contract to help UACs avoid removal from the United States. 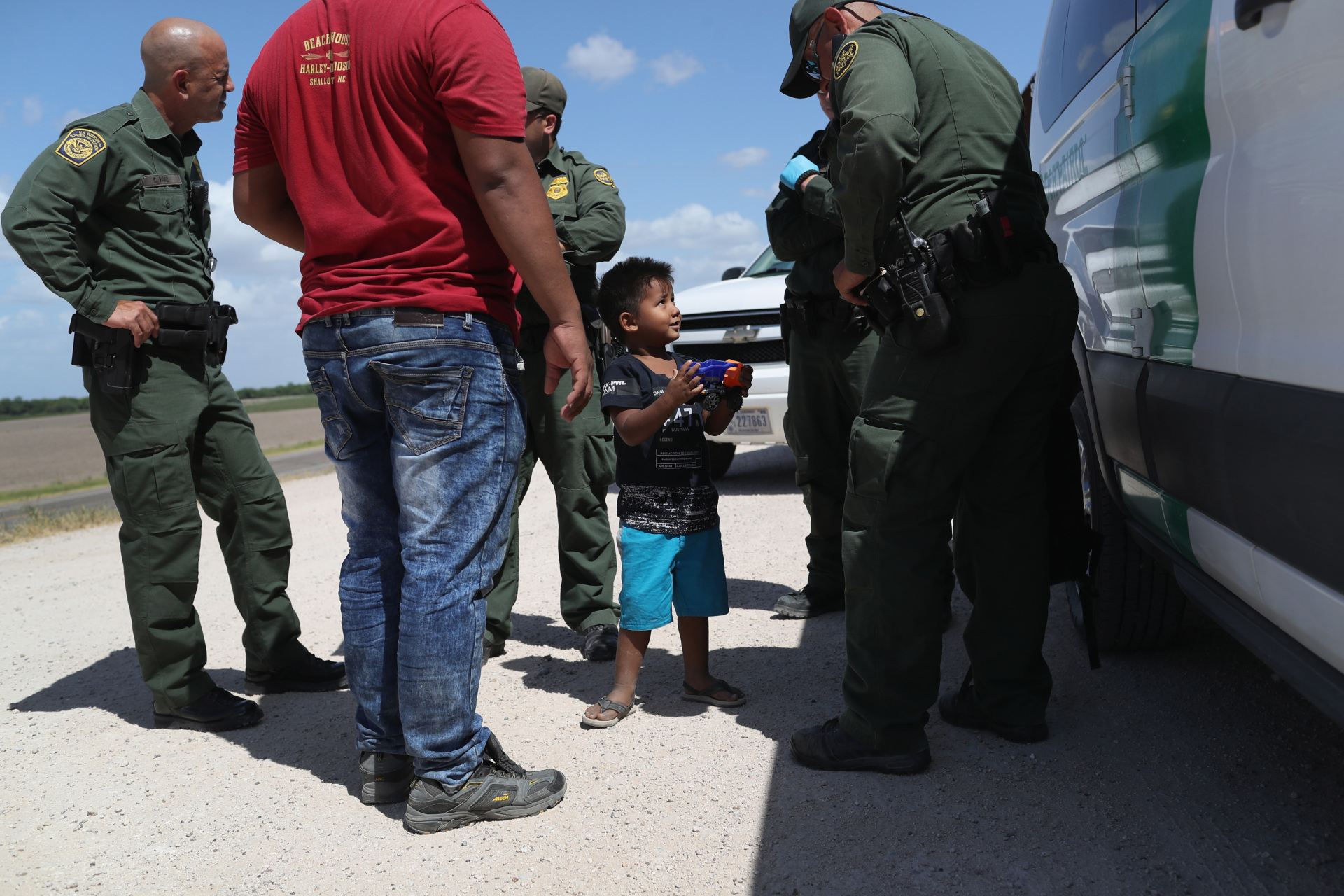 A boy and man from Honduras are taken into custody by U.S. Border Patrol agents near the U.S.-Mexico Border on June 12, 2018, near Mission, Texas. (John Moore/Getty Images) 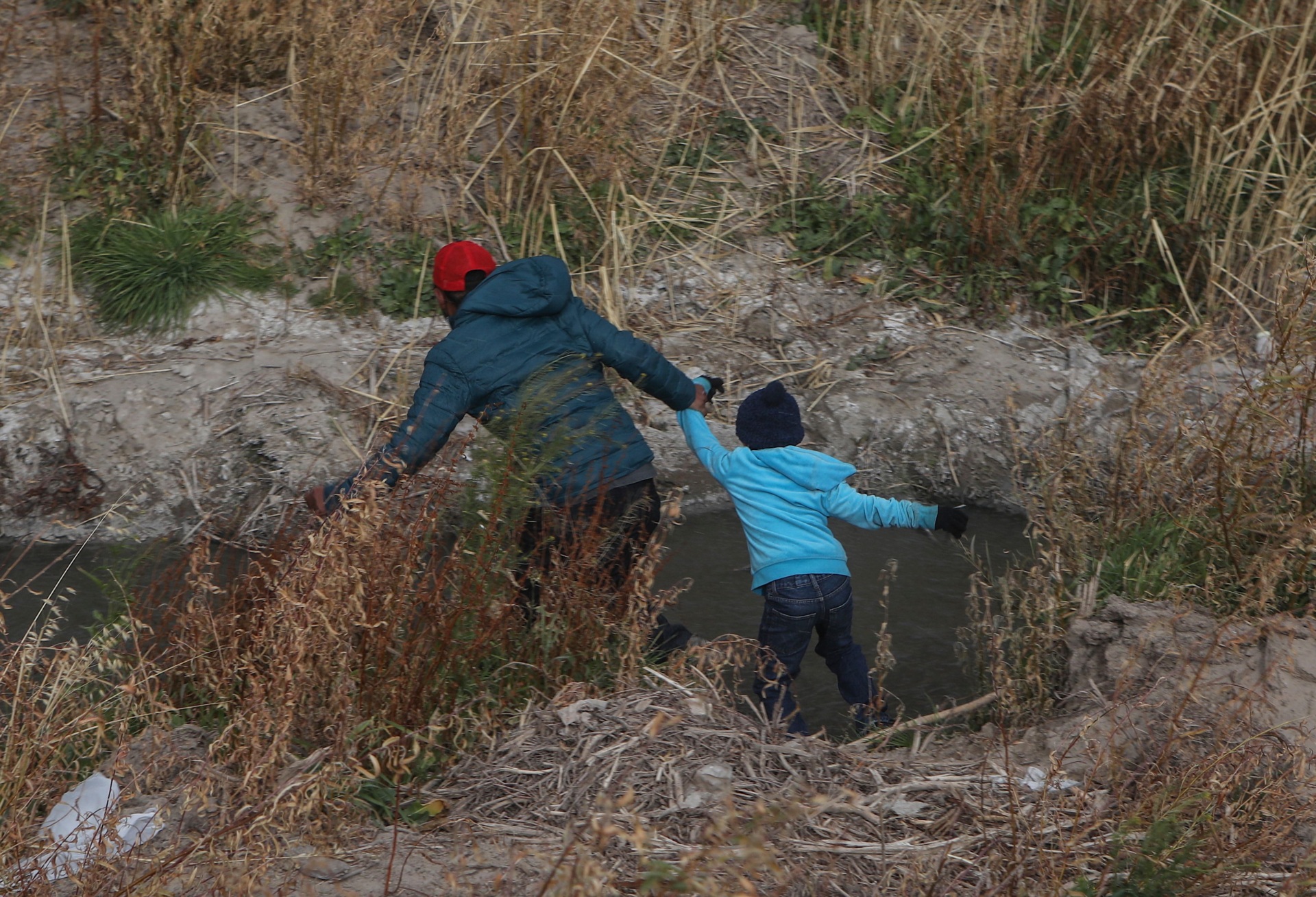 A Guatemalan adult migrant man and boy cross the U.S.-Mexico border at the Rio Grande between El Paso, Texas, and Ciudad Juarez, Chihuahua, on January 26, 2021. (HERIKA MARTINEZ/AFP via Getty Images)

Based on all of the above, it seems safe to say that the federal government isn’t ensuring the safe and orderly migration of desperate children in need of protection. Rather, it is aiding and abetting transnational criminal organizations by running the world’s most sophisticated and expensive child trafficking ring. Every American who cares about children – whether those kids are born in the United States or not – should be demanding their elected representatives to stop this madness as quickly as possible.

This is easy to fix. Congress needs to change the TVPRA and make clear that children from non-contiguous countries are treated the same as children from Mexico. If it is ascertained that the UAC is not a victim of trafficking, that UAC should be immediately removed back to their country, the same as UACs from Mexico.

Tom Homan is a senior fellow at the Immigration Reform Law Institute and the former acting director of Immigration and Customs Enforcement.

Matt O’Brien is the Director of Investigations at the Immigration Reform Law Institute, and previously served as an Immigration Judge.