Former Missouri State Legislator Maria Chappelle-Nadal (D), a radical leftist who called for the assassination of then-President Donald Trump in 2017, exclusively told Breitbart News that she “worked very well” with Missouri Attorney General Eric Schmitt, a Republican candidate for U.S. Senate in Missouri, while they were in the State Senate together.

In response, Schmitt’s campaign devolved into a meltdown level of attacks against his biggest opponent in the GOP primary and refused to say whether he regrets working with Chappelle-Nadal to champion big bipartisan deals that Democrats like and conservatives do not.

Chappelle-Nadal sent out a tweet in January with a photograph showing her and Schmitt smiling side by side. The caption she put on the photograph reads: “7 years ago today. We are still moving mountains.” 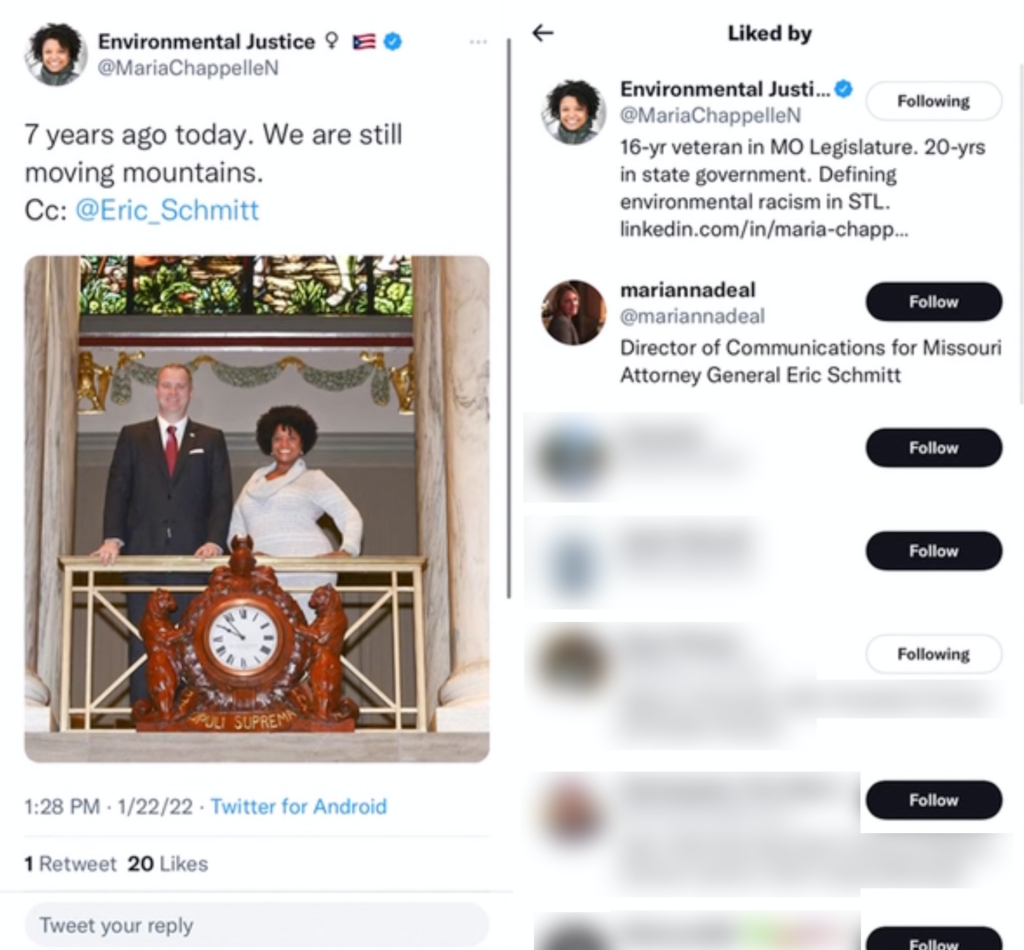 Mariana Deal, Attorney General Schmitt’s Director of Communications, liked the tweet, which came years after Chappelle-Nadal called for Trump’s assassination in 2017. The early 2022 tweet is not publicly visible at this time as Chappelle-Nadal’s tweets are protected. It is unclear when the Twitter account went private, and if it was public at one point this year or not–but the date of the tweet is just weeks before Schmitt hosted a fundraiser at Trump’s luxurious seaside Palm Beach resort Mar-a-Lago in early 2022.

The shocking photograph and caption raise concerns around Schmitt’s ties to the far left and exactly what “mountains” the pair have moved together. After refusing to resign, she continued her radical streak. For instance, Chappelle-Nadal in 2018 demanded during a debate over a tax bill that the state legislature create a reparations policy for black Missourians due to slavery and asserted that then-Sen. Claire McCaskill (D-MO) was “no different” than Republicans.

“Neither one of them give a heck about the black community, only the votes,” Chappelle-Nadal said on the floor of the Senate.

Breitbart News reached out to Chappelle-Nadal on Wednesday regarding the social media post. In response, she spoke glowingly of Schmitt–praising their working relationship and discussing several areas in which they pushed bipartisan initiatives together.

“Senator Schmitt and I worked very well together from opposite sides of the aisle while serving in the Missouri Senate,” Chappelle-Nadal told Breitbart News. “He took the lead in the senate to address predatory fines by municipalities shortly after the Ferguson Uprising. Senator Schmitt also supported my legislation giving disadvantaged and minority students educational alternative opportunities.”

When asked to specify what she meant by “moving mountains,” Chappelle-Nadal said: “both Eric and I immensely care about St. Louis County residents and work separately to ensure individual rights are upheld.”

“It is always more fruitful when opposing parties can work together where there is agreement policy-wise,” she added.

She also denied being approached by Schmitt or his campaign to conceal the image, adding she tweeted the image “as a nice memory,” and provided Breitbart News with additional pictures from “Seersucker Wednesday” (seen below), which she noted is “a bipartisan tradition that continues today.” In those pictures, among others, Schmitt and Chappelle-Nadal appear together.

In August 2017, after Trump said there was “blame on both sides” for the violence at the Charlottesville Unite the Right rallies, then-State Sen. Chappelle-Nadal (D) took to Facebook and wrote, “I hope Trump is assassinated!,” as Breitbart News reported at the time. After public outrage, Chappelle-Nadal apologized and deleted the post, but refused to resign despite bi-partisan censures and calls for her forfeiture of office.

“I am not resigning … What I said was wrong, but I am not going to stop talking about what led to that, which is the frustration and anger that many people across America are feeling right now,” she told the St. Louis Post-Dispatch.

Chappelle-Nadal’s comments led to a U.S. Secret Service investigation into whether her hope that Trump was assassinated was a serious threat or not. It also led to multiple bipartisan calls for her resignation, including from the state’s Democratic Party chairman at the time, Stephen Webber, and then-Gov. Eric Greitens (R-MO), a Republican who Schmitt is now running against for the GOP nomination for U.S. Senate.

As CNN noted, Webber said at the time:

State Senator Chappelle-Nadal’s comments are indefensible. All sides need to agree that there is no room for suggestions of political violence in America – and the Missouri Democratic Party will absolutely not tolerate calls for the assassination of the President. I believe she should resign.

“We can have differences in our country, but no one should encourage political violence,” said then-Gov. Greitens. “The senator should resign.”

“I condemn it,” said McCaskill, per the Post-Dispatch.  “It’s outrageous. And she should resign.”

Schmitt’s U.S. Senate campaign insists that he did at the time support having Chappelle-Nadal removed from office but has not provided any proof of that when asked for it. The campaign did however say Schmitt condemns the comments now, and would have voted for her removal from office if he had still been in the state senate and had a vote. At that point, he was serving as the Missouri Treasurer.

In a later email sent after the first comment, Chrismer claimed that Schmitt did in fact speak out against her at the time. “Also, to be crystal clear, General Schmitt thought her comments were outrageous, said as much in local radio interviews at the time, and was very much in favor of removing her from office and would have voted to do so if he had a vote,” Chrismer added.

Nonetheless, the mere fact that Schmitt has a penchant of working with such people on big-picture policy items raises serious concerns as to whether he would be just another establishment Republican in the Washington swamp if elected. With the right furious right now at people like Sen. John Cornyn (R-TX) for cutting a gun control deal and Senate GOP leader Sen. Mitch McConnell (R-KY) backing key elements of the Democrat agenda like the bipartisan infrastructure framework, or BIF, gives lots of conservatives pause when considering candidates in GOP primaries.

In a follow-up statement when pressed further, Chrismer refused to say whether Schmitt regrets working with Chappelle-Nadal in the Missouri legislature and refused to say whether he would take that mentality and track record of working with Democrats on big bipartisan deals to Washington. Instead, he just pointed to several Republicans who have endorsed Schmitt’s campaign.

“Attorney General Schmitt’s conservative pro-Trump record is beyond reproach, which is why leading conservative organizations including Senate Conservatives Fund and conservative leaders like Ted Cruz, Mike Lee, and Matt Whitaker have endorsed him,” Chrismer said.

These revelations could have serious implications in the U.S. Senate primary between Schmitt and Greitens, among other candidates. RealClearPolitics’ polling average has Greitens in front of the field,  with Schmitt and Rep. Vicky Hartzler (R-MO) not far behind.  Like Cruz has endorsed Schmitt, Hartzler’s biggest benefactor is also another U.S. Senator, Sen. Josh Hawley (R-MO) from Missouri. Greitens, Schmitt, and Hartzler have all been vying for Trump’s endorsement in the final weeks of one of the last major U.S. Senate primaries, in which Trump has yet to endorse. Trump’s endorsements this cycle in GOP U.S. Senate primaries are perfect–he was won every single one he was weighed in on–so it goes without saying that all of them want to be in Trump’s good graces.

Last week, Trump bashed Hartzler in a post on his Truth Social account, ruling out endorsing her and effectively ending any shot she has at the GOP nomination for Senate in Missouri. Schmitt’s decision to maintain a close relationship with this radical Democrat Chappelle-Nadal despite her call to have Trump assassinated is also likely to rip open raw distrust between Trump and Schmitt, especially given the fact that’s Trump’s close friend Shinzo Abe, the former Japanese prime minister, was assassinated just last week in Japan. That Schmitt has not cut all ties with this particular Democrat would certainly make one wonder whether he could stand up to such radical Democrats in the U.S. Senate if elected.

Instead of substantively addressing these issues, and saying whether he would continue to work with such people down the road, Schmitt’s campaign decided to just engage in the same tired GOP establishment talking points attacks against Greitens in the rest of the two comments his campaign sent to Breitbart News.

Chrismer claimed in his first statement that this story is “nothing more than a desperate attempt by Eric Greitens to salvage his failing campaign and hide the fact he abused women and his children, attacked President Trump during the 2016 campaign, distanced himself from the President as governor and quit on Missouri and the America First agenda. Greitens is a loser and who the Democrats want as the nominee because they know he would lose Missouri’s Republican U.S. Senate seat.”

In his second email, Chrismer again attacked Greitens rather than addressing the substance of Schmitt enabling radical leftism, saying that these “false assertions and attacks on his conservative record are desperate attempts by the Greitens’ campaign to hide Greitens’ record as a pro-choice Democrat who traveled to the 2008 Democrat Convention to watch Barack Obama receive their party’s nomination with glowing admiration, and Greitens’ attacks on President Trump at the height of the 2016 Presidential campaign. Eric Greitens is Chuck Schumer’s preferred candidate.”

Those talking points are the very same that top establishment GOP officials like Mitch McConnell (R-KY) and consultant Karl Rove are spreading around in their attacks against Greitens as they get increasingly desperate to stop him – Greitens is the first major candidate for U.S. Senate this year to publicly pledge to oppose McConnell for GOP leader, something Schmitt has outwardly refused to do – because of the threat he represents to their power structure.