Karlan drew the ire of the Trump family when she testified testified that “the Constitution says there can be no titles of nobility, so while the president can name his son Barron, he can’t make him a baron.”

Karlan’s mocking of Trump’s son prompted a rare response from former First Lady Melania Trump, who said Karlan should “be ashamed” of her “very angry and obviously biased public pandering.”

After her testimony during Trump’s impeachment proceedings, Karlan joined the Biden Administration. However, Karlan reportedly earned $1.19 million from Stanford University while she worked in Biden’s Department of Justice (DOJ).

From 2020 through March 2021, Karlan earned $1.19 million from Stanford, according to an April 2021 disclosure form. Karlan claimed she was being paid her “normal salary” from Stanford, minus her summer stipend.

The Stanford law professor joined the Biden administration in February 2021, less than one month after Biden’s inauguration.

Karlan left her post in the Biden administration on July 1, just one day before the DOJ provided FOIA documents to AAF. 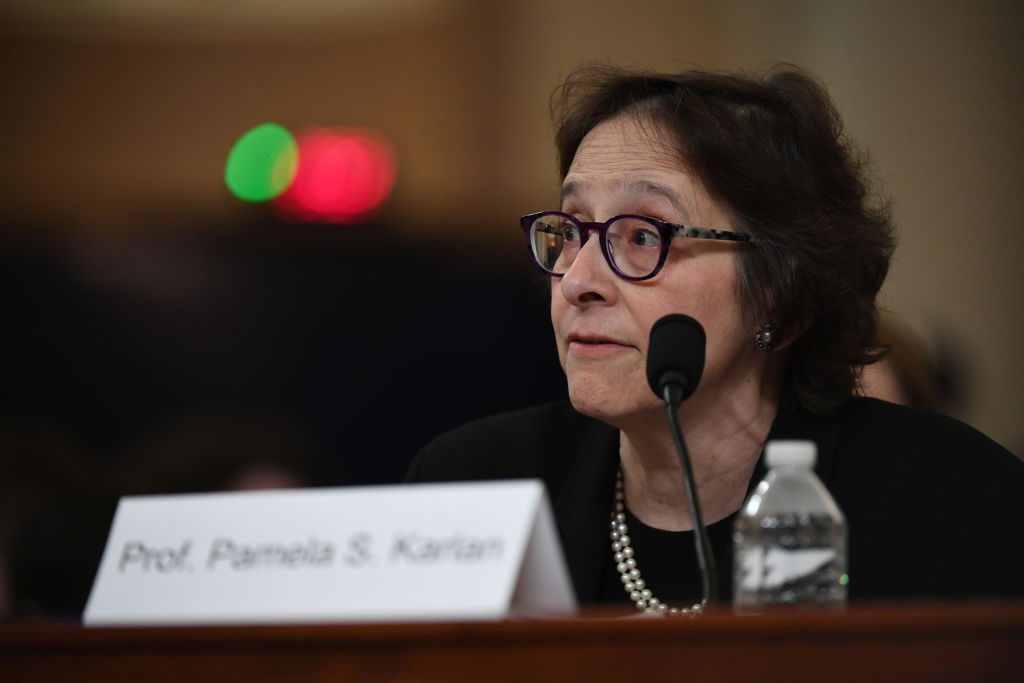 The new documents clarified that Karlan actually led the department’s Civil Rights Division during the early days of Biden’s administration. At the time, the division was investigating aspects of then-New York Gov. Andrew Cuomo’s COVID-19 nursing home scandal. The division closed that probe in July 2021.

The new documents said that the Justice Department would transfer to Stanford $183,100 per year in lieu of paying Karlan directly — a nod to upper-tier federal wages, despite the fact that Stanford continued to pay Karlan much more.

AAF president Tom Jones was elated that Karlan left the Justice Department after the AAF’s inquiries into her finances.

As the old cliche goes, you cannot serve two masters. Pamela Karlan was a paid employee at Stanford University when she was supposed to be serving the Department of Justice. President Biden and [Attorney General] Merrick Garland enabled this unethical sweetheart deal to go after Americans. We’re glad that after our inquires into this extremist Trump-impeachment witness Pamela Karlan has quietly disappeared from the DOJ.

“How can Biden’s DOJ justify hiring Pamela Karlan for a top perch in the Civil Rights Division?” Nehls asked. “This is corruption at its finest — and it’s not the first time the Biden DOJ has been guilty of it.”

“Biden wants you to believe that his DOJ is a non-partisan, justice-serving institute. The truth is his DOJ is the Left’s politically motivated Gestapo appointed to fast-track their radical agenda and stamp out conservative opposition,” Nehls said.