“Many of the things that we thought of as ‘misinformation’ just a short while ago are now accepted as fact,” Joe Rogan said on a Sunday message posted on Facebook.

Rogan’s remarks come amid an ongoing censorship campaign launched by other artists on the Spotify platform, who feel that Rogan’s podcast spreads misinformation about the coronavirus. Spotify is a Sweden-based audio-streaming service that hosts the Joe Rogan Experience.

Rogan identified his recent interviews with Drs. Robert Malone and Peter McCullough — with both discussions focusing on the COVID-19 and related policies and standards of care — as primary targets of the censorship campaign being waged against him.

My thoughts on the latest controversy with @spotify

I think there’s a lot of people that have a distorted perception of what I do, maybe based on sound bites or based on headlines of articles that are disparaging. The podcast has been accused of spreading ‘dangerous misinformation,’ specifically about two episodes — a little bit about some other ones — but specifically about two. One with Dr. Peter McCullough and one with Dr. Robert Malone.

Both these people are very highly credentialed, very intelligent, very accomplished people, and they have an opinion that is different from the mainstream narrative. I wanted to hear what their opinion is. I had them on, and because of that — those episodes in particular — those episodes were labeled as being ‘dangerous,’ they had “dangerous misinformation” in them.

The problem I have with the term ‘misinformation,’ especially today, is that many of the things that we thought of as ‘misinformation’ just a short while ago are now accepted as fact. Like, for instance, eight months ago, if you said, ‘If you get vaccinated, you can still catch COVID and you could still spread COVID,’ you’d be removed from social media. They would ban you from certain platforms. Now, that’s accepted as fact.

All of those theories that at one point in time were banned, were openly discussed by those two men that I had on my podcast, that have been accused of [spreading] ‘dangerous misinformation.’

Spotify Co-Founder Daniel Ek responded to the censorship campaign on Sunday via statement. He said Spotify would add a “content advisory” to all hosted content involving “discussion about COVID-19” that would direct users to a “COVID-19 Hub” including “links to trusted sources:

We are working to add a content advisory to any podcast episode that includes a discussion about COVID-19. This advisory will direct listeners to our dedicated COVID-19 Hub, a resource that provides easy access to data-driven facts, up-to-date information as shared by scientists, physicians, academics and public health authorities around the world, as well as links to trusted sources. This new effort to combat misinformation will roll out to countries around the world in the coming days. To our knowledge, this content advisory is the first of its kind by a major podcast platform.

Rogan stated a promise to add more “balance” to “controversial viewpoints.” He remarked:

My pledge to you is that I will do my best to try to balance out these more controversial viewpoints with other people’s perspectives so we can maybe find a better point of view.

I don’t want to just show the the contrary opinion to what the narrative is. I want to show all kinds of opinions so that we can all figure out what’s going on, and not just about COVID,  about everything, about health, about fitness, wellness, the state of the world itself.

It’s a strange responsibility to have this many viewers and listeners. It’s very strange, and it’s nothing that I prepared for, and it’s nothing that I ever anticipated. I am going to do my best in the future to balance things out. I’m going to do my best, but my point of doing this is always just to create interesting conversations and ones that I hope people enjoy.

Rogan said he is a fan of Neil Young and Joni Mitchell, two Canadian singer-songwriters who withdrew their music from Spotify in protest of the streaming platform’s hosting of Joe Rogan’s podcast. 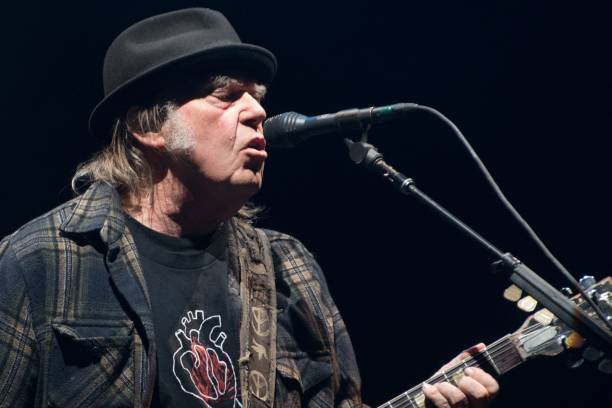 Neil Young performs on stage for his first time in Quebec City during 2018 Festival d’Ete on July 6, 2018. (Photo by Alice Chiche / AFP) (Photo by ALICE CHICHE/AFP via Getty Images)