LOS ANGELES, California — Gov. Gavin Newsom apologized Friday for using the term “gangs” to describe groups of people who have been attacking and robbing cargo trains near downtown Los Angeles, as he toured the wreckage.

As Breitbart News reported, Newsom arrived at the site and helped a cleanup crew, just days after viral video showed thieves targeting the trains, and debris scattered in every direction, showing torn cardboard boxes that will never reach their destinations.

Newsom professed shock at the devastation, saying it made California look like a “Third World country.”

“I’m asking myself, what the hell is going on? We look like a third-world country," @GavinNewsom says at site of L.A. train theft

“This is not one-off. This is organized theft. These are organized gangs of people,” Newsom says, then apologizes for saying “gangs,” says wasn’t “pejorative”

Some left-wing scholars and activists, as well as some journalists, consider the term “gang” to be pejorative or even racially-loaded, even in the context of a criminal enterprise.

It is not clear whether the thefts are organized, or random. 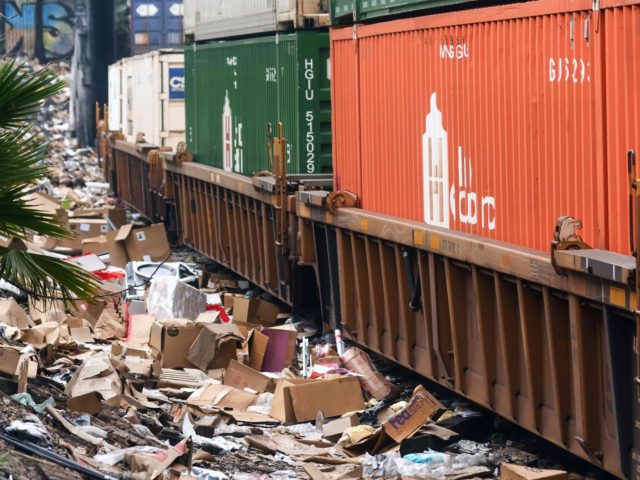 LOS ANGELES, CALIFORNIA – JANUARY 19: A Union Pacific freight train passes along a section of tracks littered with debris from packages stolen from cargo containers stacked on rail cars on January 19, 2022 in Los Angeles, California. The area has seen numerous thefts of the containers aboard trains which sometimes are required to stop in the area on their way to other destinations. Union Pacific has seen a 160 percent increase in rail thefts in Los Angeles County over the past year. Many of the packages are from Amazon and other retailers. (Photo by Mario Tama/Getty Images)

As Breitbart News noted, the Union Pacific rail line has written to left-wing, George Soros-backed L.A. District Attorney George Gascón, threatening to route rail traffic around L.A. if he did not crack down on rail theft in a serious manner.

Gascón has pursued “criminal justice reform” as Los Angeles has suffered a wave of violent crime.

L.A. County Sheriff Alex Villanueva, who opposes Gascón’s policies, told the Fox News Channel on Friday that Newsom is part of the problem.

“Well, we have the governor picking up trash around the rail yard because of the rash of rail thefts that are plaguing Union Pacific rail lines. And he says he wants prosecution, but then he turns around and endorses George Gascón, who does not prosecute thefts,” Villanueva said.

“He’s legalized petty theft…without a proper prosecution, it does us no good or very little good to just arrest people that are going to be released immediately. So, that part of the equation is missing.”