Republicans in Missouri are advocating for a 7-1 congressional map in their favor after the Missouri House approved a 6-2 map that maintains current party divisions.

Missouri Republicans initially proposed a 7-1 map in their favor, but the Missouri House instead approved a 6-2 map by an 84-60 vote. The 6-2 map would maintain the same balance as the state’s current congressional map.

Missouri House Republicans hope to gain support from 25 additional members to reach the 109 vote threshold necessary to include an emergency clause, allowing the state to implement the maps before the upcoming primary elections in August. 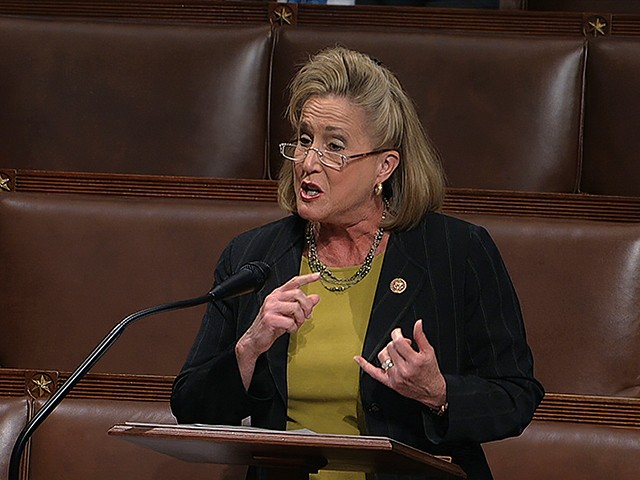 In this image from video, Rep. Ann Wagner (R-MO) speaks on the floor of the House of Representatives at the U.S. Capitol in Washington, Thursday, April 23, 2020. (House Television via AP)

The battle of the two maps led to internal conflict among Missouri’s Republican politicians. Although the 6-2 map passed the state House with Republican support, some of the more conservative politicians would like to see the 7-1 map approved.

“This is a fair bill, a fair map,” said Missouri state Rep. Dan Shaul, who chairs the House Special Committee on Redistricting.

The Missouri Senate’s Conservative Caucus, Missouri Right to Life, Secretary of State Jay Ashcroft, and former Gov. Eric Greitens have been pushing for the initial 7-1 map.

Republican support of the approved 6-2 map stems largely from fears of being defeated in court by Democrat activists. The Democrats have been preparing for court battles involving this decade’s redistricting efforts for over five years.

“It’s not the threat of the lawsuit. It’s the threat of losing the lawsuit because they have lost, and the trajectory is against them. I think Eric Holder deserves a ton of credit for that,” NRDC president Kelly Ward Burton said.” I think that there is real merit to the strategy that he’s been leading and we’ve been running for five years.”

Last week, Ohio’s highest court gave Democrats a huge victory when they struck down a proposed map that would have given Republicans a 13-2 advantage. However, while some in the GOP are fearful, Democrats take no holds barred. Democrats have aggressively gerrymandered maps in New Mexico, Nevada, Oregon, and Illinois.

“If you look at what goes on in Illinois, those guys cut the hearts out of two Republicans,” Rep. Don Bacon (R-NE) said. One national Republican strategist called the Republicans’ lack of effort “embarrassing.”

“It is embarrassing that Republican legislatures are pulling punches in redistricting while Democrats are out for blood. Any Republican who backs a Pelosi-friendly map this cycle should be forced to litigate that vote in a future primary,” the strategist told Politico.

Former Gov. Greitens, who is running for U.S. Senate in Missouri, is leading the charge to get the 7-1 map approved by the state legislature.

Some weak, woke RINOs in Jeff City have betrayed every America First patriot in Missouri and in America.

They are trying to give Democrats extra seats in the US Congress.

Greitens appeared on Steve Bannon’s War Room and called the move to approve the 6-2 map, an example of “RINO corruption and cowardice.”

“You’ve got a group of lobbyist-led RINOs who are betraying the very people who put them into office, and unfortunately, Steve, they’re not just stabbing Missouri patriots in the back. They’re stabbing every America First patriot in the back,” he said.

He highlighted the fact that former President Donald Trump carried the state in a landslide victory, then said, “the map should be seven to one.”