In a letter to top Department of Homeland Security (DHS) officials, exclusively obtained by the Washington Times‘s Stephen Dinan, 19 House Republicans accuse the Biden administration of using its so-called “sanctuary country” orders to protect large portions of the illegal population — specifically those who have overstayed their visas.

The latest visa overstay report published by DHS this week revealed that from October 2019 to September 2020, nearly 685,000 foreign nationals who legally entered the U.S. overstayed their visas, becoming illegal aliens.

“Criminal activity on its own is not enough to make an illegal alien a priority,” the Republicans note of the orders:

Only “current” threats are considered an enforcement priority, and only then generally because of “serious” criminal conduct. Moreover, only those who attempt to unlawfully enter the United States after November 1, 2020 are considered border security priorities: it appears those who overstay visas and who initially entered lawfully are no longer priorities for enforcement at all. [Emphasis added]

As Breitbart News has chronicled over the last year, Biden has imposed broad so-called “sanctuary country” orders that prevent Immigration and Customs Enforcement (ICE) agents from arresting and deporting most of the 11 to 22 million illegal aliens living throughout the United States. 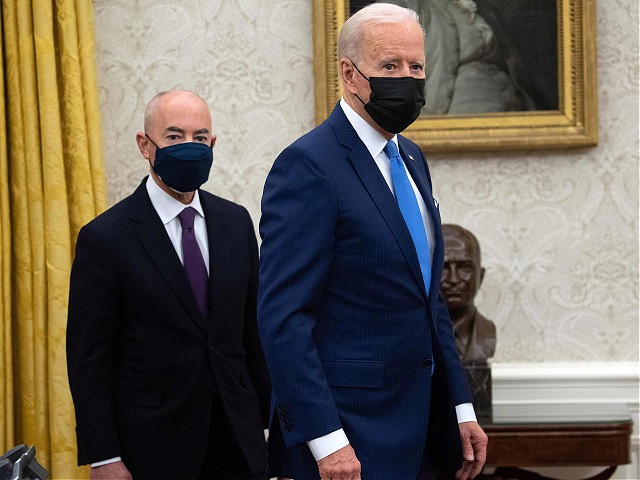 US President Joe Biden stands alongside Secretary of Homeland Security Alejandro Mayorkas after signing executive orders related to immigration in the Oval Office of the White House in Washington, DC, February 2, 2021. (SAUL LOEB/AFP via Getty Images)

When rolling out the orders, DHS Secretary Alejandro Mayorkas said the orders ensure that “the majority” of illegal aliens in the U.S. “are not priorities for removal.”

In their letter, the Republicans note that the orders have resulted in a “dramatic drawdown of interior enforcement” at the same time as a “security crisis along our southern border.”

“During Fiscal Year 2021, there were over 1.7 million encounters along the southwest land border—the highest total ever recorded,” they write. “And this number only represents actual apprehensions. It does not account for the hundreds of thousands of illegal aliens who have evaded detection and made it into the interior of the U.S.”

The Republicans are DHS officials to provide all data related to illegal aliens deported from the U.S. as a result of interior immigration enforcement and a breakdown of all criminal illegal aliens arrested by ICE agents including their crimes and native countries.

As Breitbart News reported, DHS has failed to make public their annual report that details the number of illegal aliens arrested and deported by ICE agents throughout the prior 12 months. Former ICE officials have suggested that the agency is diligently trying to manipulate the data to make it harder to compare to past years of interior enforcement.