A selection of MPs, including former Labour cabinet minister Peter Hain, went on an extraordinary expenses binge in the dying days of the last parliament. Records reveal they treated themselves to iPads and laptop computers, all paid for by the taxpayer.

Spending fever apparently gripped the Commons as members, some of whom were standing down and had no reason to believe they would be using the equipment for government work, and others who suspected they weren’t going to be re-elected, took advantage of generous expenses. The Independent Parliamentary Standards Authority (IPSA) has revealed that members rushed to buy £71,216.48 worth of iPhones, iPads, and laptops to see them through civilian life over the past few months.

IPSA was aware of the abuse and wrote to MPs suggesting they give the equipment to charity, although they have no powers to force former MPs to give up their expensive gadgets, reports the Daily Mail.

One of the MPs retiring from the commons, Labour veteran Peter Hain, worked up an impressive bill of £1,907 in September buying a new computer, new iPad, and new mobile phone. He claimed the purchases were to replace old equipment that had broken, yet now as a retired MP and self-described ‘Labour party campaigner’ he is free to use the government-funded kit for his own purposes. 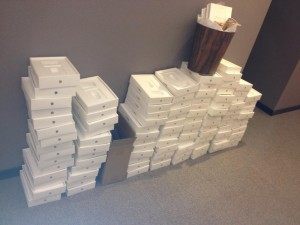 Empty iPad cartons left in the wake of newly expensing-MEPs

iPads are among the most prized gadgets for politicians to charge to the public account around the world. Last year, Breitbart London reported on the extraordinary sight of piles of discarded iPad boxes building up in the corridors of the European Union, as new members and their staff arriving after the 2014 election took to the trough.

The iPads shown in just one photograph amounted to expenses of some £26,000.

These were bought in addition to another order, made for MEPs in 2010, which is beleived to have cost European taxpayers some £400,000.