Defending the Tea Party to its opponents is like explaining Bob Dylan to his critics: their ears don’t hear what your heart understands.

For a year now, Tea Partiers have peaceably assembled and petitioned government for the redress of grievances; and, for a year now, the political class has feared, reviled and defied them. 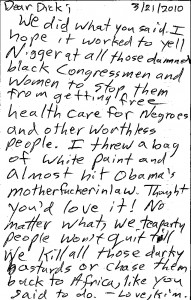 In sum, Washington power-brokers and special interests treat the Tea Party movement as a political bacillus to be quarantined until high priced pollsters, pundits and consultants clad in Gucci lab coats can find a vaccine. In truth, the Tea Party movement is a soulful, spontaneous call for the restoration of citizens’ God-given rights and a revitalization of our representative institutions so that “We the People” can preserve our cherished way of life. Thus, a Tea Party protest is a hymn of American redemption, one which to truly be heard must be felt in one’s heart.

Indeed, amid the folksy din of organic theatrics, at its principled core the Tea Parties constitutes an earnest, spontaneous, decentralized political movement arising from diverse grassroots centers of gravity. Bonded by a shared faith in their freedom and American Exceptionalism, the Tea Party’s eclectic mix of Republicans, Independents, Libertarians and Democrats is deeply concerned about the challenges confronting this great nation we’ve inherited and must bequeath to our children. Consequently, as patriots rather than materialists, Tea Partiers measure their loss of sovereignty by the growth of big government’s insane, unsustainable spending, which edges us further toward fiscal implosion and exacerbates the disorder within our troubled republic.

Unlike the political class whose power, privilege and wealth increases commensurately with the expansion of the state, Tea Partiers know their own liberty, sovereignty, security, prosperity and self-evident truths are eroded by big government. Therefore, Tea Partiers realize the biggest special interest is big government, and it is dismissive and disdainful of their aspirations for responsive democracy and limited government.

Shut out and shunned, to be heard the Tea Partiers have guilelessly taken to the public square and, yes, foppishly adopted the themes and symbols of our nation’s Founding generation (who themselves always considered the American Revolution a restoration of their traditional rights that had been usurped by an arbitrary and capricious king). Of course, the Tea Partiers’ appearance, ingenuousness and patriotism render them ready fodder for elitists’ snooty slurs and worse.

Still, Tea Partiers persevere in their entrepreneurial idealism to engage the government created to ensure – not infringe – their freedom. Braced by their belief in America’s promise, possibilities and, above all, her people, the undaunted Tea Partiers’ continue to utter the politically incorrect heresy that true human progress is not measured by the enlargement of bureaucracy and big government; it is measured in the expansion of liberty and self-government. And, though never pitch perfect, they voice the broader public’s desire to stanch big government’s march to omnipotence, not through a radical revolution, but through the orderly restoration of our God-given rights; the revitalization of our representative institutions; and, thereby, the preservation of our cherished way of life for future generations of free Americans.

So ignore the political class’ cat-calls from the cheap seats and rock on, Tea Partiers. Let the Liberty Bell chime in time with your off-beat songs of freedom. One day, your servant government will hear and heed you; and our free republic will applaud and appreciate your heartfelt hymn of American redemption.