The United States on Thursday called for a meeting of the United Nations Security Council (UNSC) to discuss the tense situation between Russia and Ukraine.

The meeting is to be held on Monday – one day before Russia assumes the rotating presidency of the Security Council.

“More than 100,000 Russian troops are deployed on the Ukrainian border and Russia is engaging in other destabilizing acts aimed at Ukraine, posing a clear threat to international peace and security and the U.N. Charter,” said U.S. Ambassador to the United Nations Linda Thomas-Greenfield.

“As we continue our relentless pursuit of diplomacy to de-escalate tensions in the face of this serious threat to European and global peace and security, the U.N. Security Council is a crucial venue for diplomacy. The members of the Security Council must squarely examine the facts and consider what is at stake for Ukraine, for Russia, for Europe, and for the core obligations and principles of the international order should Russia further invade Ukraine,” she said.

A U.N. diplomat told the Wall Street Journal (WSJ) on Thursday that Russia could conceivably block the request for a UNSC meeting, even before it assumes presidency of the council, but the U.S. probably has enough votes lined up from other UNSC members to make the meeting happen. 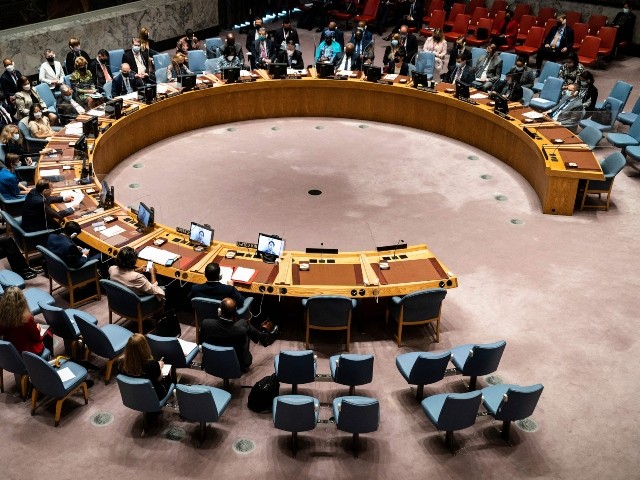 A meeting of the United Nations Security Council at the 76th UN General Assembly on September 23, 2021, in New York. (Photo by JOHN MINCHILLO/POOL/AFP via Getty Images)

The WSJ further noted that Russia could veto any UNSC resolution that harmed its interests, and while a special Security Council meeting could prove embarrassing for Moscow, it could also embarrass the U.S. and NATO if nothing substantial comes out of it. If the meeting goes forward, Russia can be expected to make its case that NATO expansion into eastern Europe threatens its national security interests.

Foreign Policy suggested the Biden administration hopes to take advantage of the dramatic UNSC setting to “highlight Russia’s diplomatic isolation and, if possible, to place a wedge between Russia and its most powerful ally, China, which has been one of the council’s proponents of defending the territorial sovereignty of U.N. member states.”

The Biden team reportedly also has great confidence in Ambassador Thomas-Greenfield’s debating skills against her Russian opposite number, Ambassador Vassily Nebenzia, and hopes for a replay of Adlai Stevenson confronting the Soviets over nuclear missiles in Cuba during the Kennedy administration.

Foreign Policy gingerly noted that might not be something to be hoped for, given how the rest of the Cuban Missile Crisis played out.