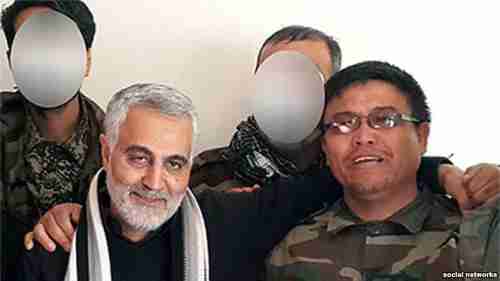 As we have been reporting recently, the regime army of Syria’s president Bashar al-Assad is showing signs of collapse, because of enormous casualty rates and significant increases in draft-dodging and desertions. After a series of significant defeats to an increasingly organized opposition, al-Assad is desperate to reconstitute his army. ( “3-May-15 World View — War in Syria turns more and more against al-Assad”)

There are increasing reports that Iran is recruiting Afghans for al-Assad’s army. The Afghans being recruited are mostly ethnic Hazaras, who are Shias. I have written about the Hazaras a number of times in the past as being victims of horrific terrorist attacks in Pakistan from Taliban-linked groups like Lashkar-e-Jhangvi (LeJ) and Jundullah who are committed to exterminating all Shias in Pakistan, starting with bombings of Shia mosques and schools. People in the Hazara ethnic group live in Iran, as well as in Pakistan and Afghanistan, mostly in poverty, where they usually suffer a great deal of discrimination and violence at the hands of Sunni ethnic groups, especially the Pashtuns.

Hazaras who are illegal immigrants in Iran can be scooped up and forcibly sent to al-Assad’s army in Syria, while others are given money and a chance to stay alive and avoid direct torture.

The irony is that the vestiges of the “Syrian civil war” as a civil war are completely disappearing. It is increasingly a proxy war between foreign fighters — Shia Hezbollah and Shia Afghans on the al-Assad side, and foreign Sunni jihadists from around the world coming to Syria to join the Islamic State (IS or ISIS or ISIL or Daesh) or al-Nusra Front (Jabhat al-Nusra) or one of the “moderate” anti-Assad militias. This is in contrast, for example, to the civil war in the Central African Republic (CAR). If you took all the foreigners (foreign fighters) out of Syria, then the war would collapse. If you took all the foreigners (UN and African Union peacekeepers) out of CAR, then the Muslims and Christians would go full-scale at massacring each other.

When the Syrian civil war first started in 2011, I wrote that Syria was in a generational Awakening era, just one generation past Syria’s last REAL civil war, which climaxed in 1982 with the bloody massacre of some 40,000 Sunni civilians in Hama. So it’s too soon for a new crisis civil war, since too many people remember the last one, so it had to fizzle before long. In 2011, there was no way to predict exactly what scenario it would follow, but now it appears that the scenario is to dissolve into a fight between Shia recruits from Afghanistan and Sunni jihadists from around the world. Al-Monitor and Der Spiegel and Middle East Eye and Business Insider

Debate over the number of European jihadists in Syria

Almost every day, there are new media reports of European jihadists who have gone to Syria to join ISIS or one of the militias fighting against the regime of Syria’s president Bashar al-Assad.

According to the European Union Justice Commissioner Vera Jourová, the number of Europeans who have gone to Syria is about 6,000, principally from France, Germany, Belgium and the Netherlands. This number was higher than previous EU estimates, but there are reasons to believe that, as Jourová herself said, these figures may be “severe underestimates.”

Estimating the number of European jihadists in Syria depends on adding together the official estimates from each of the 28 EU countries. But there are several reasons why a country may severely underestimate the number of its jihadists that have gone to Syria.

The first reason is that there is no motivation for a country to give a truthful figure, since a high estimate of jihadists from that country makes the country look bad.

The second reason is that there is no way to be sure how many have gone. One German official said that a significant discrepancy exists between the official figure and the real one: “Those are people that we can identify by name. Our problem is that there are constantly people turning up in Syria and Iraq that we previously did not know at all… So, the unknown number [Dunkelziffer] is very large.”

The appearance of German-, French- and Dutch-speakers in jihadist propaganda videos has become commonplace and suggests that the official figures are underestimates. On the other hand, a recently-leaked Spanish police report puts the number as high as 100,000. This figure is probably too high, just as the 6,000 estimate is too low. The credible estimates are that tens of thousands of European jihadists have traveled to Syria. GeoPolitical Monitor

The radical left-wing government of prime minister Alexis Tsipras succeeded in making a scheduled 750 million euro debt repayment to the International Monetary Fund (IMF) on Tuesday, but did so only by emptying out an account holding an emergency fund that has to be replenished within weeks.

Greek officials had hoped to obtain the funds for the payment through a law that was passed on April 25 giving the government the right to confiscate cash reserves and bank accounts of all public institutions, including municipalities, provinces, universities and hospitals. Officials had hope to obtain 2.5 billion euros from the decree, but hundreds of mayors across the country refused to comply, fearing that the money would be lost for good.

Tsipras is averring that his government has met all the commitments he made since his party was elected in January, but in fact he is continuing to refuse to cross his “red lines” and institute reforms to address various economic issues, including Greece’s bloated public sector, curbing tax evasion and corruption, privatizing public businesses, and adjusting generous pension and minimum wage policies.

But now leftists are turning on Tsipras, as the perception grows that Tsipras’ tenure has been a disaster for Greece, and possibly for the entire EU. Under the austerity program of his predecessor, Antonis Samaras of the New Democracy party, Greece had been achieving a surplus during the last two years.

But in four months under Tsipras, that hard-won surplus has mostly been blown away. Tax receipts are decreasing, and 4 billion euros have been withdrawn from Greek banks since January, in anticipation of a bank run.

There’s very little sympathy left in Europe for the Tsipras government. Tsipras is begging for more bailout money, but is refusing to cross any of his “red lines.” If the Europeans decide to bail out Greece once more, which would only be “kicking the can down the road” again and postponing the inevitable, it certainly won’t be because they like Tsipras. It will be because they decide that another bailout is the lesser of two horrible evils. They’ve been postponing a decision for weeks, but it’s unlikely that they’ll be able to postpone it much longer. Reuters and Kathimerini and Reuters and Kathimerini