Michael Enright is one of the several hundred Westerners who have traveled to Iraq and Syria to join Kurdish combat units and fight the Islamic State.

He’s an unusual volunteer in several respects: he’s 51 years old, the first time he handled a gun was at a shooting range right before he left for Syria, and he is almost certainly the only YPG fighter who has appeared in movies with Tom Cruise and Johnny Depp. 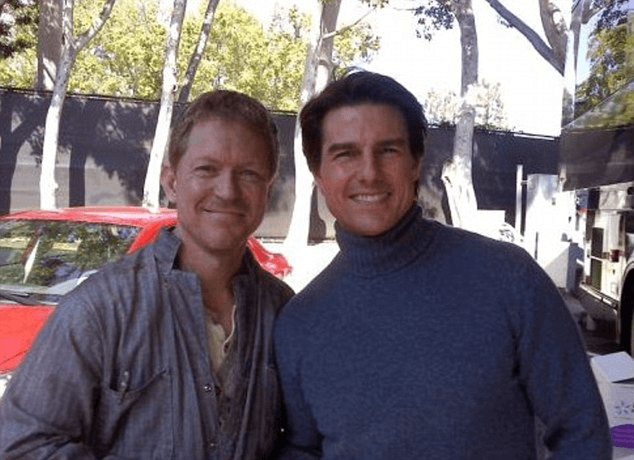 Enright was in good spirits when he talked with the UK Daily Mail over the weekend about his decision to take up arms against ISIS and his experiences in Syria thus far. He does not seem to have received any special treatment from the Kurdish YPG militia due to his pre-war occupation and connections with celebrities, and he does not want any. He is not looking to hold down a desk at some Kurdish media office; he came to fight.

“Where I’m going in the next two days, say a prayer for me, because I’ll be going to a place which has a lot of action, a lot of fighting,” he told the Daily Mail. He has already done a month’s worth of guard duty on the front lines, watching coalition fighter jets attack ISIS forces.

He would like to see a bit more of that, he says. The Daily Mail describes Enright as “angry that Britain is not bombing Islamic State targets in Syria, concentrating instead on Iraq.” He thinks the Kurds could defeat ISIS in Syria with more air cover. “We’re out gunned, and we’re out manned. We need the air support,” he said.

Enright’s story is breathtaking in its simplicity: he beheld the horrors of ISIS and felt it was his duty to his native Britain, the America where he prospered, and the victims of Islamic State atrocities to do something about it. Fortunately, he had a friend in the British SAS who could put him in touch with the Kurdish YPG militia. He made his arrangements quietly, without telling family or friends, because he feared they would try to talk him out of it. He brought everyone in his life up to speed with a Facebook post after he arrived in Syria.

“For me, the biggest regret of my life was not going to Afghanistan when 9/11 happened,” he told the Daily Mail. “The beheading videos brought out the same kind of feelings in me, and a real sense that I had a duty to America. I really feel a debt to the country. You know, they welcomed me with open arms.”

“And then what added to it all was that it was an Englishman, that he had an English accent,” Enright continued, referring to “Jihadi John,” the British-expatriate host of many beheading videos. “And I just, it just touched me personally, in a very deep way.” He said the last straw was ISIS burning captured Jordanian pilot Mu’ath al-Kassasbeh alive in a cage. He watches that video on his smartphone whenever he needs a jolt of motivation for his military duties.

It is not ironic or sarcastic to say that Enright’s journey would make an amazing movie; his story of trying to hook up with YPG contacts in Iraqi Kurdistan is as harrowing as anything you’ll find in an espionage thriller. His training alongside Kurdish fighters, as a gentleman of a certain age without any prior military experience, would make for a fine bit of action-comedy: imagine the Kurdish equivalent of R. Lee Ermey screaming, “You think you’re special because you were in a Pirates of the Caribbean movie, maggot?  Drop and gimme fifty!”

There is no sense whatsoever that he is thinking along those lines. (For the record, Enright describes his training as a combination of weapons drills, language classes, and “running up and down hills, basically.” To his surprise, he turned out to be a naturally gifted rifleman. He sleeps alongside his AK-47, which he has named ‘Olga.'”)

Enright is very serious about what he is doing, well aware of the risks he’s taking, and conscious of all that he left behind, including a sister who was recently diagnosed with cancer. “She’s going through radiotherapy right now,” he said. “And so I’m just hoping that we both get through it.”

To borrow a line from a previous generation of men who answered the call to battle, Enright won’t be coming home until it’s over, over there. He said he’s not homesick after two months in the country. “I’m very happy to be here, to be doing something that I think will outlast me,” he declared.

Enright described ISIS as an “abomination” and said their atrocities were “a call to humanity, it’s a call to everybody, to do whatever we can, in whatever way we can.” He said he wants to “absolutely annihilate them, and kill them on sight.”

Whether or not he winds up documenting his experiences in Hollywood film, he has no intention of appearing in any Islamic State beheading videos. He is well aware of the terror state’s $100,000 bounty for Western hostages and says he keeps a bullet in reserve for himself, in case he’s about to be captured. Here’s hoping you don’t need that one, warrior.