Greece on strike amid plans to cut 25,000 civil service jobs 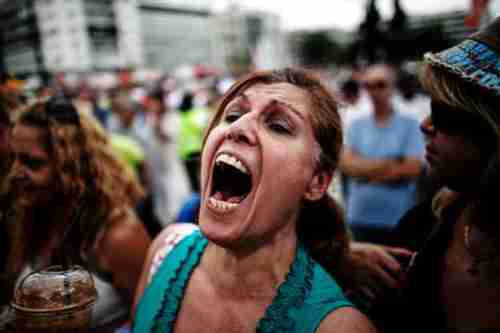 Thousands of private sector employees joined civil service workers ina 24-hour strike across Greece under the slogan, “General Strike – Weare people, not numbers.” Greece is being required to cut thousandsof employees from civil service payrolls, if they’re to continue toreceive bailout payments from Europe and the International MonetaryFund. 12,500 public workers are to be placed in a so-called “mobilitypool” by September this year, giving them eight months to find work inanother department or lose their jobs, despite the fact that the Greekunemployment rate stands at nearly 27 percent, which is double the EUaverage. Greece’s two-party governing coalition faces a stern test onWednesday night, when MPs will vote on more than 100 articlescontained in a multi-bill of reforms that paves the way for sackingsand job transfers in the civil service. Kathimerini (Athens) and Deutsche Welle

According to a survey of 250 industry insiders from financial servicesfirms, 23% reported that they had observed or had first-hand knowledgeof wrongdoing in the workplace, 28% felt the industry does not put theinterests of clients first and 24% admitted they would engage ininsider trading if they could get away with it.

Street were significantly more likely to be aware, accept and engagein illegal or unethical conduct than their more senior colleagues.Among people with less than 10 years experience, 38% said theywould commit insider trading for $10 million if they wouldn’t becaught.

So here you see confirmation of several major issues that I’ve beenwriting about for years.

First, Wall Street, like Washington, has a huge population ofpeople who have no ethical or moral standards whatsoever.

Second, young people — that is, Generation-X, are substantially morelacking in ethics and morals than older people.

Let’s review briefly: Generation-X grew up at a time when feministswere telling mothers to dump their husbands, and then go to court andlie about domestic violence, in order to get as much money aspossible. These children grew up without fathers, except for a streamof men in their mothers’ beds, some of whom would beat or abuse them.They would have loved to have their real fathers in their lives, butthey knew that their mothers were lying, and they saw how theirmothers lied to the divorce court and got away with it. They said tothemselves, “Hey, I can do that too!” And they grew up, went into thefinancial services industry, and created tens of trillions of dollarsin fraudulent subprime mortgage backed securities, and then sold themto older investors, the same men who had been in their mothers’ bedswhen they were children.

Now we have a survey that says that 38% of them are lacking in moralsand ethics, and that’s not the least bit surprising. And, as I keeppointing out, the same people are in the same jobs, still looking fornew ways to defraud people.

The third point is that they would commit these crimes “if theywouldn’t be caught,” and that’s exactly the situation. None of thesecriminals who caused the financial crisis have been prosecuted andsent to jail, and the young people in the survey are well aware ofthis. They know that they can defraud anyone they want, just liketheir mothers did, make a ton of money, laugh at the suckers they’vedefrauded, and get away with it.

And why are they not being investigated and prosecuted by the Obamajustice department? Because they’ve used a fraction of the money theyobtained through fraud, and donated it to Obama as campaigncontributions, and Obama is returning the favor.

According to Jordan Thomas of Labaton Sucharow, which funded thesurvey:

“Many in the financial services industry appear tohave lost their moral compass, and younger professionals pose thegreatest threat to investors. Wall Street needs to take the firststep toward recovery and admit that it has a corporate ethicsproblem, or Main Street should brace itself for morescandals.”

Well, Wall Street is not going to admit anything, and neither are anyWashington politicians. (As an aside, no one has even been firedamong the IRS employees who used taxpayer information to targetpolitical enemies and, for all we know, personal enemies as well.)

Let’s hope that there are more scandals, and it would very nice to seesome of these criminals on Wall Street and in Washington go to jail.Labaton Sucharow and NY Times

A furious Israeli prime minister Benjamin Netanyahu on Tuesday angrilyrejected European Union sanctions imposed because of West Banksettlements. The sanctions will bar any EU funding projects forIsrael in the West Bank. The guidelines require that in all signedagreements with Brussels a clear distinction be made between Israeland the territories it occupied in the 1967 Six-Day war — the GolanHeights, the Gaza Strip and the West Bank including mainly-Arab eastJerusalem. The aspect which has most angered Israel is theterritories within the 1967 borders will be considered eligible for EUfunding.

According to Netanyahu’s statement:

“We shall not accept any external dictates on ourborders. That is an issue that will be decided only in directnegotiations between the sides. …

I would expect those who concern themselves with peace andstability in the region to only debate such an issue afterresolving problems which are slightly more urgent, such as theSyrian civil war or Iran’s race to obtain nuclearweapons.”

However, Israeli settlements in the West Bank, including annexed eastJerusalem, are viewed as illegal under international law. Accordingto Sweden’s foreign minister: “It should not come as a surprise thatthe EU supports international law in Middle East peace efforts.”AFP and Jerusalem Post