(UPI) — A watch gifted to Adolf Hitler on his birthday has sold for $1.1 million, drawing the ire of Jewish leaders against a Maryland auction house that routinely sells controversial memorabilia.

Alexander Historical Auctions sold the Huber watch on Thursday as part of a collection that included a dress belonging to Hitler’s wife, Eva Braun, and other Nazi items looted from the couple’s vacation home in 1945.

The sale went on despite protests from Jewish leaders, including 34 who signed an open letter rebuking profiting off items “belonging to a genocidal murderer and his supporters.”

“The sale of these items is an abhorrence,” wrote Rabbi Menachem Margolin, who chairs the European Jewish Association, in a statement. “There is little to no intrinsic historical value to the vast bulk of the lots on display.” 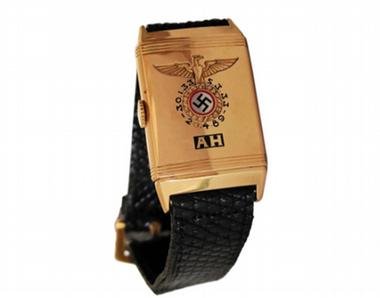 The watch is emblazoned with the initials “A.H.” and was looted from the dictator’s summer home in 1945. Photo Courtesy of Alexander Historical Auctions

The president of the auction house, Bill Panagopulos, declined to share information on the buyer, identifying them only as Jewish European.

“Many people donate [Nazi artifacts] to museums and institutions, as we have done,” he told The Washington Post. “Others need the money, or simply choose to sell. That is not our decision.”

Panagopulos said he has received death threats as a result of his more controversial auctions, including the sale of memorabilia from Nazis and Confederate soldiers.

Despite criticism, officials at Alexander Historical Auctions say their goal is to preserve history.

“If you destroy history, there is no proof that it happened,” Senior Vice President Mindy Greenstein, who is married to Panagopulos, told Deutsche Welle. “Whether good or bad history, it must be preserved.”

Margolin and other Jewish leaders disagreed.

“Whilst it is obvious that the lessons of history need to be learned — and legitimate Nazi artifacts do belong in museums or places of higher learning — the items that you are selling clearly do not,” he said in a statement.