Hundreds of protesters swarmed through the protected “Green Zone” in Baghdad on Wednesday and occupied the Iraqi Parliament building for much of the day.

The protesters were largely followers of Iraq’s influential Shiite cleric Muqtada al-Sadr and were protesting the selection of an Iran-backed nominee for prime minister named Mohammed al-Sudani.

Kurdish news service Rudaw described rowdy Sadrists pulling down the concrete barriers around the Green Zone, chanting anti-Iran slogans, and pushing their way into Parliament after former labor minister Sudani was named as the prime ministerial candidate from the Coordination Framework, an alliance of pro-Iranian Shiite parties.

“The demonstrators, all of them men, were earlier seen walking on tables of the parliament floor, leafing through folders, sitting in the chairs of lawmakers and waving Iraqi flags,” the Associated Press (AP) reported.

The AP observed that parliamentary security forces “appeared to allow the protesters in with relative ease.” Other reports stated the police tried to keep the demonstrators away from the building with tear gas, but they forced their way through.

The current prime minister, Mustafa al-Kadhimi, pleaded with the protesters to “abide by their peace and preserve public and private property, and to the instructions of the security forces responsible with protecting them in accordance with the laws and regulations, and to immediately withdraw from the Green Zone.”

Sadr, who is all in favor of Shiite political influence but much less enthusiastic about Iranian domination, used Twitter to ask his followers to withdraw from the parliament building and “return home” later on Wednesday night. He assured his followers they were successful in delivering their “message” to the Iraqi government.

“Revolution of reform, and rejection of injustice and corruption. Your message has been heard … you have terrorized the corrupt,” Sadr told his faithful, who responded by chanting “We obey the Sayyed” as they dutifully filed out of Parliament. Sayyed is a term of Islamic religious respect for purported descendants of Mohammed.

“I am against Sudani’s candidacy, because he is corrupt,” one of the departing protesters said. 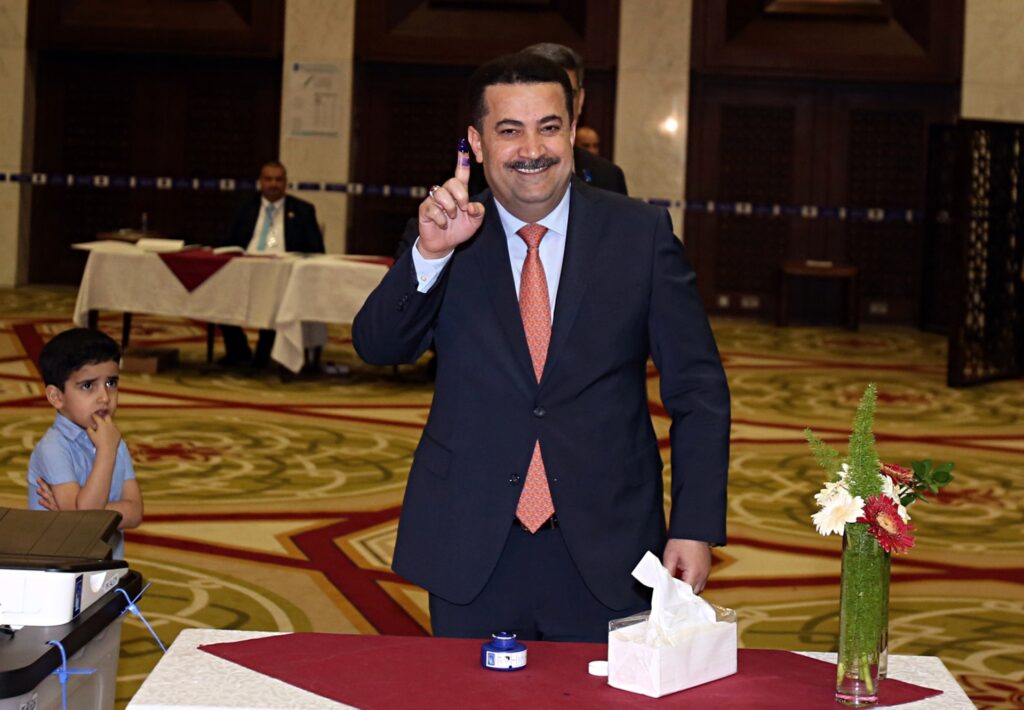 Mohammed al-Sudani, Minister of Labor and Social Affairs shows his ink-stained finger after casting his vote in the country’s parliamentary elections in the heavily fortified Green Zone in Baghdad, Iraq, May 12, 2018. (AP Photo/Karim Kadim, File)

Moqtada al-Sadr triggered a major political crisis in June by renouncing his party’s sweeping victory in October’s parliamentary elections. All 73 of his freshly-elected lawmakers resigned at his command — leaving the pro-Iran bloc with the most seats.

Having trounced his Iran-backed competitors for Shiite power at the ballot box, he tried to force them out of Parliament entirely, and when he could not win that game, he took his ball and went home. Some observers of the Iraqi political scene expect him to build up more political muscle and try a similar strategy again after the next election.

Sadr pumped some political iron two weeks ago by leading a gigantic prayer service in Baghdad, filling the streets with thousands of his supporters despite broiling heat and throwing in some political red meat about the dysfunctional Iraqi system.

Demonstrations of power like this help Sadr convincingly threaten to bring down any government he does not approve of. A few weeks ago, Sadr torpedoed the candidacy of former prime minister Nouri al-Maliki by accusing him of corruption. The candidate Sadrists protested against on Wednesday, Mohammed al-Sudani, is an ally of Maliki dismissed by Sadr’s followers as little more than a puppet or “shadow” of the former PM.

“Al-Sudani just represents a very convenient excuse for Muqtada al-Sadr to voice his displeasure with the entire Coordination Framework and the political system in Iraq. He would have done this if anyone else were nominated,” she said.

Alshamary also thought Sadr is not as anti-Iran as he pretends to be — his interest is primarily in consolidating power and respect for himself and his political-religious organization, rather than squeezing Iran entirely out of Iraq.

“The truth is in Iraq, there is not a single political party, whether Shia, Sunni or Kurd, that does not have some kind of tie with Iran,” she observed.

Wednesday marked the longest post-election deadlock in the Iraqi democracy, thanks to infighting between Kurdish and Shiite groups in addition to Sadr’s theatrics. It has now been 290 days since Iraq had either a head of state or a cabinet.

Iraqis find this state of affairs particularly lamentable in a time of record-breaking oil revenues driven by soaring global prices.