While Biden denied that asking for more Saudi oil — presumably to help lower gasoline prices at home without allowing American oil companies to drill more — was not the objective of the visit, he left unclear exactly why he was in Riyadh last week in his Washington Post article on the matter, titled “Why I’m Going to Saudi Arabia.”

Biden did claim the visit would in some ways help “counter Russia’s aggression” – a goal MBS appears to be undermining by increasing contact with Putin.

The visit has yet to produce any tangible benefits for the United States and served – via an awkward fist bump between Biden and MBS – to normalize diplomatic friendship with Saudi Arabia, something Biden vowed he would not do on the campaign trail in 2020. 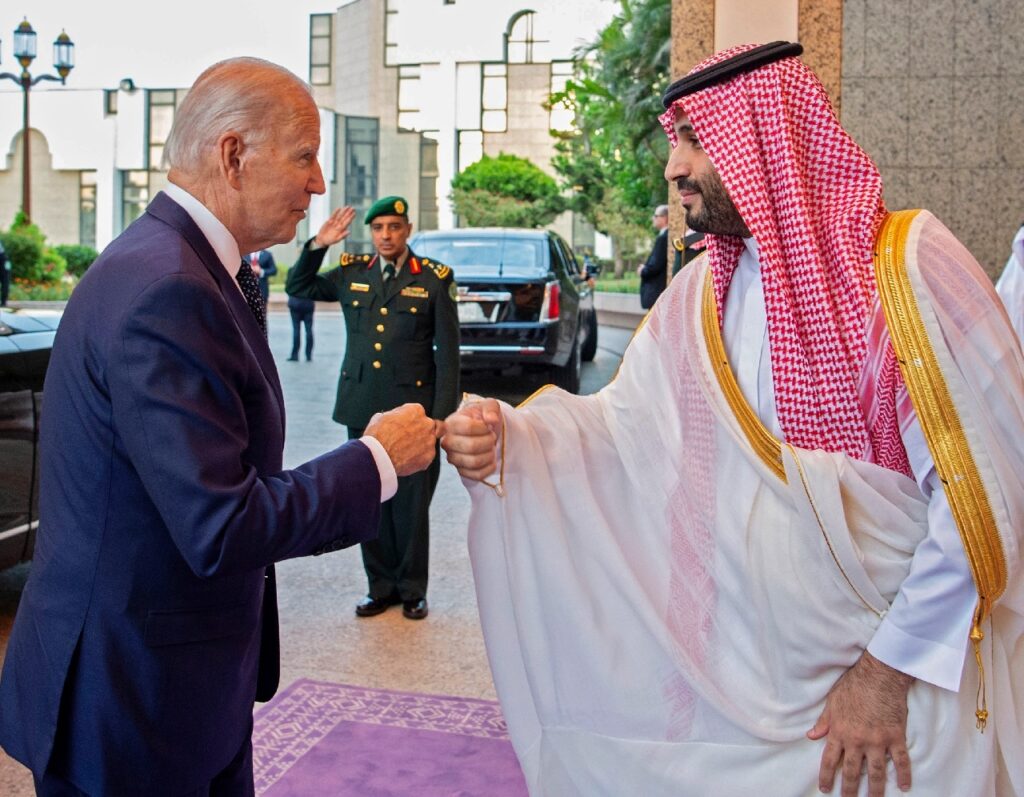 Saudi Arabia is currently enjoying an economic boom largely fueled by high oil prices, disincentivizing the country from enacting policies that would lower them.

Global oil prices are high partially due to European and American attempts to sanction Russia’s fossil fuel industry and limit oil purchases from the country in response to Putin’s decision to escalate the eight-year-old invasion of Ukraine in February, using formal Russian military forces to attack Kyiv and other areas previously exempt from warfare. The drop in demand for Russian oil has dropped prices for it and attracted buyers such as China, India, and Saudi Arabia, who have not supported sanctions and boycotts in response to the situation in Ukraine.

Putin and MBS reportedly discussed maintaining agreements between OPEC+ countries — members of the oil cartel and an affiliated group including Russia — to “maintain stability on the global market,” according to Russian news agency Tass.

“It was noted with satisfaction that countries — participants in this format are consistently fulfilling obligations undertaken for purposes of maintaining the required balance and stability on the global energy resources market” an official Kremlin statement on the call read.

The Kremlin also claimed that the two leaders discussed “the state of affairs in Syria,” where Russia helped dictator Bashar al-Assad all but formally win the civil war that began there in 2011. Assad is a close ally of Iran, as well, Saudi Arabia’s top geopolitical rival and threat.

“The sides also had an exchange of opinions on the state of affairs in Syria with consideration of the July 19 meeting of leaders of the Astana Format guarantor states in Tehran,” according to the Kremlin.

“Both sides positively assessed the achieved level of friendly relations between Russia and Saudi Arabia,” it concluded. “The sides agreed to continue their contacts at various levels.”

Reuters reported last week, citing ship tracking data, that Saudi Arabia appeared to have more than doubled the amount of Russian fuel oil it was importing between April and June, comparing year-on-year to 2021.

“The increased sales of fuel oil, used in power generation, to Saudi Arabia show the challenge that U.S. President Joe Biden faces as his administration seeks to isolate Russia and cut its energy export revenues,” Reuters observed. “While many countries have banned or discouraged purchases from Russia, China, India and several African and Middle Eastern nations have increased imports.”

Saudi Arabia is one of the world’s most prolific oil-rich nations. Importing Russian oil at a much cheaper price than the going rate for Saudi oil allows it to sell more of its product on the world stage, replacing those supplies domestically with Russian products that can sell for less to Saudi citizens.

Reporting on the recent call between MBS and Putin, Reuters claimed that unspecified “sources” believed that Riyadh had “consulted closely with Russia” before supporting any increases in oil production.

Saudi officials, and Gulf officials generally, have been hesitant to increase oil production given the economic success that high prices are bringing to their countries. After meeting with Biden last week, MBS said publicly that Saudi Arabia could afford only a modest increase in output and appeared to blame Biden’s anti-fossil fuel campaign for America’s gas price crisis.

“Adopting unrealistic policies to reduce emissions by excluding main sources of energy will lead in coming years to unprecedented inflation and an increase in energy prices,” bin Salman was quoted as saying, “and rising unemployment and a worsening of serious social and security problems.”

French President Emmanuel Macron had warned Biden at the G7 summit last month that demanding the Gulf states produce more oil was likely a strategy with little chance of success.

“I had a call with MBZ,” Macron could be heard telling Biden on a microphone at the event, referring to United Arab Emirates (UAE) President Mohammed bin Zayed Al Nahyan. “He told me two things. One, I’m at a maximum, maximum [of oil production] what he claims. Second, according to MBZ, the Saudis can increase a little bit, by 150 (thousand gallons) or a little bit more, but they don’t have huge capacities at least before six months’ time.”

Saudi Foreign Affairs Minister Adel al-Jubeir did not appear to commit to any increases in oil production in an interview with CNN last week, following Biden’s meeting with MBS, which al-Jubeir attended.

“Saudi Arabia has increased its oil production over the past year substantially in accordance with the demands of the market, and this is a situation that is continuously being assessed by our Energy Ministry and by experts in this area to determine whether or not more oil is required or less oil is required,” he said vaguely when asked if Riyadh would increase production.

Al-Jubeir attributed high oil prices internationally to “geopolitics and psychology,” presumably referring to the response to the war in Ukraine, and high oil prices in America more to “the lack of refining capacity in the United States than a shortage of actual crude oil.”