President Joe Biden said he will discuss the dormant two-state solution for solving the Israeli-Palestinian conflict during his trip to Israel, the Palestinian territories and Saudi Arabia, calling it the “best way” for peace.

He made his remarks shortly after arriving at the Ben Gurion international airport in Tel Aviv on Wednesday afternoon, where he was greeted by Israeli Prime Minister Yair Lapid and Israeli President Isaac Herzog.

“Greater peace, greater stability, greater connection. It’s critical for all the people in the region which is why we will be discussing my continued support, even though I know it’s not a near term, for a two-state solution,” Biden said.

The two-state solution, which has been trumpeted by successive American administrations — with the notable exception of the last one — has long proved to be an abject failure. 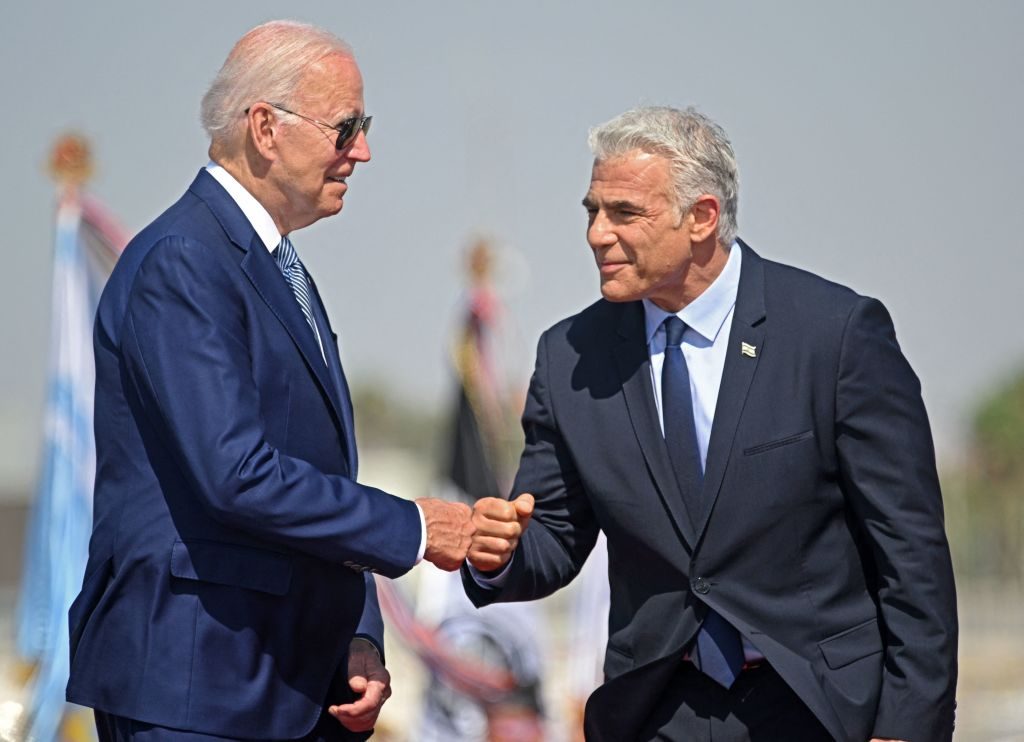 For starters, there is no partner for peace in the Palestinian government in Ramallah with which to broker such a solution. Palestinian Authority President Mahmoud Abbas continues his sinister “pay-for-slay” scheme, paying monthly salaries convicted terrorists and their families, and the Biden administration rewarded him for doing so by resuming Palestinian aid.

But even if reaching a two-state agreement was feasible with the PA, it would never be accepted by Hamas, the terror group ruling the Gaza Strip which has vowed to annihilate Israel and all the Jews “from the river to the sea” and liberate all of “Palestine.”

It’s also worth noting that according to all the most recent polls, Hamas would win over Abbas’ Fatah party if Palestinian elections were held today.

Every Israeli attempt to offer land concessions has been met by terror waves, beginning with attacks under late PLO leader Yasser Arafat in the 1990s following the failed Oslo accords, to the Second Intifada in the early 2000s, to Israel’s withdrawal from Gaza in 2005, that prompted 17 years (and counting) of rocket attacks. 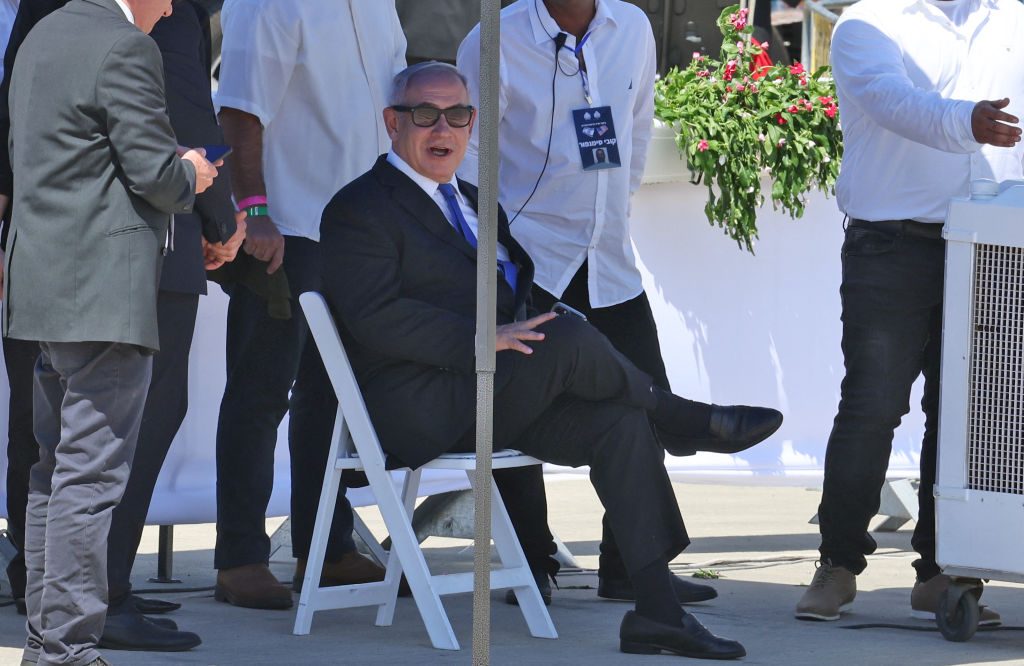 But none of that bothers the president, who said confidently from the tarmac the two-state solution “remains in my view the best way to ensure the future of equal measure of freedom, prosperity, democracy for Israelis and Palestinians alike.”

As Breitbart reporter Charlie Spiering noted, “it was an embarrassing stumble from the president of the United States on Israeli soil.”

Biden, who is on his tenth trip to Israel, told Herzog shortly after landing, “I am home.”

“It’s an honor to once again stand with friends and visit the independent Jewish state of Israel,” Biden opened his speech by saying.

“I’ll say again, you need not be a Jew to be a Zionist,” the American president declared.

Once again, Biden did not waste the opportunity to remind the world he has met every prime minister since Golda Meir in the 1970s. 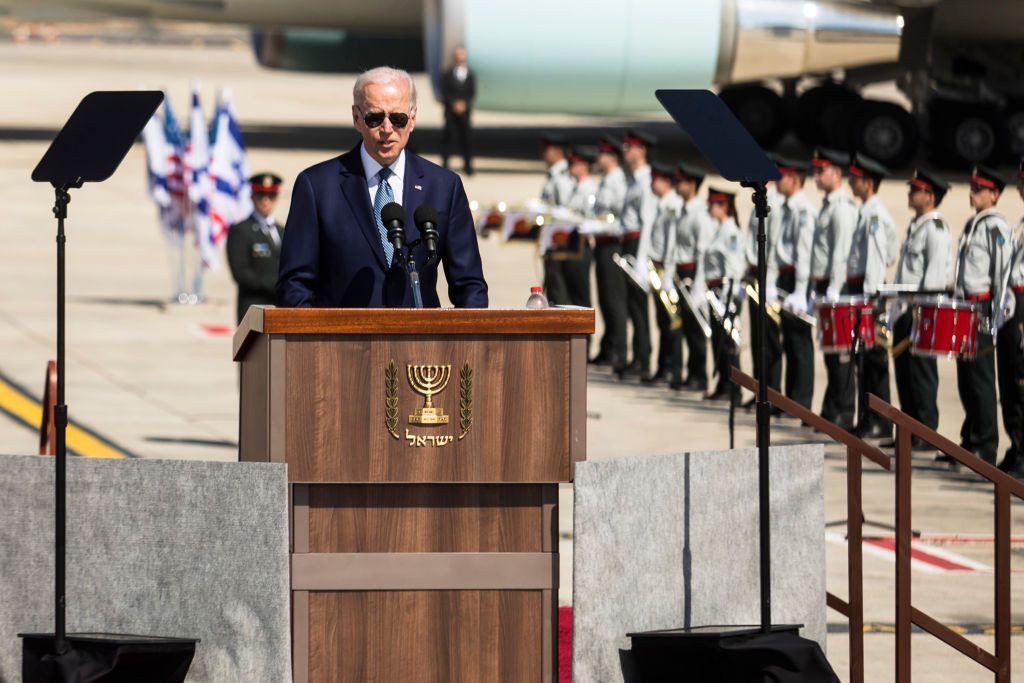 U.S. President Joe Biden speaks during the welcome ceremony during his visit to Israel on July 13, 2022 in Lod, Israel. Biden will spend two days in Israel, his first visit as president, before traveling to Saudi Arabia. (Photo by Amir Levy/Getty Images)

He called the connection between Israelis and Americans “bone-deep.”

For his part, the newly appointed Israeli prime minister Lapid welcomed Biden as “a great Zionist and one of the best friends Israel has ever known.”

He applauded the visit as “historic and deeply personal.”

“It is historic because it expresses the unbreakable bond between our two countries,” Lapid continued. “Our commitment to shared values: democracy, freedom, and the right of the Jewish people to a state of their own.”

While Biden did not mention Iran in his remarks, Lapid said the two intended to discuss “the need to renew a strong global coalition that will stop the Iranian nuclear program.”

“Right now, we are simply happy to see you, Mr. President,” he concluded. “The simple, genuine joy brought by seeing a good friend once again.”