A Los Angeles city councilman has introduced a ballot measure that would dock salaries of city officials if goals to address homelessness included in the measure are not reached.

“We have an emergency situation playing out on our streets, and this ballot measure offers an all-of-the-above approach to addressing it,” said Democrat City Councilman Joe Buscaino, who introduced the measure, per CNS.

The “Safer and Cleaner L.A.” measure would ban homeless encampments while prioritizing the “development of temporary emergency shelters,” CNS reports.

Buscaino, who is also running for mayor, submitted paperwork to the LA city clerk on Friday. The proposal will be reviewed by the clerk and the city attorney, and if approved, he can start the process of gathering 65,000 signatures, which would place the proposed measure on the November ballot. 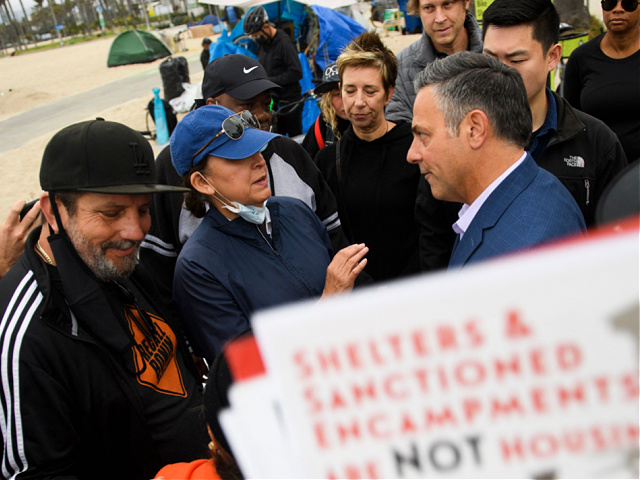 Los Angeles City Council member and mayoral candidate Joe Buscaino Joe Buscaino spoke on June 7, 2021, about his “Plan For A Safer Los Angeles” to address the homelessness crisis in the city, as homeless encampments of unhoused people across the city remain a key issue for the city’s residents. (Photo by PATRICK T. FALLON/AFP via Getty Images)

The measure would give the mayor additional land-use authority during a declared state of emergency related to homelessness, including the ability to waive zoning restrictions, typical procurement procedures and environmental examinations for shelter facilities.

It would also require the incoming mayor to come up with a detailed plan for solving homelessness in the city within three years. The plan, which would have to include the number of beds the city would need to reach “functional zero” homelessness, would have to be approved by the City Council and monitored by an independent auditor.

If the city doesn’t have 50% of the number of beds deemed necessary to meet “functional zero” after 18 months, the mayor, city attorney and City Council members would face financial penalties: Their salaries would be deferred “in an amount equal to the percentage that the goal was not achieved” for the next 18 months. The withheld portion of their salaries would either be paid or forfeited at the end of the third year, depending on whether the goals have been met.

“Built from my experience on the City Council, where my district has few-to-zero encampments as we have tirelessly pursued shelter for residents experiencing homelessness, this ballot measure connects people in need to services and ensures a roof over their heads,” Buscaino said, per CNS.

In November, he proposed a measure before the city council “banning encampments and prioritizing temporary shelter,” but it was rejected in a November 19 vote, which is why he now seeks a petition, according to CNS.

At the time, Councilman Mike Bonin, who Breitbart News reported has faced intense criticism from his constituents in Venice over rampant homelessness, voiced his opposition to Buscaino’s proposal:

In November, Councilman Kevin de León, who is running for mayor and serves as chair of the city council’s Homelessness and Poverty Committee, called a ballot measure the “wrong approach,” CNS reports.

“The fact is that a ballot measure would be extremely costly to taxpayers and would likely result in a continuation of the litigation merry-go-round that’s kept the city from implementing real solutions,” said de León.