Venezuela’s establishment opposition won two major victories in Barinas state, home of Hugo Chávez, in the past two months – only for the victor to immediately pledge allegiance to dictator Nicolás Maduro.

The initial election for governor of Barinas occurred last month. The establishment opposition candidate won against a member of the Chávez family, a defeat so embarrassing Maduro announced the socialists would simply scrap the election results and try again. They lost by an even wider margin, this time with Chávez son-in-law Jorge Arreaza on the ballot, a month later.

While a back to back defeat of that nature can be interpreted as a new rallying point for the Venezuelan opposition against the authoritarian regime, their “victory” might very well end up being beneficial to the regime in the end.

The state of Barinas holds a deep ideological significance to the socialist regime, more so than the country’s Capital District itself, as Barinas was the birthplace of Hugo Chávez, who is posthumously referred to by the socialist party as the “Supreme and Eternal Commander of the Revolution.” The media, both national and international, often refer to Barinas as the “cradle” of Hugo Chávez and the Chavista movement.

Ever since the Fifth Republic Movement (the United Socialist Party of Venezuela’s progenitor) rose to power in 1998 and through January 2022, the state has been ruled by a member of Hugo Chávez’s family, such as his father, Hugo de los Reyes Chávez, or by his brothers, Adan and Argenis Chávez, the latter of which was the one that was defeated in the December 2021 elections.

So, from an ideological standpoint, it is a bastion that the Bolivarian Revolution could not afford to lose — a fact that the media has made note of. The regime went as far as to hand out appliances and construction materials to boost Arreaza’s campaign.

The victory of opposition candidate Sergio Garrido over the Chávez dynasty was a tremendous coup for a political coalition that has suffered years of failures – until Garrido recognized Maduro’s presidency as legitimate, betraying the true (but useless) president of the country, Juan Guaidó. Garrido met with Maduro mere days after his victory.

The ‘opposition’ candidate, Sergio Garrido, that won the vote for governor of Barinas over Jorge Arreaza is meeting with Nicolas Maduro at miraflores. #Venezuela pic.twitter.com/gq0xhOYsXS

“It is a reality that Maduro is there, and he is the president,” Garrido stated in a local interview.

Garrido’s victory has created the context required to start pushing a new tactic against Maduro that’s enshrined in our constitution: a recall referendum. On January 17th, Venezuela’s Electoral council approved three different requests to initiate the recall vote process. According to Venezuelan law, the process requires the signatures of at least 20 percent of the country’s electorate to be initiated.

Removing Maduro from power via a recall referendum was the approach that the opposition attempted to achieve in 2016 right after their victory in the December 2015 legislative elections, but the regime swiftly and without shame sabotaged the entire process and nullified the collected signatures back then, alleging voter fraud.

A key difference this time is the fact that Maduro has not been legitimately occupying the presidency after the sham elections that took place in 2018. Should the opposition forgo the disastrous events of the 2016 recall referendum efforts and once again participate in calling for a recall referendum, it could be interpreted as a tacit recognition of Maduro’s presidency, as you cannot recall an illegitimate president in the first place. 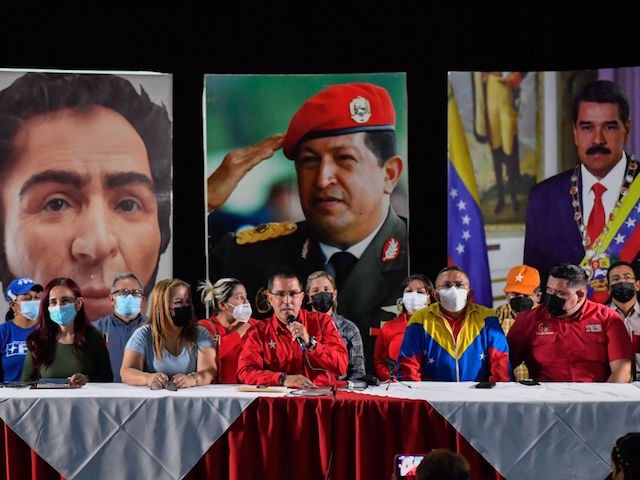 Jorge Arreaza (C), the candidate of the ruling United Socialist Party of Venezuela (PSUV) for the governorship of Barinas State who was defeated in Sunday’s re-run gubernatorial election, speaks during a press conference in Barinas, Venezuela, on January 10, 2022. (FEDERICO PARRA/AFP via Getty Images)

If the hypothetical scenario of a successful recall referendum materializes in 2022, Maduro would stop being the president and new elections would take place within the next 30 days. The current vice-president, Delcy Rodríguez, would assume the presidency during that time.

Even if such a thing were to occur and Maduro is replaced by an opposition candidate, the entirety of the Venezuela’s power would still be at the hands of the United Socialist Party (PSUV), including the National Assembly, the Supreme Court, the vast majority of the gubernatorial and mayoral offices, and all ministries and public offices — and that’s without factoring the military and paramilitary forces under its command, such as the infamous colectivos.

“Sacrificing” Barinas’s governor seat for a four-year term allows the socialists to reinvigorate the democratic facade that they present to the world — how can they be an authoritarian regime if they cheer losing such an ideologically important state? Losing it to an “opposition” leader willing to shake hands with Maduro makes it not very much of a loss at all.

Maduro, who has been president for nearly nine years now, has recently stated that he will remain in power until 2030 and has announced a new “transition to socialism” even though the Bolivarian Revolution and it’s Socialism of the 21st century has been doing so for the past two decades now. While the regime promises more socialism in the future, they’ve been focused on masking the numerous calamities that socialism has already unleashed upon Venezuela through managed doses of capitalism.

Christian K. Caruzo is a Venezuelan writer and documents life under socialism. You can follow him on Twitter here.