The newly elected “opposition” governor of Barinas state, Venezuela, met with dictator Nicolás Maduro on Thursday to express his support for the socialist, deflating hopes that his victory represented a win for those who oppose the far-left authoritarian regime.

Sergio Garrido won a second election in Barinas – the home state of late dictator Hugo Chávez – against Chávez’s son-in-law and former Foreign Minister Jorge Arreaza this weekend. The Maduro regime forced a second election after disqualifying a different opposition candidate, Freddy Superlano, who won the first round of votes against Arreaza. Superlano is a member of the Popular Will opposition party; Garrido is a member of Democratic Action. Both parties are full members of the Socialist International.

Garrido’s meeting with Maduro lent legitimacy to both the election process under the socialist dictatorship, which the vast majority of Venezuelans consider fraudulent, and to Maduro himself, who has not legally been president of Venezuela since at least 2018.

Garrido explicitly stated that he accepted that Maduro was the president of Venezuela, rejecting the person who constitutionally holds that title, Juan Guaidó. 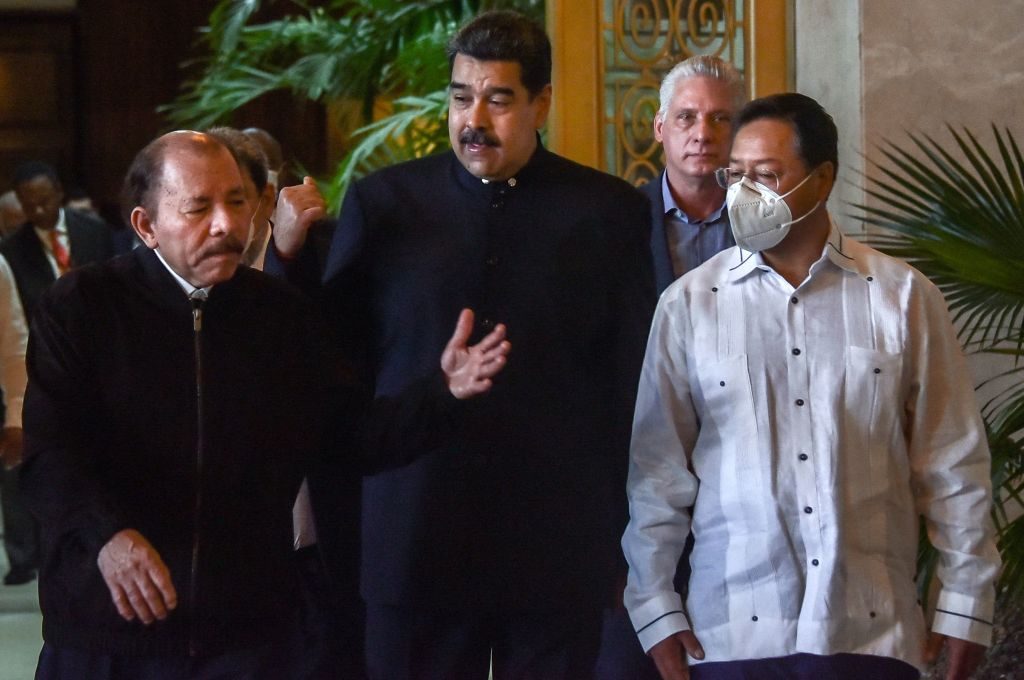 (L-R) Nicaraguan President Daniel Ortega, Venezuelan President Nicolas Maduro, Cuban President Miguel Diaz-Canel (back) and Bolivian President Luis Arce are seen during the XX Summit of the Bolivarian Alliance for the Peoples of Our America-People’s Trade Agreement (ALBA-TCP), at the Palace of the Revolution in Havana on December 14, 2021 ADALBERTO ROQUE/POOL/AFP via Getty Images).

Guaidó is a former lawmaker and member of the Popular Will party whom the National Assembly, the federal legislature, swore in as president in 2019, following the end of Maduro’s last legal term in power. Guaidó has largely failed to exercise any presidential powers, as the armed forces refuse to stop following Maduro and Maduro never left the presidential palace, Miraflores. After two years in power, formerly supportive members of the opposition have begun calling for a new interim president.

Garrido did not do so, simply affirming his claim that Maduro is the true president of the country.

“I cannot fail to recognize Nicolás Maduro,” Garrido said, according to Maduro propaganda network VTV. “It is a reality, he is there, he is the president. Whether we want it or not, thats’ the reality.”

Garrido announced after his victory that he would not seek any significant dissent from the socialist regime, despite running as an “opposition” candidate.

“I want to tell the people of Venezuela and my Barinas countrymen that we are turning the page here,” Garrido said. “We are all in need here in these times. Every good man and woman who wants to contribute, help bring progress to our state, welcome.”

Maduro welcomed Garrido to his palace in Caracas on Thursday.

“I reiterated my will and commitment to work together, in favor of seeking solutions to the problems of the Barinas people,” Maduro wrote in a message on Twitter marking the encounter. “Venezuela needs us united!”

On state television later that night, Maduro called Garrido’s victory over his own foreign minister “a total success for democracy” and celebrated that the administration of President Joe Biden bizarrely congratulated Garrido on his win.

“We congratulate all Venezuelans who stood for democracy in yesterday’s election in Barinas,” Brian Nichols, Biden’s Western Hemisphere point person, said in a statement Monday. “Disqualifications of opposition candidates, media censorship, voter intimidation, & other authoritarian tactics could not subvert the will of Venezuelan voters.”

“How good that the government of the United States has congratulated Governor Sergio Garrido, because by congratulating him, they congratulate the CNE [National Electoral Commission], the Republic Plan, all the governors, the mayors, and myself,” Maduro declared. The dictator vowed “all my political support” to the alleged “opposition” governor.

Maduro and Biden engaged in a friendly encounter in 2015 at the inauguration of then-Brazilian President Dilma Rousseff, a leftist who was impeached and removed from office in disgrace.

Garrido’s support for Maduro is yet another blow to an increasingly discredited alleged “opposition,” led by socialists who have indicated no meaningful ideological differences with the current regime. Guaidó was one of the few voices in the opposition to reject Maduro’s invite to participate in elections last year, albeit tepidly and in statements that opposition elites vastly ignored. 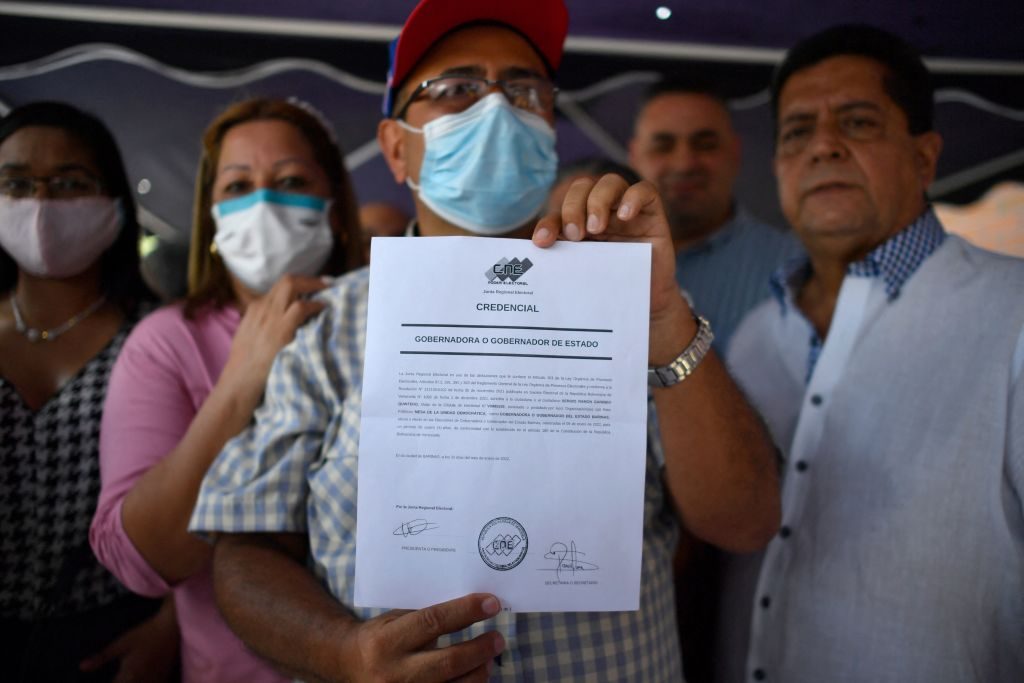 Barinas State elected governor, Sergio Garrido, who defeated the ruling party’s candidate in Sunday’s re-run of the gubernatorial election of the state of Barinas, displays the document certifying him as governor during his accreditation and proclamation by the Barinas State Electoral Regional Office on behalf of the National Electoral Council (CNE), at the CNE headquarters in Barinas, Venezuela, on January 10, 2022 (FEDERICO PARRA/AFP via Getty).

Socialist leaders such as Henry Ramos Allup – a vice president of the Socialist International and leader of the Democratic Action party that Garrido belongs to – and Henrique Capriles Radonski, who lost two rigged elections to Maduro, called for legitimizing Maduro’s elections with a weak opposition presence, disregarding Guaidó entirely. Guaidó proved not to be a factor in the rigged 2021 elections at all.

Amid extremely low turnout and widespread reports of violence and voter intimidation, the ruling United Socialist Party of Venezuela (PSUV) won every state election except for Barinas.

Prior to the election, one of Guaidó’s closest allies, his foreign minister, Julio Borges, resigned from his position and called on Guaidó to step down.

“The interim government has deformed and become a sort of caste and an end in itself, where a space has been bureaucratized that is not fulfilling its reason to be. It needs to disappear completely,” Borges declared.