Florida governor Ron DeSantis (R) is facing growing resistance as he tries to discover the scale and impact of migrant smuggling in his state.

“States may have only limited power to make the administration control immigration, but the governor is using the [legal] power he does have to force a change,” Andrew R. Arthur of the Center for Immigration Studies (CIS) wrote in an article published Wednesday.

On June 17, Florida Governor Ron DeSantis (R) used his power under state law to ask the state’s Supreme Court for an order empaneling a statewide grand jury in its 10th Judicial Circuit to examine various immigration-related “crimes and wrongs” residents and local officials there may have engaged in.

The targets, said Arthur, “are family members who paid smugglers to bring unaccompanied alien children (UACs) unlawfully into the United States, and the government of Miami-Dade County — which allegedly is refusing to honor DHS detainers for some serious criminal aliens. ”

He also noted that in 2012, the Supreme Court held states lacked the power to enforce immigration laws, making them dependent on the administration to ensure the laws were followed. 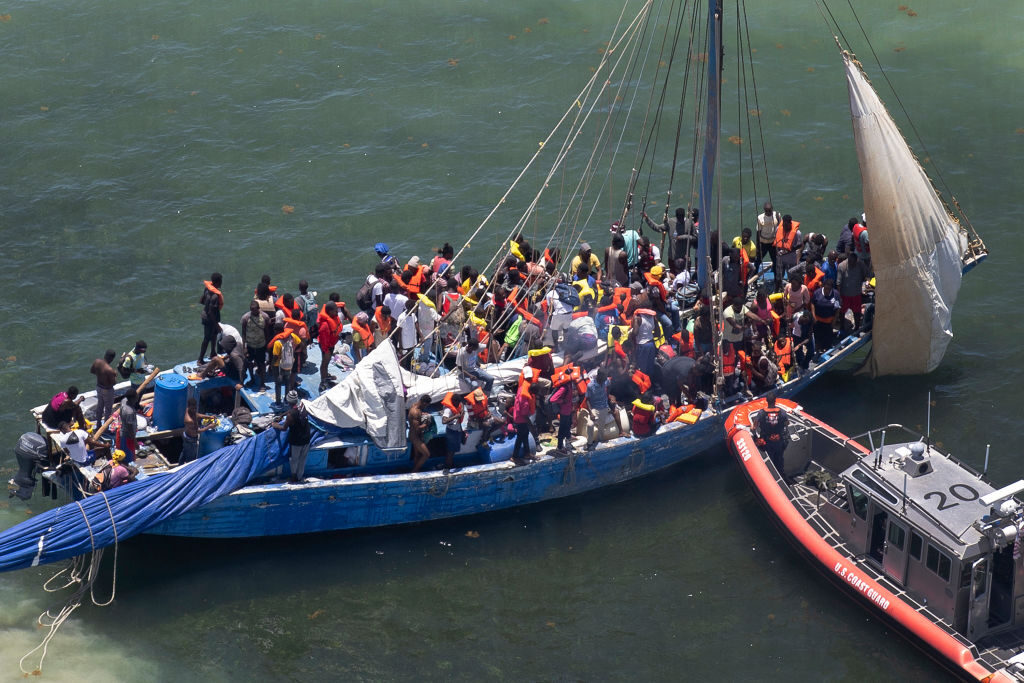 A U.S. Coast Guard alongside a sailboat containing approximately 150 migrants on July 21, 2022 in Islandia, Florida. U.S. Coast Guard, Miami-Dade police and other law enforcement agencies are processing the migrants after they were intercepted near Boca Chita Key. (Joe Raedle/Getty Images)

But the current administration has refused to do its duty in that area.

“The states have, however, used the power that they do have to force the Biden administration in federal court to follow the laws that Congress has written, with mixed results. There are limitations on even the Supreme Court, though, to ensure that the laws are faithfully executed,” Arthur continued.

“While Washington does nothing to stop the flow of illegal immigration into our states, Florida has passed concrete laws to defend our state against the consequences of Biden’s dereliction of duty,” he continued:

Biden’s Border Crisis constitutes a catastrophic failure of leadership. While Washington does nothing to stop the flow of illegal immigration into our states, Florida has passed concrete laws to defend our state against the consequences of Biden’s dereliction of duty. pic.twitter.com/g9FxiLCIp6

Meanwhile, Biden was on pace to bring approximately 2.1 million illegal aliens to the United States-Mexico border by the close of this year, Breitbart News reported Monday.

“Steve Kopits with the Princeton Policy Advisors projects that in fiscal year 2022, Biden will entice about 2.1 million illegal aliens to the southern border — an annual record for illegal immigration that surpasses Biden’s record-setting levels for 2021,” the outlet said.

In conclusion, Arthur said DeSantis was committed to ensuring laws were enforced, the Constitution followed, and justice served.

“By obtaining a grand jury to investigate immigration-related violations of state law, DeSantis is breaking ground that other disgruntled chief magistrates can plow in their efforts to slow and, with luck, stop the degradation of immigration enforcement in the United States. The Biden administration should not bet against him,” he wrote.