ROME — The Vatican finally sought to rein in the unruly German Catholic “Synodal Way” Thursday, declaring it has no authority to embrace “new approaches to doctrine and morals” contrary to those of the universal Church.

In an unsigned “Declaration of the Holy See,” the Vatican Press Office clarified that it would not be licit “to initiate in the dioceses, before an agreement at the level of the universal Church, official new structures or doctrines, which would represent a wound to ecclesial communion and a threat to the unity of the Church.”

For many months the German Catholic Church has been using Pope Francis’ emphasis on “synodality” to push for a rethinking of Catholic teaching on marriage, human sexuality, and the priesthood. 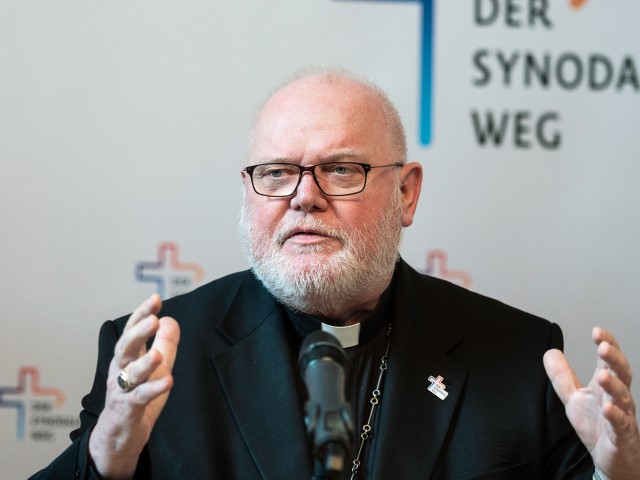 30 January 2020, Hessen, Frankfurt: Cardinal Reinhard Marx, Chairman of the German Bishops’ Conference, speaks at a press conference. The first meeting of the Synodal Way of the Catholic Church will, from today on, deal with reform proposals on celibacy and the position of women in the Church. (Andreas Arnold/picture alliance via Getty Images)

Among the proposals of the German Synodal Way are the endorsement of women priests, married priests, blessing of homosexual couples, and a redrafting of the Catechism of the Catholic Church on human sexuality.

The synodal way has embraced, for instance, “blessing ceremonies for couples who love each other” and proposes that Germany’s bishops “officially allow blessing ceremonies in their dioceses for couples who love each other and want to commit themselves, but to whom sacramental marriage is not accessible or who do not want to enter into it.” It stresses that “this also applies to same-sex couples on the basis of a re-evaluation of homosexuality as a normal variant of human sexuality.”

Thursday’s Vatican declaration seeks to curb such excesses and states that the synodal way in Germany “has no faculty to oblige bishops and faithful to assume new ways of governing and new approaches to doctrine and morals,” a clarification made “in order to protect the freedom of the people of God and the exercise of the episcopal ministry.”

Local churches “live and flourish in and from the universal Church, and if they find themselves separated from the entire ecclesial body, they become weakened, rot, and die. Hence the need to keep communion with the whole body of the Church always alive and effective,” the text states, citing an earlier letter by Pope Francis.

It is hoped, the declaration concludes, that the proposals of the way of the particular Churches in Germany “will flow into the synodal path that the universal Church is following, for a mutual enrichment and a witness to that unity with which the body of the Church manifests its fidelity to Christ the Lord.”

Critics of Pope Francis have suggested that the pontiff’s repeated downplaying of the importance of doctrine, discipline, and morals, as well as his invitations for Catholics to “make a mess,” have opened the door for renegade groups to pursue paths that seem destined to end in schism from the Catholic Church.

Moreover, last April, more than 70 bishops from around the world issued a “fraternal open letter” to Germany’s bishops warning that the radical changes to Church teaching advocated by the “Synodal Path” could lead to schism.

“Failing to listen to the Holy Spirit and the Gospel, the Synodal Path’s actions undermine the credibility of Church authority, including that of Pope Francis; Christian anthropology and sexual morality; and the reliability of Scripture,” the letter declared.

“While they display a patina of religious ideas and vocabulary, the German Synodal Path documents seem largely inspired not by Scripture and Tradition — which, for the Second Vatican Council, are ‘a single sacred deposit of the Word of God’ — but by sociological analysis and contemporary political, including gender, ideologies,” the letter said.