The Ukrainian Catholic Bishop for Britain said this week that Vladimir Putin’s interest in Ukraine stems from his desire to bring back the Soviet Union.

“Why is Mr. Putin so interested in Ukraine? Well, he has said that the greatest tragedy of this past century is the collapse of the Soviet Union,” Bishop Kenneth Nowakowski told the website of the Catholic Bishops’ Conference of England and Wales.

Bishop Nowakowski observed that many may find Putin’s assertion odd, since when considering the greatest tragedies of the past century we may point to the First and Second World Wars, the Holocaust, Stalin’s Holodomor starvation genocide in Ukraine, or even the Chernobyl nuclear disaster in 1986.

“So if we have a person in charge of the Russian Federation who feels that the greatest tragedy in the past century was the collapse of the Soviet Union, it’s no wonder that he is interested – at all costs – in reforming such an organization,” Nowakowski stated.

“This is causing great concern, but this isn’t something new,” he declared. “In 2014, a war was started by Russia with Ukraine, the annexation of Crimea, which is territorially Ukrainian, and also Eastern Ukraine. Thousands, more than 14,000 Ukrainian people have died in this war since 2014 and more than a million people have become internally displaced.”

“It is a humanitarian disaster like we have never seen before in Europe since the Second World War,” the prelate stated.

“Let’s be frank, war kills,” he said. “People are dying. People are being maimed. Households are being destroyed. Families are being torn apart. This is a tragedy that is unfolding before our very eyes.”

In response to the military threat, Bishop Nowakowski counseled prayer and action.

“We can pray,” he said, citing Pope Francis that “prayer for peace is stronger than any weapon.” 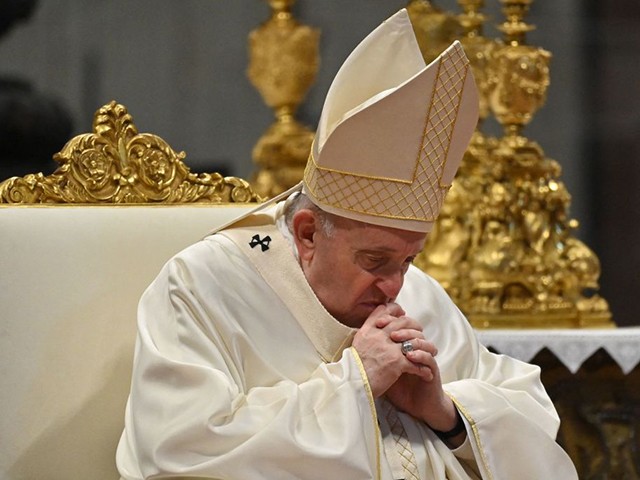 Pope Francis prays during an ordination mass on April 25, 2021, at St. Peter’s Basilica in The Vatican (ALBERTO PIZZOLI/AFP via Getty Images).

For its part, the international community “can continue to apply pressure on Russia to stop the threat of invasion – not only to Ukraine, but to other countries,” he said.

“We can stand up for truth,” the bishop declared. “We all have heard this term ‘fake news’ so many times over the past several years, but we can find the truth and stand for the truth.”