In scenes akin to those traditionally associated with authoritarian regimes, police in Britain were filmed arresting a military veteran for posting a meme critical of woke gender ideology on Facebook.

“Is this the Gestapo? What has gone wrong in our country?” the veteran questioned as he was being placed in handcuffs by three officers in broad daylight outside of his suburban home.

The incident was captured live on video on Thursday by Reclaim Party leader Laurence Fox, who chastised the Hampshire Constabulary officers for acting as an “anti-British politicised police force.”

The veteran, at the time left unidentified for privacy purposes, was apparently arrested for reposting a satirical meme from Fox of four Progress Pride flags together to form a swastika. 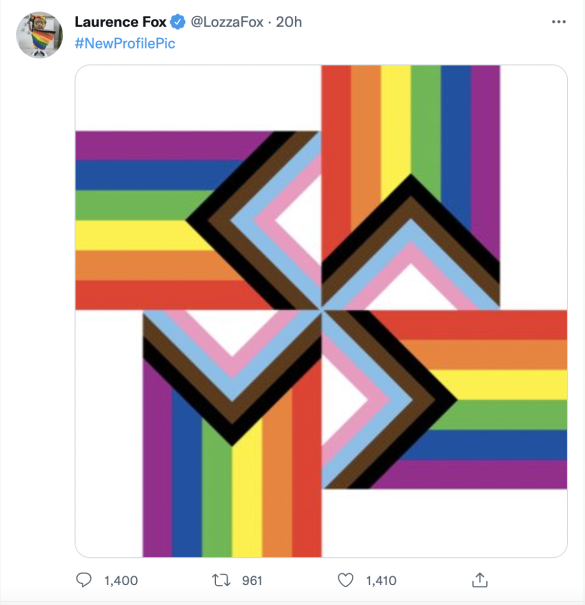 The meme, which resulted in a Twitter suspension and calls for police investigations against the actor turned anti-woke campaigner last month, was described by Fox as a commentary on how Pride Month is “enforced with a sense of hectoring authoritarianism”.

Despite the veteran saying that he had reposted the meme from Fox, the police chose not to arrest the Reclaim Party leader for the same post.

In the footage, one officer was heard justifying the arrest by saying that “somebody has taken offence” to the “homophobic” post shared on Facebook.

The arrest comes less than a week after the College of Policing issued national guidance telling officers to focus on actual crimes rather than intervening in “debates on Twitter”.

In exclusive comments provided to Breitbart London, Laurence Fox said that the arrest demonstrated that the update in policing guidelines was a change without a difference: “It’s the difference between sausage and mash and toad in the hole, nothing has changed.”

“This shows that we aren’t really living in a democracy, the thin veil hiding the reality that we live in China has fallen,” he said, commenting that the British police have turned into nothing more than “the Gestapo, the Stasi, or the Cheka”.

The Reclaim Party leader said that he had no faith in the Conservative Party government to protect free speech, saying that they merely represent the “woke uniparty” and that prime ministerial candidates like Rishi Sunak are just figureheads “for the elite who are actually in charge”.

Fox said that although woke ideology has already spread throughout America, “at least they have the Second Amendment,” adding that “guns are a pretty good deterrent to knocking on a door because someone was offended.”

He concluded by saying that the Bad Law Project, which Fox established to dismantle political ideology disguised as law, will be “coming after every institution” in Britain to confront the spread of wokery.

On Friday afternoon, Mr Fox revealed on social media that the case against the veteran had been “dropped entirely” and that he will not face any charges.

Minutes prior to the arrest of the veteran, the same police force also arrested former officer Harry Miller, who previously won a legal battle against the recording of “non-crime hate incidents” at the High Court over him supposedly posting “transphobic” posts online.

Over the past five years, police have recorded over 120,000 such “non-crimes” — which are visible on criminal background checks.

In December, the court ruled that police had acted “unlawfully” by logging his posts in a police database despite there being no evidence of an actual crime.

Explaining his arrest on Thursday, Miller said that he was “arrested for obstructing a police officer” as they were trying to arrest the veteran for the Fox meme.

“My defence is that there is NO offence of obstructing a police officer who is engaged in unlawful duty,” Miller told Breitbart London. “In seeking to arrest a member of the public for posting a meme, the attempted arrest was entirely unlawful.”

“The police didn’t even know what law had been broken but acted purely on the basis that the flag had offended someone,” the FairCop campaigner added.

“I don’t want an apology. I want the Chief Constable’s head in my fridge. We do not live in an Orwellian society. We do not have a Stasi, a Cheka or a Gestapo.”

Well, I had no idea at all just how much work there is to do. Those officers were out-of-their-minds, robots, unthinking automatons. They behaved illegally at every point; misrepresenting the law, not only ignoring PACE but saying it didn’t count.

On social media, Miller noted that one of the officers who arrested him was wearing a “rainbow badge that said Hampshire Police on it,” adding that he told her that he refused to recognise her “authority to arrest a man over a flag when she herself was wearing one.”

Hampshire Constabulary has previously boasted of being one of the first forces in the nation to establish an “LGBT+ liaison scheme,” with this year marking the 25th anniversary of its inception.

The force currently has around 90 “LGBT+ Link Officers,” who are not only tasked with representing the constabulary at Pride events but also to “encourage the reporting of homophobic, biphobic, and transphobic hate crimes along with domestic abuse and sexual violence.”

Such hate crimes include “physical attacks, threats, or verbal and online abuse”.

Free Speech Win? UK Police Told That Being Offensive Is Not a Crime https://t.co/anzE6CAzxb

In comments provided to Breitbart London, Hampshire Constabulary said: “Officers were making enquiries following a report that an offensive image had been shared online. They were investigating an alleged offence under Section 127 of the Communications Act (2003). As such, they attended an address in Aldershot in order to establish the exact circumstances around the social media post.”

“Following discussions, officers agreed to return to the address on July 28. When officers arrived they were prevented from entering the address to discuss a potential resolution to the matter. As a result, officers felt it was necessary to arrest a man at the scene so they could interview him in relation to the alleged offence.”

The force said that the 51-year-old man from Aldershot was “arrested on suspicion of sending by public communication network an offensive, indecent, obscene, menacing message or matter,” however he has since been released under investigation and has been “NFAd” (No Further Action).

The constabulary wanted to stress that its “officers come to work every day to protect the public” and that they were “acting in good faith” while investigating a supposedly offensive image posted online.

“Policing reports in relation to online content is a complex and challenging picture. We are engaging further with our Police and Crime Commissioner to make sure that we deploy our resource in a way that reflects need in our local communities.”

“A 57-year-old man from Market Rasen, Lincs, was arrested on suspicion of obstructing/resisting a constable in execution of duty. He was released under investigation, and our enquiries are ongoing. Due to this being a live investigation we cannot comment further.”

Police Force Admits it Was Wrong to Warn Feminist for Being ‘Untoward About Paedophiles’https://t.co/NA2LNsyvn0