Ukraine and Belarus held observance ceremonies in their capitals Friday to honor the casualties of the 1986 Chernobyl nuclear disaster, which occurred 33 years ago and has left an uninhabitable nuclear wasteland in its wake.

The Chernobyl Nuclear Power Plant stands near the abandoned former Soviet town of Pripyat, built to house power plant workers in Ukraine near the Belarussian border. On April 26, 1986, one of the reactors at the plant began to overheat. In response, Soviet authorities urged power plant workers to increase power levels, causing a powerful nuclear blast. Eyewitnesses say the Soviet government deployed confused soldiers to the site, who had no nuclear expertise, and took three days to tell Pripyat residents to evacuate.

Moscow was also notoriously secretive to the outside world about the disaster, prompting Western media to assume that thousands had died instantly.

“A lot of people still think that tens of thousands of people died almost immediately as a result of this accident. That’s not the case. And but part of the reason for that is Western correspondents in Moscow weren’t allowed access to any information,” Adam Higginbotham, author of Midnight in Chernobyl, said in an interview this week. “So they did their best with rumors and hearsay.”

In reality, two people were killed by the immediate blast and another 29 died of radiation poisoning after being exposed to the meltdown in the plant. Yet the pervasiveness of the poisoning is believed to have caused up to 70,000 deaths via cancer and radiation poisoning.

Locals in the rural region of Belarus most affected by the meltdown have for years complained that they suffer significant health problems. In a USA Today profile, residents of the town of Sudvoko protested that “many of us in the area have cancer or diabetes” and that children in the region appear born with significant health defects. The profile notes that those interviewed were quick to imbibe in vodka and expressed that their insurmountable health problems drove them to hopelessness.

Those who suggest the radiation did significantly less damage than what is commonly portrayed in popular culture argue that the true killer was the panic that followed the attack, triggering a mass exodus from northern Ukraine. The population has never recovered in size. Earth sciences expert James Conca wrote in Forbes this week that “the fear did cause about 50,000 deaths of Chernobyl refugees from alcoholism and depression in the decades following, along with over 100,000 unnecessary abortions in the few years following the accident.”

The relatives of the 31 people who died in the first days of the disaster congregated, as they do every year, at a memorial in Kyiv for the anniversary on Friday. Accompanying them were surviving first responders and Ukrainians present to honor those affected by the disaster.

Ukraine also announced that the “New Safe Confinement,” the apparatus placed over the power plant to prevent further radioactive decay from escaping, passed its final commissioning test on Thursday. The confinement is expected to keep radiation levels moderate and eventually be part of a larger project to ensure the environmental restoration of the area. 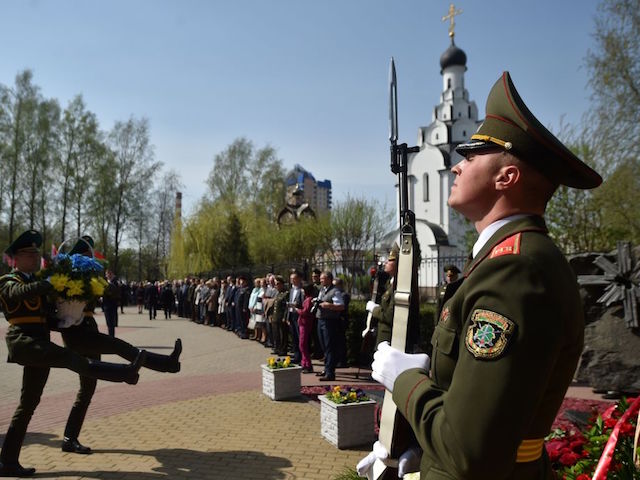 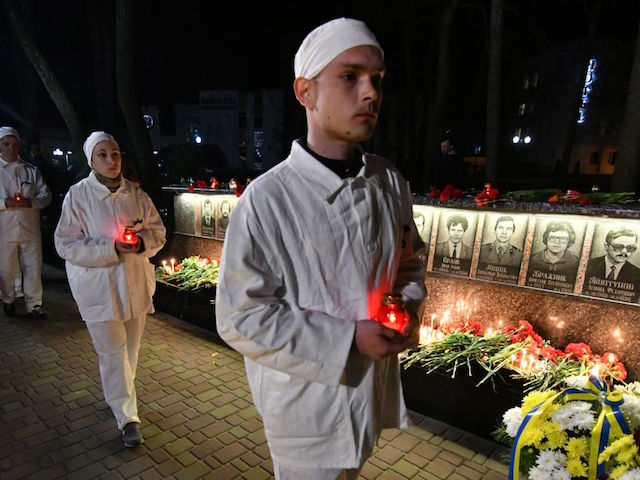 People dressed in uniforms worn by nuclear power plant workers hold candles during a memorial ceremony at the monument for Chernobyl victims in Slavutych, where the power station’s personnel lived, some 50 kilometres (30 miles) from the accident site, early on April 26, 2019.(GENYA SAVILOV/AFP/Getty Images) 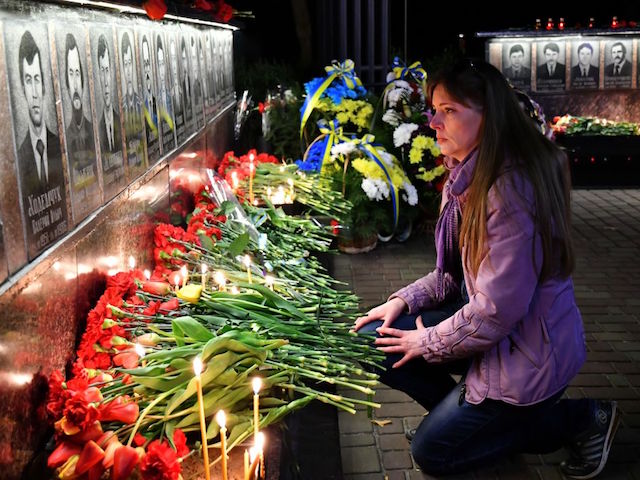 A woman kneels to pay her respect near candles and flowers placed at the monument for Chernobyl victims in Slavutych, where the power station’s personnel lived, some 50 kilometres (30 miles) from the accident site, early on April 26, 2019. (GENYA SAVILOV/AFP/Getty Images)

Belarus also held a national observance in its capital, Minsk, though not without controversy. Dissident groups typically observe the day with a protest march but were unable to do so after the regime of dictator Alexander Lukashenko – the only president Belarus has ever had – refused to provide security for the event. The government demanded $2,400 to send police to secure the event.

“The issue is not about the lack of money. The issue is that we refuse to pay, in principle,” Volha Kavalkova, an opposition leader, told Radio Free Europe/Radio Liberty (RFE/RL).

On the 33rd anniversary of the disaster, Ukraine continues to work to bring awareness to the one benefit it has harvested from the meltdown: a growing tourist industry. Tours of Pripyat taking off from Kyiv are regularly available for adventurous travelers seeking to explore the abandoned town, and are more popular than ever. The Chicago Tribune reported this month that Pripyat saw an unprecedented 72,000 visitors last year, a 22,000-person increase from 2017. Tourism is so popular that Ukrainian authorities have now had to contend with littering, which has increasingly become a problem in the exclusion zone.

“We don’t have Crimea anymore, and less and less people are interested in religion and churches,’’ Sergii Ivanchuk, owner of the tour company SoloEast, told the Tribune. “But we have cheap beer and Chernobyl!”

Belarus reportedly followed suit with tours of their exclusion zone this year.