The BBC’s Science Editor David Shukman recently got back from an expedition to the high Arctic. Amazingly, despite having gone all that way, he seems completely to have missed the big story: that contrary to the doomsday predictions we’ve been hearing from all the experts over the last few years the ice up there seems to be getting thicker and thicker.

Here, courtesy of Paul Homewood at Notalotofpeopleknowthat is the evidence.

Multi-year ice in the Arctic Ocean is now at its highest levels since the winter of 2007. 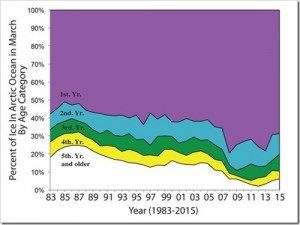 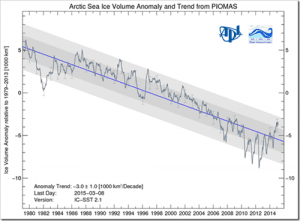 But this wasn’t what Shukman told BBC viewers in his report. On the contrary, Shukman’s version of events could scarcely have been more different.

Changes in the Arctic Ocean are so profound that the region is entering what amounts to “a new era”, according to Norwegian scientists.

A switch from a permanent cover of thick ice to a new state where thinner ice vanishes in the summer will have far-reaching implications, they say.

But you wait for the killer evidence that backs up these extravagant claims. And instead what you get is flannel like this, from the Norwegian Polar Institute’s Jan-Gunnar Winther:

“We have almost no data from the Arctic Ocean in winter – with few exceptions – so this information is very important to be able understand the processes when the ice is freezing in early winter and we’ll also stay here when it melts in the summer,” he explained.

“A new era has entered, we are going from old ice to young ice, thinner ice and the climate models used today have not captured this new regime or ice situation.

“So knowing how it is today can improve climate models which again improve the projection for global climate change.”

Well hang on, just a second. If there’s “almost no data from the Arctic Ocean in winter”, how come Winther has been able to reach such hasty conclusions? How can he be so sure that what he bills as a “new era” isn’t in fact just an entirely normal part of a multi-decadal Arctic climate cycle? What does he say about the sea ice growth – shown on the charts above – since 2007?

And if the thinning of Arctic sea ice is really so dire a problem, how come the research vessel RV Lance – on which Shukman stayed for his Arctic jolly – only got as far as it did with assistance from an icebreaking vessel KV Svalbard?

These are all pretty basic journalistic questions that any half-way curious, Old Etonian Science Editor ought in all conscience to have asked. The fact that he failed to do so wouldn’t perhaps matter so much if he worked for an obviously parti-pris newspaper like the global-warming obsessed Guardian or the Independent.

But Shukman, remember, works for the BBC: an institution which is not only required by its Charter to remain politically impartial but which also becomes extremely petulant and defensive at the suggestion that it is guilty of any kind of left-wing bias. So how, exactly, does he excuse the one-sidedness of his report?