Australia’s Great Barrier Reef is doing just fine with vast sections defying every forecast of impending doom made by climate catastrophists over the past 30 years, a report Thursday outlines.

Coral cover on two-thirds of the iconic reef, which is seen as a bellwether of ocean health, has reached its highest level since records began 36 years ago, according to marine scientists monitoring the ecosystem.

The Australian Institute of Marine Sciences (AIMS) said in its annual report the reef is vibrant and flourishing although challenges do remain for such a “resilient system” that “still maintains that ability to recover from disturbances,” AIMS monitoring programme leader Mike Emslie confirmed.

“But the worrying thing is that the frequency of these disturbance events are increasing, particularly the mass coral bleaching events,” he continued.

Earlier this year saw the first mass bleaching during a La Niña year, a natural climate cycle which typically brings cooler temperatures that allows the coral to recover. It was the fourth mass bleaching event in seven years, Sky News reports.

Each time the reef has managed to fully recover and generate growth lost to natural challenges as nature’s resilience triumphs over natural setbacks.

The latest report on the reef’s health comes as UNESCO considers whether to list it as “in danger”, following a visit by the U.N. body in March. 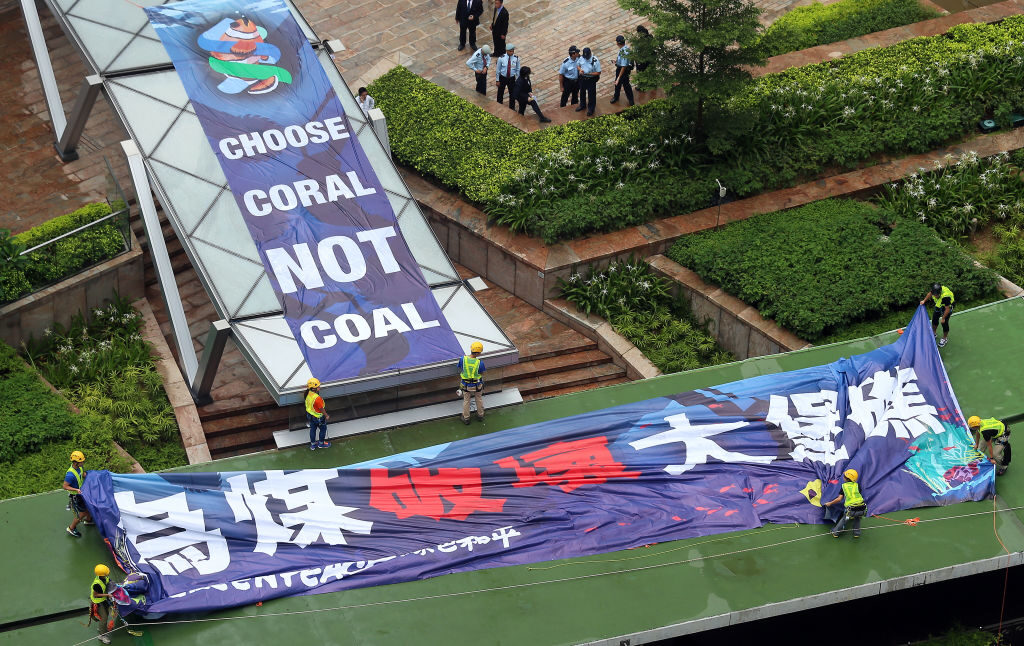 File/23JUN15/Greenpeace activists setting up banners next to The Forum at Exchange Square in Central to protest against Standard Chartered’s role in a coal mine that allegedly threatens the World Heritage Great Barrier Reef in Australia. (K. Y. Cheng/South China Morning Post via Getty)

The matter was due to be discussed at a meeting of the World Heritage Committee in Russia in June, which was then postponed, according to Sky News.

In a key measure of reef health, AIMS defines hard coral cover of more than 30 percent as high value, based on its long-term surveys of the reef.

The Great Barrier Reef Marine Park Authority, which manages the reef, says despite the latest positive news the outlook for the icon is “very poor” due to “climate change.”

Remember when Al Gore pulled his global warming countdown clock nonsense decades ago? It's the oldest trick in the Democrat playbook: we MUST act immediately and do what we say or else…CATASTROPHE! Get real. https://t.co/tSVgi1RWvr

This echoes news outlets like the Washington Post which in 2017 published a piece that outlined, “An ecological catastrophe is unfolding off Australia’s coast: Humans are killing the Great Barrier Reef, one of the world’s greatest natural wonders, and there’s nothing Australians on their own can do about it. We are all responsible.”

In January of this year, it was predicted coral reefs that anchor a quarter of marine wildlife and the livelihoods of more than half-a-billion people will most likely be wiped out even if global warming is capped within Paris climate goals, researchers warned.

The latest survey shows the same coral reefs are even more resilient than anyone has previously forecast and are well adapted to the continual vagaries of the earth’s climate.