Chinese propagandists are highly adept at playing the climate change movement with grandiose promises of “carbon neutrality” at some point in the far future, even as China pumps out gigantic amounts of carbon and pollution today.

On Wednesday, China’s state-run Global Times abandoned those conciliatory gestures and bluntly told Western environmentalists to stop hassling Beijing about its extensive use of coal power – giddily taunting Europeans by bragging that China’s use of coal means no blackouts during a broiling-hot summer.

In the opening paragraphs, the Chinese propagandists simultaneously bragged about being the world’s biggest polluter and lectured the West about “sabotaging climate cooperation with China”:

As the “unprecedented heat wave” is scorching Europe and the US, self-claimed climate change leaders and vanguards, especially the US, are struggling to deal with the pressing crisis. With US President Joe Biden hesitating to declare climate emergency, and European countries forced back to use coal again, Chinese scientists said those facts should cool Western countries down from chiding China on the issue of coal; and make them realize people’s lives should be the priority.

With top environment officials from China, the US and Europe holding frequent meetings recently, experts noted the warming globe is pressing major powers to join hands in tackling this dilemma. They urged Washington to stop sabotaging climate cooperation with China, as it is US’ paranoia and poisoned political situation that stands in the way of achieving fruitful results with China, and delivering positive climate achievements to the world.

The Global Times ghoulishly counted the number of Europeans killed by extreme heat, touted China’s complete freedom from “power rationing or power cuts” thanks to its huge and growing arsenal of coal-fired power plants, and then needled the Europeans for not destroying their economies fast enough to please the climate change movement. 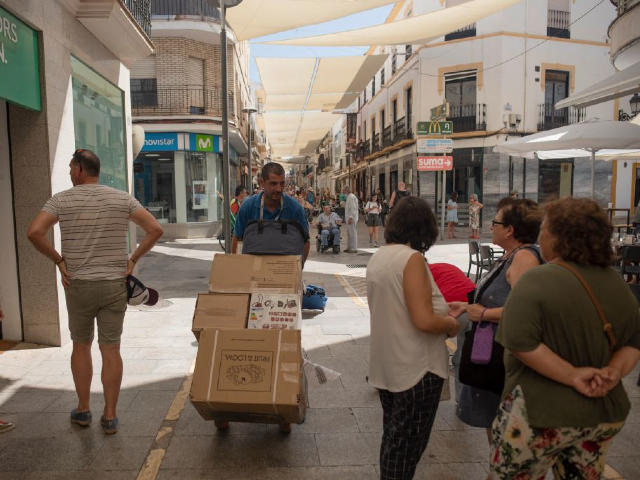 A delivery worker pushes a trolley in Ronda on July 21, 2022. – The death of a Madrid street sweeper from heatstroke during the heatwave gripping Europe shows the dangers outdoor workers face from extreme temperatures. With heatwaves predicted to become more frequent and intense, unions are pushing for more protection for rubbish collectors, farm labourers, construction workers and others who work in the heat. (Photo by JORGE GUERRERO / AFP)

The Chinese Communists also goaded President Joe Biden for losing his nerve and failing to declare a “climate emergency” that could have given him the authoritarian powers he needed to wipe out American industry:

Rejoining the Paris climate pact is hailed as a symbolic and practical first step for Biden after he took office last year. Yet when the heat wave became more pressing, Biden only plans to promote new efforts to combat climate change, but not declare an emergency that would unlock federal resources to deal with the issue despite increasing pressure from climate activists and Democratic lawmakers, AP reported.

Experts said that Biden’s hesitation in declaring climate emergency is a vivid demonstration of how US’ ambitious verbal promises will eventually end up being dwarfed by its petty actions.

Communist China is, by a very wide margin, the worst polluter on Earth, even without getting into carbon emissions and the climate-change debate – and it is the world leader in carbon emissions, too. Previously quiescent environmental groups are beginning to grumble about the Chinese racing to build as many new coal-fired power plants as they can, creating a demand for coal that is steadily increasing, even as Beijing parrots climate-change rhetoric to attack its competitors in Western industry.

The Global Times noted that European industrial powers are “turning to coal to ensure they have enough power to keep the air conditioning running, and in a few months, the heat on,” largely due to panic about Russia cutting off Europe’s supply of gas in retaliation for sanctions against the Russian invasion of Ukraine.

All of those fabulously expensive windmills and solar panels on which the Europeans have been splurging wildly for the past few decades have not made them confident of their ability to make do without Russian fossil fuels. On the contrary, the Europeans just learned to their dismay that solar panels do not work on cloudy days and they do not work properly when they have too much sun, either.

Beneath its tidal waves of environmental hypocrisy, the Global Times is essentially correct that Europe is panicking over the limits of “green energy” and the true cost of climate change theology, exactly as China abandoned its desultory efforts to placate climate activists last year after a string of blackouts threatened to shutter its factories.