CARACAS, Venezuela – Puerto Rican media sites published what they alleged to be a court filing on Monday indicating that the record label behind superstar rapper — Brad Pitt co-star in Bullet Train — Bad Bunny and other top Latin artists received major funding from a former official in Hugo Chávez’s socialist dictatorship.

The Chávez regime and its successor, which currently rules Venezuela unconstitutionally, are believed to be involved in a variety of illicit activities, including cocaine trafficking and entanglements with international terrorist organizations. Socialist Party strongman Diosdado Cabello, for example – one of dictator Nicolás Maduro’s closest confidantes – is an alleged drug lord, whom the State Department currently has a $10 million bounty out on. Cabello is considered to be one of the leading heads of the Cartel of the Suns. Maduro’s Oil Minister Tareck El Aissami, another top regime official, reportedly has deep ties to the terrorist organization Hezbollah and serves as a fundraiser; Immigration and Customs Enforcement (ICE) put him on their “most wanted” list for international narcotics trafficking in 2019.

The possibility that funding from a Chávez regime official may have fueled the careers of some of the world’s most prominent music acts has prompted significant intrigue and scandal in Latin America.

The website eyboricua.com and Puerto Rican news outlet Noticel separately published a document this week they alleged was a filing in a lawsuit between Noah Assad, the head of Bad Bunny’s record label and his manager, and his ex-partner from March. In it, the partner in question allegedly claims that former Chávez Vice Minister of Legal Security Rafael Jiménez Dan is the majority owner of Rimas Entertainment, the record label in question, and heavily funded Assad’s ventures. 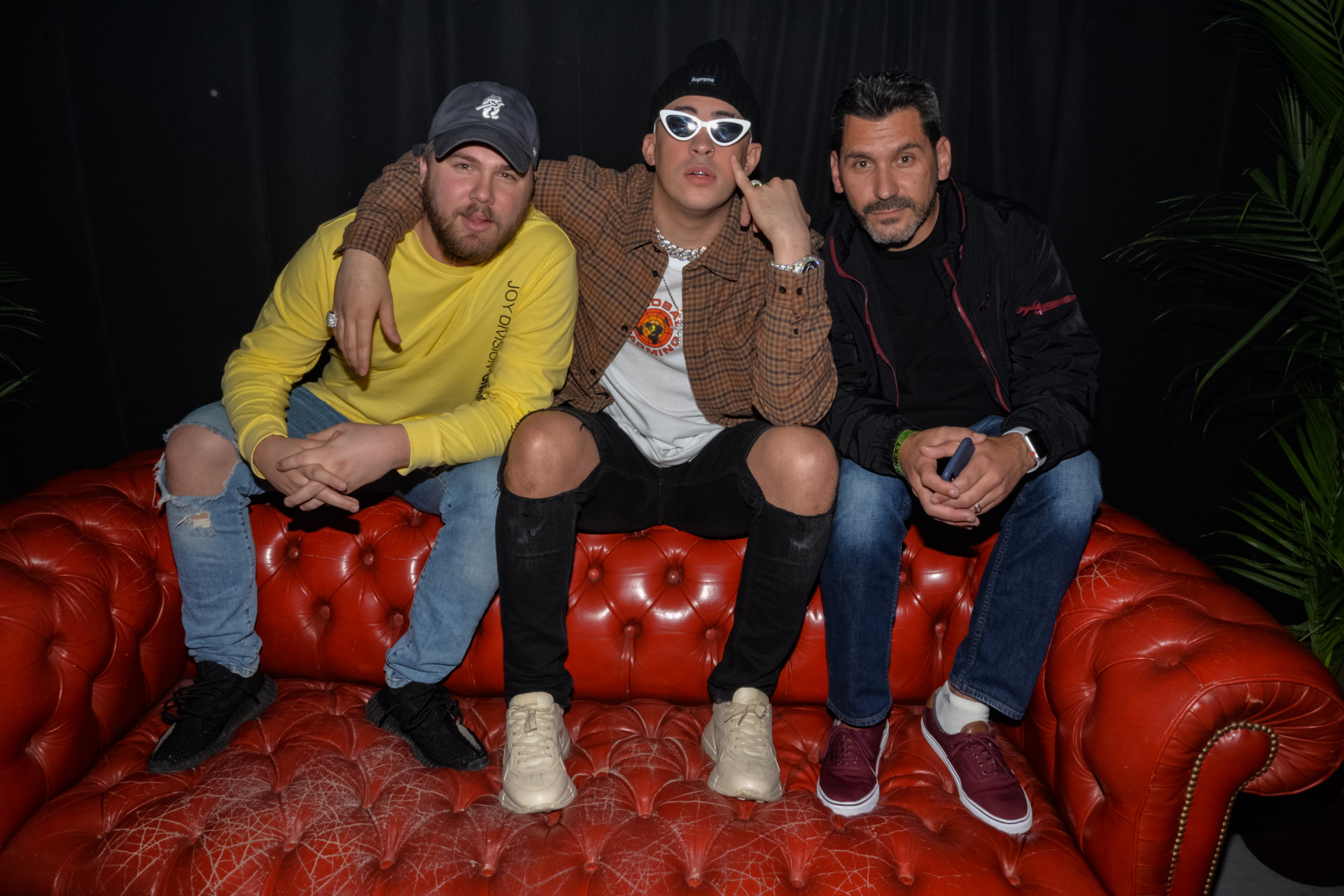 Noah Assad, Bad Bunny and Jerry Pulles backstage at Apple Music Celebrates ‘Up Next’ Artist Bad Bunny with a concert for fans at Bar 1306 in Miami, Florida on March 8, 2018. (Manny Hernandez/Getty Images for Apple Music)

Gretchen Hernández Rivera, Assad’s common law wife, is allegedly demanding 50 percent of all assets obtained during the time she and Assad were in a relationship between 2011 and 2021, including the label house Rimas Entertainment LLC.

The text of Hernández Rivera’s lawsuit claims that Noah Assad built Rimas Entertainment with a $2-million investment from Jiménez Dan in 2014. Jiménez served as Chávez’s vice minister of legal security between 2006 and 2013, when Nicolás Maduro took over after Chávez’s death.

The document also claims that “Jiménez Dan lent and/or invested money in Assad to open a recording studio. That same year, Hernández and Assad managed to make one of their dreams come true when Rimas Entertainment was incorporated, with additional money contributed by the Venezuelan Jiménez Dan ($2 million), who also paid Noah Assad’s personal debts.”

The filings allege that Rafael Jiménez Dan owns 51 percent of the shares of Rimas Entertainment. Hernández, the ex-partner, is also suing the former Chávez official. Jiménez Dan asserts that he should not be included in the lawsuit, as Gretchen Hernández Rivera is suing over Noah Assad’s participation without him being involved as a partner.

According to the alleged legal filing, Rimas’s representation of Bad Bunny, whose real name is Benito Martínez Ocasio, is estimated to be valued around $500 million. Furthermore, the lawsuit claims that the collective estimated representation value of all other artists under the Rimas label to be an additional $500 million.

Bad Bunny is one of the world’s most popular musical artists; Spotify crowned him its most-streamed artist on the platform in 2021. The rapper currently holds ten positions on the Billboard Hot 100 charts – all of them songs exclusively in Spanish – and is ubiquitous in Latin American media, including advertisements, music radio, and entertainment reports. He is currently attempting to break through into mainstream American pop culture, starring in a summer blockbuster film, Bullet Train, alongside Brad Pitt and featuring as a WWE wrestler.

According to publicly available information, Rafael Jiménez Dan currently resides in the state of Florida. He is a retired captain of the Venezuelan army and graduated alongside Diosdado Cabello. In addition to his position as vice minister, Jiménez Dan held other positions in Chávez’s government and is the owner of Rialfi Consulting, a company that has provided services to Venezuelan government institutions such as the state-owned Banco del Tesoro (Treasury Bank) and Venezuela’s Social Security Institution (IVSS).