Iron Man star and former boxer Mickey Rourke broke down in tears recently talking about how he once thought Vladimir Putin was “empathetic” but is now responsible for the devastation in Ukraine.

In an interview with British talk show host Piers Morgan, Rourke said that when he met Putin in 2014, he was convinced that the Russian strong man was empathetic for the plight of people. But now he doubts his initial assessment in light of Russia’s invasion of Ukraine.

Rourke said that when he met with Putin about childhood cancers, he thought Putin really cared.

“I looked over at Vladimir, and I could see somebody that was genuinely concerned about where we were and someone who was empathetic and he was there for a sincere reason,” Rourke said.

The Barfly star added that the Putin he sees now, the one in charge of the invasion of Ukraine, “blows my mind,” and added that he is shocked that a “little bell” hasn’t gone off in Putin’s head to warn him off the invasion.

But Rourke’s allusions are shattered, especially after seeing the image of an elderly Ukrainian man who lost his whole family during Putin’s war. He choked back tears talking of the photo.

“The image that bothered me the most,” Rourke told Morgan. “I saw this old man old and a little grey kitten and the old man survived his house being bombed,” Rourke said. “He lost five family members and the only thing he had, it’s kind of hard for me to talk about it, the only thing he had was this little grey kitty. I looked at that image … and I said how can I have anything to worry about? Losing a movie? Or I’m having a bad day?”

Rourke closed his comments on the Russian leader with a warning.

“You’re not going to live forever. Look at Peter the Great, Napoleon, what happened to them trying to get more and more,” Rourke exclaimed. “You’ve got your power and your money. Just live your life and let these people in Ukraine be independent in the Democratic society they want to live in and just stop today. Not tomorrow. Just stop right now.” 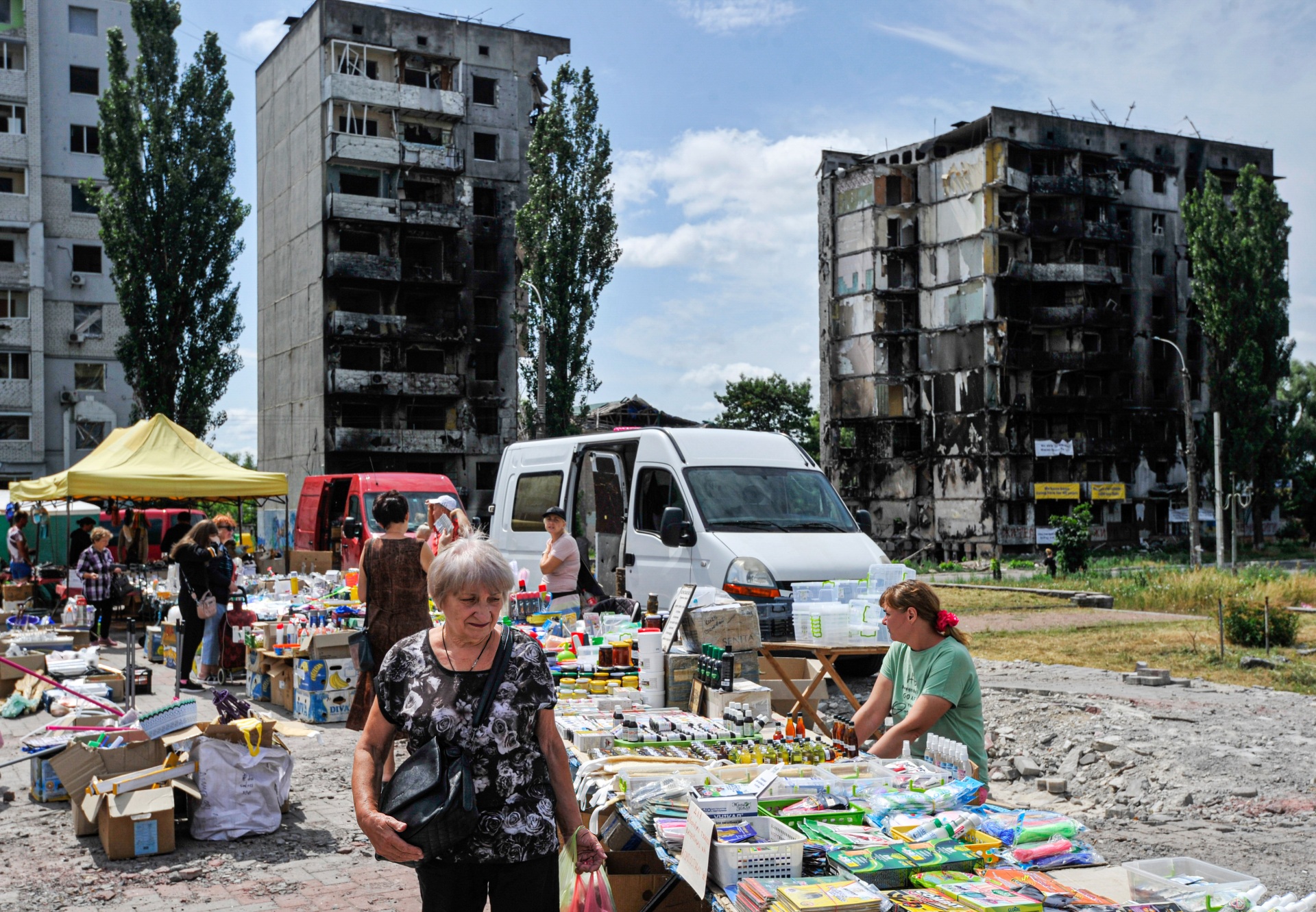 Residents of Borodyanka visit the fair near a residential area destroyed by the Russian army shelling in the city of Borodyanka, northwest of the Ukrainian capital Kyiv. (Sergei Chuzavkov/SOPA Images/LightRocket via Getty Images)

Rourke also trashed actor Tom Cruise, calling one of Hollywood’s highest-paid actors “irrelevant” because he has played the same character for 35 years.

“That doesn’t mean shit to me,” Rourke said referencing the box office success of the Top Gun sequel.

“The guy been doing the same part for 35 effing years. I got no respect for that,” Rourke added. “I don’t care about money or power. I care about when I watch Al Pacino or [Christopher] Walken working, or De Niro’s early work and Richard Harris’s work and Ray Winstone’s work, that’s the kind of actor I want to be like. Like [Montgomery] Clift and [Marlon] Brando back in the day. A lot of guys that tried to stretch as actors.”

Rourke has a number of projects in pre and post-production, including a role in embattled director Roman Pulaski’s new film, The Palace. His most recent role was in the direct to video action film, WarHunt.