Gunmen in Mexico left a mutilated body on the hood of a torched armored truck near the border with Texas. The clash is the latest in a series between the Gulf Cartel and the Cartel Del Noreste (CDN) faction of Los Zetas for control of drug and human trafficking routes.

The shootout took place last week in Dr. Coss, Nuevo Leon, 24 miles south of Rio Grande City, Texas. It remains unclear how many vehicles and gunmen took part. The Mexican Army responded to a call on Friday about a suspicious scene along Highway 33.

Authorities found a torched armored vehicle with a headless body on the hood with the severed head inside the truck. The area where the vehicle was found appears to have been the scene of a fierce battle. 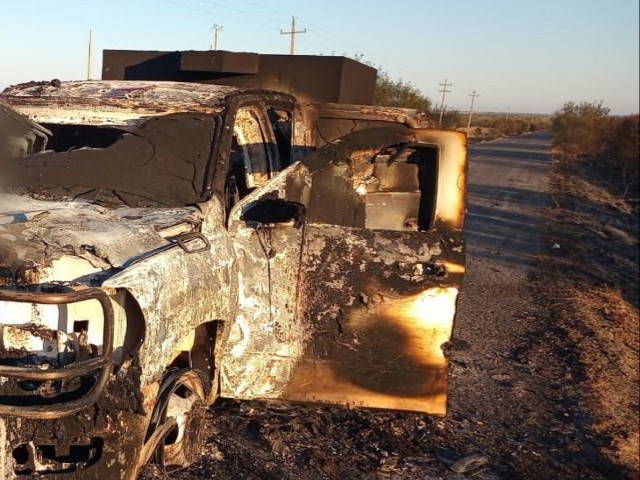 For months, the cartels have engaged each other in shootouts using armored vehicles and heavy weaponry. The Gulf Cartel has been trying to keep the CDN-Los Zetas from taking over key smuggling areas known to have lighter U.S. law enforcement footprints. Although Mexico’s military has been unable to stop these organizations outright, their clashes have pushed away from cities.

Editor’s Note: Breitbart Texas traveled to Mexico City and the states of Tamaulipas, Coahuila, and Nuevo León to recruit citizen journalists willing to risk their lives and expose the cartels silencing their communities.  The writers would face certain death at the hands of the various cartels that operate in those areas including the Gulf Cartel and Los Zetas if a pseudonym were not used. Breitbart Texas’ Cartel Chronicles are published in both English and in their original Spanish. This article was written by “J.C. Sanchez” from Tamaulipas.