At least six people arrived illegally in India’s Tamil Nadu state on Wednesday after traveling there by boat from Sri Lanka, an island nation located 34 miles off India’s southern coast at its shortest distance, the Hindustan Times reported on Thursday, noting that the incident was indicative of a growing migration wave as dozens of Sri Lankans have fled the financially troubled country for India since its economy effectively collapsed in March.

The group of six people who arrived in Tamil Nadu from Sri Lanka on July 27 belonged to two families and included three children, the Hindustan Times relayed on July 28 citing an original report by the Press Trust of India (PTI). The two families fled their hometown of Jaffna, Sri Lanka, in recent days before boarding a boat that sailed through the waters of the Palk Strait — which separates Sri Lanka from India — toward nearby Tamil Nadu state. Indian government officials “rescued” the group from an islet off Tamil Nadu’s coast and subsequently transported them to Tamil Nadu’s Mandapam refugee camp.

“Over the past few months, many Sri Lankans – most of them Tamils – have left the island nation to enter India through Tamil Nadu as they were unable to survive the crisis, with prices of essential commodities and fuel skyrocketing there,” PTI observed on July 28. 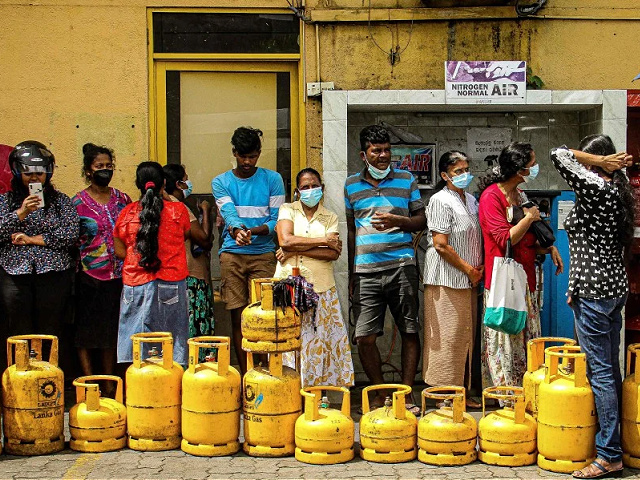 People queue up to buy Liquefied Petroleum Gas (LPG) cylinders in Colombo on June 5, 2022. (Photo by AFP) (Photo by -/AFP via Getty Images)

“They were dropped near Rameswaram island [in Tamil Nadu] by boatmen and rescued by the Indian Coast Guard and brought to Dhanushkodi to be handed over to the police,” according to PTI.

“Mandapam, the refugee centre in Rameswaram, Tamil Nadu has welcomed close to 85 Sri Lankan Tamils who fled the island over the last few weeks,” The Citizen, an Indian news website, reported on May 26.

Sri Lanka’s economy entered a crisis mode around early March after Colombo effectively ran out of foreign currency reserves that it traditionally used to purchase vital imported goods, such as food, fuel, and medicine. The development caused severe shortages of basic goods across Sri Lanka. This prompted citizens to urge the nation’s government to resign for mismanaging Colombo’s economy. The anti-government protests devolved into mob violence on several occasions over the past few months before Sri Lanka’s former president, Gotabaya Rajapaksa, finally ceded to public pressure and resigned on July 14.

Sri Lanka’s ties to India’s Tamil Nadu state extend beyond physical proximity. The two entities are connected via their considerable Tamil populations. Tamils are members of an ethnolinguistic group that traces its origins to a region spanning modern-day Tamil Nadu and Sri Lanka. Tamils are connected by the Dravidian language, which is considered one of the world’s most ancient and boasts a recorded existence of 2,000-plus years.