The director for the Chinese Center for Disease Control and Prevention (CDC), Gao Fu, announced he would step down this week, the state-run Global Times revealed on Wednesday.

Gao undermined the Communist Party on multiple occasions while managing the response to the Chinese coronavirus pandemic, initially declaring definitively that the virus originated in an illegal animal meat market in central Wuhan – contrary to Party officials, who now say the virus originated in a U.S. Army facility in Maryland without evidence – and later lamenting publicly that Chinese-made coronavirus vaccines “don’t have very high protection rates.”

Gao took on the job in 2017 and has a background in veterinary medicine.

Gao, 60, claimed to be resigning as a product of his age. His replacement, Shen Hongbing, is 58, the South China Morning Post observed on Wednesday.

The Global Times, which typically acts as a mouthpiece for the Chinese Communist Party, did not belie any tensions between Gao and the Chinese government in its announcement of his departure. It cited a top government health expert, Wang Hesheng, as effusively praising Gao on Tuesday after news had broken of his retirement.

“Since his appointment as head of the CDC in 2017, Gao Fu has fulfilled his responsibility and made great contributions in promoting the disease prevention and control in China, especially leading all CDC staff to fight against [Chinese coronavirus],” the Global Times paraphrased Wang as saying.

“Isn’t it strange that this once-in-a-century bat coronavirus pandemic just happened to emerge within a few miles of China’s biggest laboratory researching bat coronaviruses? Shouldn’t we at least look at that lab?” https://t.co/qjtCT61DGI

The state newspaper left the door open to Gao continuing to play a role in the Communist Party’s public health management despite his retirement.

The Morning Post reported that, at the event covered by the Global Times, Wang suggested that the change in leadership at the CDC would result in “reform” that would give dictator Xi Jinping more influence over the institution, a detail omitted from the Global Times article on Gao’s departure.

Wang reportedly expressed hope that the new CDC would “have a clear-cut stance on politics, comprehensively strengthen the [Chinese Communist] Party’s leadership [of the CDC] … and implement General Secretary Xi Jinping’s major directives and instructions to the letter” – suggesting Gao had failed to meet these demands.

Gao’s actions at the helm of the Chinese CDC at the onset of the Chinese coronavirus pandemic will likely be the core of his legacy. Gao first addressed the international community in January as mounting reports began surfacing out of Wuhan, a central Chinese city of 11 million people, of large numbers of patients at local hospitals exhibiting symptoms of an unknown respiratory virus. China initially denied that it had a problem even as the World Health Organization (W.H.O.) received, then ignored, messages from neighboring Taiwan that its intelligence agency had cause for concern regarding the illness.

After the W.H.O. belated confirmed the discovery of the Chinese coronavirus, Gao held a press briefing in January 2020 where he declared, “the origin of the new coronavirus is the wildlife sold illegally in a Wuhan seafood market.”

As the outbreak in Wuhan became a pandemic – as a result of Chinese officials letting 5 million people leave Wuhan in the early days of the outbreak and the government hosting banquets for tens of thousands of people – the Chinese Communist Party began vocally denying that Gao’s version of events was true. The Chinese Foreign Ministry now maintains, without evidence, that the virus originated in a U.S. Army facility in Maryland and that American officials covered up coronavirus cases by diagnosing them as lung injuries.

Chinese officials have yet to explain the absence of any evidence that anyone has been infected through contact with an individual diagnosed with a lung injury, given the extremely infectious nature of the Chinese coronavirus and the fact that no isolation measures are taken when treating injured patients, as injuries are not contagious.

John Ratcliffe stated Monday that the notion of the coronavirus escaping from China’s Wuhan Institute of Virology (WIV) is “very close to a certainty.” https://t.co/KOzHHJVNOW

Chinese media insist that, contrary to Gao, any claim that the Chinese coronavirus originated in Wuhan is a “conspiracy theory.” No evidence exists of any cases of Chinese coronavirus diagnosed outside of Wuhan before the initial confirmed cases in the city in late 2019.

Notably, the W.H.O. concluded in a study following a visit to Wuhan in early 2021 that the most likely way the Chinese coronavirus first infected humans was by first infecting an intermediate animal through contact with its original host, then infecting its first human patient.

In April 2021, Gao said at a press conference that Chinese-made vaccines “don’t have very high protection rates” and expressed hope that Chinese laboratories would engage in more exploration of the use of mRNA technology to develop new products, following the lead of American companies like Pfizer and Moderna. Pfizer’s coronavirus vaccine product was developed in tandem with a Chinese company, Fosun Pharmaceuticals.

Gao’s remark caused a global stir, particularly in light of the regime’s widespread promotion of its vaccine products from companies like Sinovac Biotech and Sinopharm to the rest of the world. Later in the year, dictator Xi Jinping himself would declare Chinese-made vaccines a “global public good” and offered to sell them to poorer countries that could not afford superior products from America.

Shortly after Gao made global headlines with his remark, he offered the Global Times an interview in which he claimed that journalists repeating his remarks verbatim was a “complete misunderstanding” and that he still had faith in Chinese vaccine products. 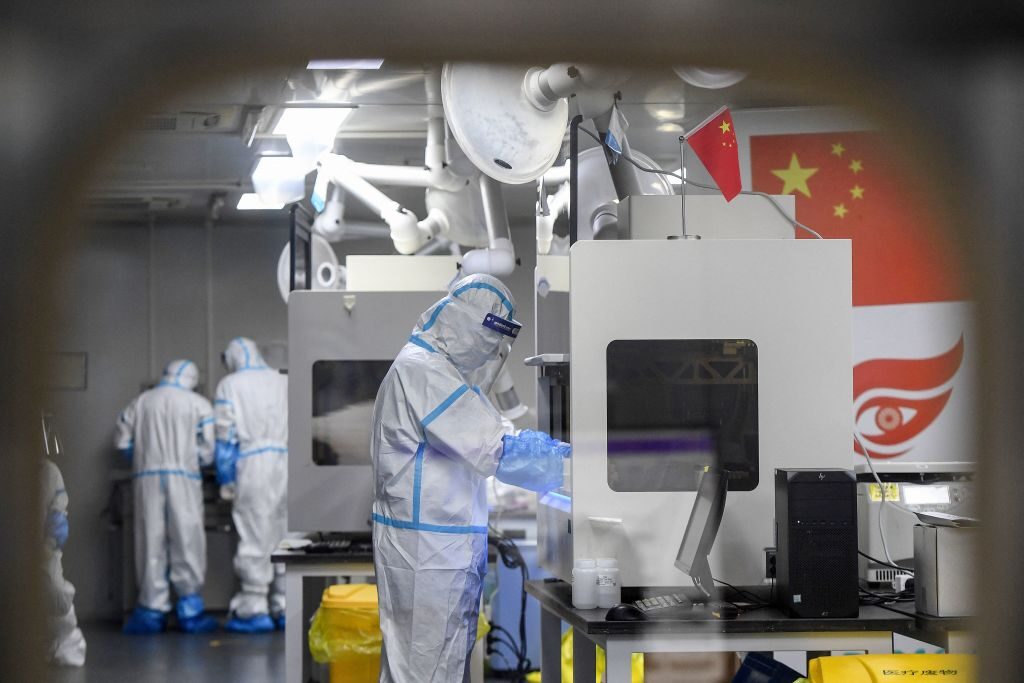 Laboratory technicians wearing personal protective equipment (PPE) work on samples to be tested for the Covid-19 coronavirus at the Fire Eye laboratory, a Covid-19 testing facility, in Wuhan in China’s central Hubei province early on August 5, 2021.  (STR/AFP via Getty Images)

“The protection rates of all vaccines in the world are sometimes high, and sometimes low. How to improve their efficacy is a question that needs to be considered by scientists around the world,” Gao told the government propaganda outlet. “In this regard, I suggest that we can consider adjusting the vaccination process, such as the number of doses and intervals and adopting sequential vaccination with different types of vaccines.”

In July of that year, Gao escalated his enthusiastic endorsement of the vaccines he had disparaged as barely functional months prior by claiming that he had personally received doses of three different Chinese-made coronavirus vaccines.

“I had been vaccinated with domestically produced vaccines as early as May last year, and I was [among] the first group of people who tried the new thing,” Gao claimed. “I have received three shots so far. The types of vaccines and manufacturers are different, but I don’t feel any discomfort. The reason for this is because I have confidence in the country’s vaccines.”