An expert with China’s Center for Disease Control (CDC) speculated during a press briefing on Thursday that the Communist Party may soon limit Chinese coronavirus quarantine periods and potentially loosen other lockdown restrictions, a statement at odds with the country’s top official in charge of pandemic response.

Vice-Premier Sun Chunlan, a senior Politburo member and dictator Xi Jinping’s top coronavirus lockdown enforcer, said on the same day that any changes in lockdown protocol were “not about relaxing rules” and the Communist Party would continue severely limiting the rights of its citizens in the name of public health.

Sun’s remarks echo a warning from the top Communist Party official in Beijing in June that lockdowns would continue for at least another five years. Chinese censors erased that comment following a national outcry on state-controlled social media.

China remains one of the few nations in the world that implements city-wide lockdowns in response to any rise in Chinese coronavirus cases. The strategy has resulted in the mass house arrest of millions of people in the country’s largest metropolises, including Beijing, Shanghai, and Xi’an. The Shanghai lockdown in particular – which began in April and officially ended in June – prompted significant anxiety among foreign investors and international businesses seeking to operate in the economic heart of China. Shanghai has not returned to lockdowns officially but has implemented “snap” lockdowns in which millions of people are trapped in their homes until they take a mandatory coronavirus test.

The Communist Party reportedly banned the use of the word “lockdown” in June, an apparent attempt to alleviate global economic concerns.

Tucker Carlson: "China’s rulers want to stay in power forever and in order to do that, they are using COVID restrictions. They’re pretty sure COVID restrictions work. They watched our last presidential election closely." https://t.co/SxEZFeiRPY

Wang was speaking at a press conference on Thursday to announce a new “playbook” for combatting the pandemic and appeared to hint at the opposite of what Sun’s comments indicated on the same day – that new rules would indeed loosen restrictions on citizens.

“We will continue to collect and study new problems and difficulties that locals are facing in dealing with [Chinese coronavirus] outbreaks in following the ninth [Chinese coronavirus] prevention playbook, such as whether the quarantine period can be further shortened,” Wang reportedly said, “and low-risk areas can be more precisely classified … so as to further update and improve the anti-epidemic measures to minimize the impact of the epidemic prevention and control measures on China’s economic and social development and people’s lives.”

The state-run Global Times propaganda newspaper reported that the CDC was looking to modify coronavirus protocol specifically to protect “economic growth,” which has cratered in the face of ongoing lockdowns.

The Times also reported, however, that Wang hinted at further restrictions for Chinese citizens on travel – perhaps stopping short of locking people in their homes but trapping them in the cities or provinces that they are in.

“Wang said that building better coordination among provinces on identifying people carrying a [Chinese coronavirus] risk so as to reduce risks of trans-regional transmission is being studied,” the state newspaper asserted.

The Global Times emphasized the alleged focus the Communist Party has placed on “science” and “precision” and claimed the policy change was necessary due to allegedly newly discovered variants, not the collapse of the Chinese economy.

China placed all 17 million residents in one of its biggest cities under lockdown on Sunday, as virus cases doubled nationwide. https://t.co/vyFOBbatZJ

The Hong-Kong-based South China Morning Post indicated that many of the changes that will lead to eased restrictions will affect inbound travelers, not Chinese citizens already in the country. Wang discussed shortening quarantine periods in particular for those who travel into China and establishing “various levels of risk,” potentially to entice more travelers.

“The quarantine period for inbound travellers and close contacts of infections was cut by half last month to seven days of centralised quarantine followed by three days of health monitoring at home,” the newspaper observed. It also noted that China’s economy nosedived this year in the face of big-city lockdowns.
“Gross domestic product grew by just 0.4 per cent from the same period last year and far behind the 4.8 per cent in the first quarter. Property sales have faltered and the youth unemployment rate is at a record high,” the Post reported.

Despite economic concerns, Sun Chunlan, in a speech meant for domestic consumption in Hebei province, insisted on Thursday that lockdowns would continue unabated.

“The latest [Chinese coronavirus] control playbook is not about relaxing rules, but about precision, which requires greater efforts to grasp prevention and close loopholes,” Sun warned. 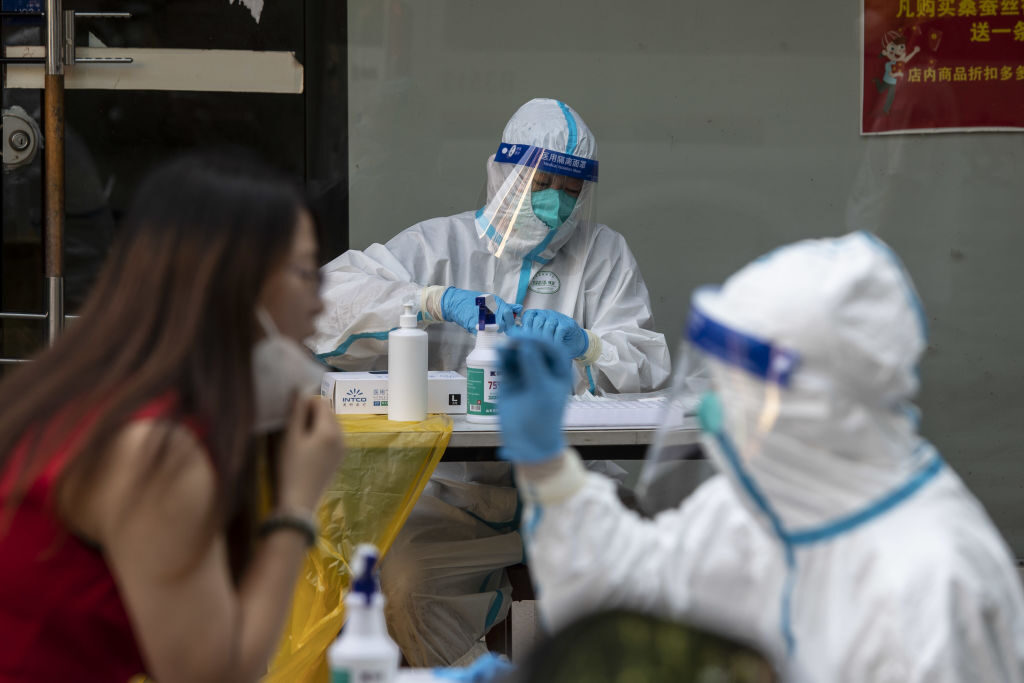 Healthcare workers in protective gear give residents their Covid-19 tests in Shanghai, China, on Sunday, July 10, 2022. (Qilai Shen/Bloomberg via Getty)

Li, speaking to the World Economic Forum, claimed that China had implemented “decisive and timely fine-tuning that put economic stabilization on the front burner” following the Shanghai lockdown.

Xi Jinping has, at press time, abstained from commenting on the latest round of mixed messages on lockdowns. In May, however, Xi intervened to insist that he would not allow any easing of coronavirus policies in the near future.