Now-former President of Sri Lanka Gotabaya Rajapaksa fled the country, reportedly taking a military jet to the Maldives, on Wednesday shortly before he had agreed to resign from office.

Sri Lankan officials conferred presidential powers to Prime Minister Ranil Wickremesinghe, who had also agreed to resign this weekend, as a temporary solution to the power vacuum that the last Rajapaksa family member in power left upon departing the country.

Rajapaksa had refused to resign after months of protests engulfed the nation, a result of what Wickremesinghe described in June as a “complete collapse” of the nation’s economy.

The Democratic Socialist Republic of Sri Lanka is enduring the worst economic crisis in its history, the result of the Rajapaksa family – Gotabaya, his brother and fellow former president Mahinda, and a coterie of at one point over 40 Rajapaksas in ministerial positions at a national level – engaging in irresponsible spending sprees, heavily indebting the country to China, and imposing environmental policies that made it impossible for the country to feed itself. 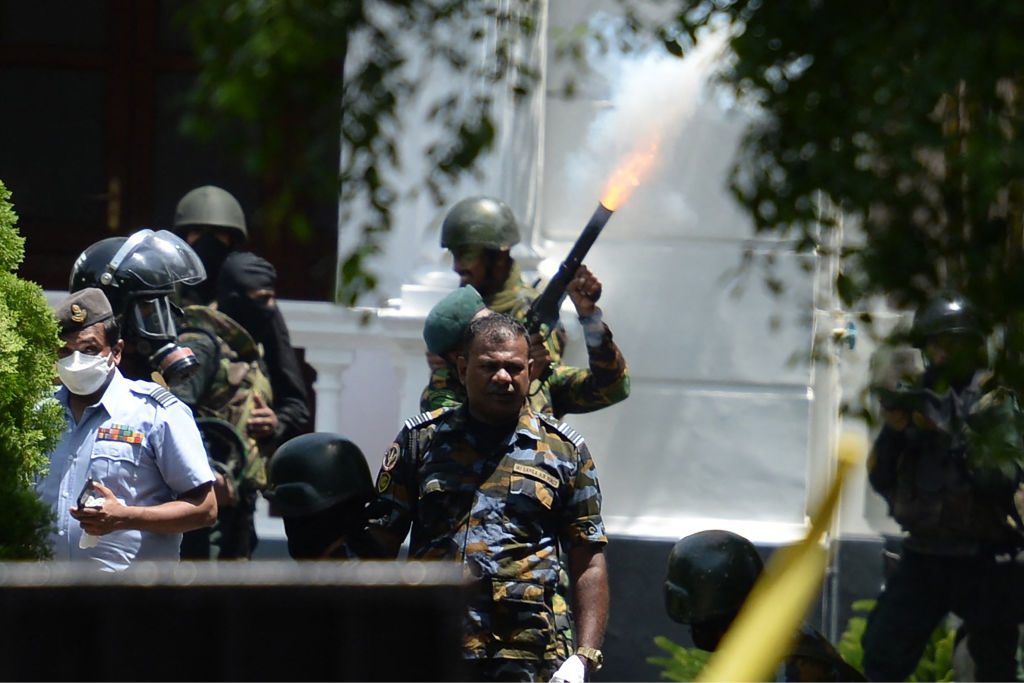 An army personnel fires a tear gas canister to disperse demonstrators during an anti-government protest outside the office of Sri Lanka’s prime minister in Colombo on July 13, 2022. (ARUN SANKAR/AFP via Getty Images)

Sri Lanka ran out of foreign currency reserves and has so much debt, Wickremesinghe said in his June address to Congress, that foreign governments and corporations were hesitant to sell anything to the country even if offered cash.

Sri Lankans are currently struggling to avail themselves of nearly every basic good and service in a functional society: food, medicine, both oil and gas fuels, and reliable access to electricity, among others.

Multiple Sri Lankan news outlets confirmed early Wednesday that Gotabaya Rajapaksa and his wife had fled the country, landing in Male, the Maldives, on Wednesday afternoon. The Sri Lankan Air Force confirmed in a statement that it offered Rajapaksa transport out of the country. Rajapaksa reportedly confirmed his resignation to Sri Lanka’s Speaker Yapa Abeywardena and promised a formal letter would follow before the end of the day.

The news that Rajapaksa had landed in the Maldives, an Indian Ocean island nation neighboring Sri Lanka, prompted local Sri Lankan expatriates to organize protests demanding the country turn him away. Maldives authorities responded with outsized force to crush the protests, according to reports on the ground in Male, having arrested at least one person at press time.

A Sri Lankan citizen arrested during the protest against the Maldivian government for providing a safe haven to President Gotabaya Rajapaksa who fled Lanka in the early hours of Wednesday.

Sri Lanka’s Daily Mirror newspaper reported on Wednesday that Gotabaya is expected to depart the Maldives in the short term and ultimately settle in Singapore, citing unnamed “sources.”

Rajapaksa’s whereabouts prior to fleeing the country were unknown, as protesters had stormed the president’s residence and have been engaging in a nearly week-long occupation party since Saturday. Dramatic images have surfaced since showing throngs of people using the president’s luxury pool, showering in his bathroom, engaging in group sing-alongs using his piano, and eating his food.

Abeywardena announced following the confirmation of Rajapaksa’s abandoning of the country that Prime Minister Ranil Wickremesinghe would serve as acting president until July 20, when Parliament will host a presidential election in which lawmakers will choose the new leader. The status of the office of the prime minister while Wickremesinghe serves as president is unclear at press time. The status of the literal office of the prime minister at press time, however, is clear – protesters broke through security and have occupied it, alongside the president’s home and Temple Trees, the official residence of the prime minister. Wickremesinghe was not living at Temple Trees at the time of the takeover on Saturday; protesters burned down his home this weekend.

A clearly distressed Wickremesinghe addressed the country on television shortly after Rajapaksa’s departure, announcing a formal state of emergency and curfew intended to quell protests and keep citizens from other parts of the country from flooding Colombo and exacerbating the chaos in the capital.

“On Monday, the Party Leaders met to discuss the situation surrounding the resignation of President Gotabaya Rajapaksa. We decided to call for an election next week and to provide security to the Members of Parliament,” Wickremesinghe announced, according to a translation by the Sri Lankan outlet News First. “I also pledged that I would step down as Prime Minister when an all-party government is formed. We decided to meet again on Friday. Thereafter, individuals who wanted to become candidates started talks with other parties for their support.”

Wickremesinghe warned that his intelligence services believed that “some groups” had infiltrated the protests and sought to “obtain control of the country” through mob violence.

“The groups are now protesting around the Prime Minister’s Office. There is no reason for them to come here,” the acting president announed. “They want to stop me from being Acting President and stop me from working with the Speaker to elect a new President. They want to appoint their own candidate.”

The situation in the heart of Colombo remained chaotic on Wednesday evening. A live broadcast currently ongoing by the Daily Mirror showed what appeared to be hundreds of people threatening the integrity of a police blockade outside various government offices.

The Daily Mirror predicted that next week’s scheduled presidential election would offer voters three options: Wickremesinghe, a loyalist of the Rajapaksa Sri Lanka Podujana Peramuna (SLPP) party Dalles Alahapperuma, and the head of the opposition party Samagi Jana Balawegaya (SJB), Sajith Premadasa. The SLPP, the newspaper reported, is divided between Wickremesinghe and Alahapperuma.

“The candidates who get more than 50 percent of valid votes will become the president. Unless any of the contestants cross the 50 percent mark, the preferential votes marked by the MPs will be counted,” the newspaper explained.

Notably absent from the list of contenders is anybody with the last name “Rajapaksa.” The other family members left in the country – most notably, Mahinda, a former president who served as prime minister before Wickremesinghe until protesters burned down his home in May – have remained silent in the face of Gotabaya’s flight at press time. The most vocal political voices on Wednesday were opposition leaders.

Maithripala Sirisena, the president prior to Gotabaya Rajapaksa, denounced Wickremesinghe and claimed that his assumption of the presidency “would violate the people’s aspirations” on Wednesday. 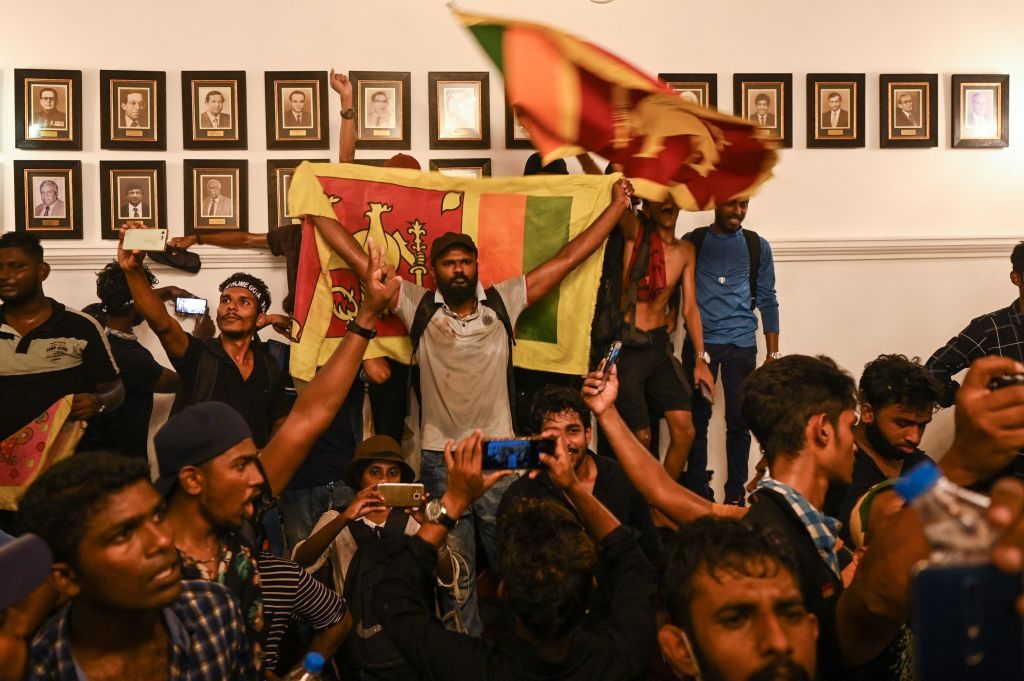 Demonstrators shout slogans and wave Sri Lanka flags inside the office building of Sri Lanka’s prime minister during an anti-government protest in Colombo on July 13, 2022. (ARUN SANKAR/AFP via Getty Images)

“The general consensus of the people of the country, especially among those protesting, is that the Prime Minister should also step down,” Sirisena said. “At this time, the Government has to discuss with those who are involved in this struggle that initiated this historical a revolution, especially those who are in the Aragalaya [struggle].”

Sirisena’s remarks rekindled a longstanding feud with Wickremesinghe that began when the latter served as prime minister while Sirisena was president. Sirisena attempted to forcibly remove Wickremesinghe from office in 2018 to replace him with Mahinda Rajapaksa, prompting a constitutional crisis featuring multiple parliamentary brawls, including one in which lawmakers blew hot chili powder in each other’s faces.

The political fiasco occurred shortly before the Islamic State successfully executed one of the deadliest terrorist attacks in world history on Easter Day 2019. Reports later revealed that Sirisena appeared to have information of an impending attack by jihadists in the majority Buddhist country but did not act in any way to prevent it, instead spending his energy on removing Wickremesinghe.