The Pillar of Shame, a haunting memorial to the victims of the Tiananmen Square massacre in 1989, stood proudly in Hong Kong for over twenty years until Communist goons finally managed to tear it down last December.

The original statue has been buried in storage by the Chinese Communists, who are desperately trying to erase the Tiananmen massacre from history, but replicas are rising around the world with the blessing of the artist.

The original Pillar of Shame is a 26-foot sculpture created by Danish sculptor Jens Galschiot, who said he was “shocked” when his work was placed under heavy guard at the University of Hong Kong, concealed under tarps, and demolished in December 2021. 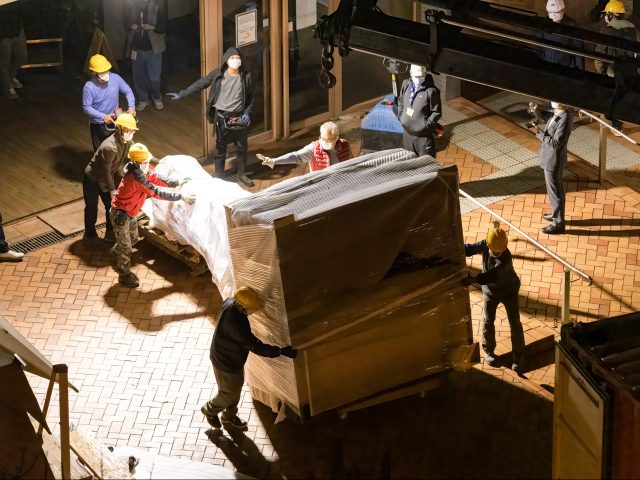 Authorities in Hong Kong tore down the 26-foot-tall Pillar of Shame. It had stood at the University of Hong Kong for nearly a quarter-century (Alex Chan/SOPA Images/LightRocket via Getty Images)

The university implied that it was eliminating the statue because it feared prosecution under the tyrannical “national security law” Beijing imposed on Hong Kong in 2020 to crush the pro-democracy movement. 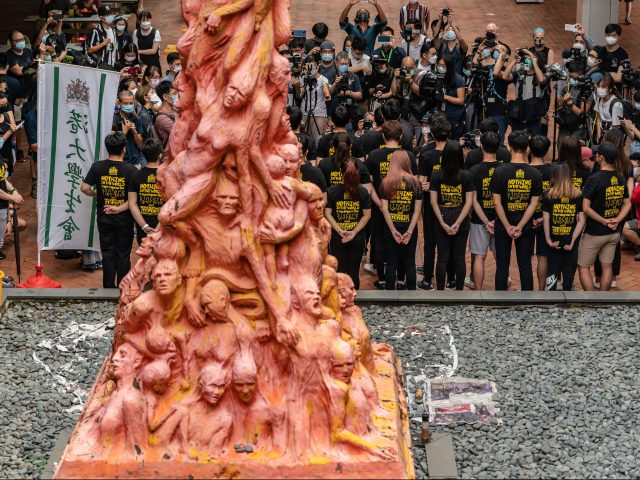 University students gather to clean the Pillar of Shame sculpture by Danish artist Jens Galschiot, to remember the victims of the Tiananmen crackdown in Beijing, at the University of Hong Kong on June 4, 2021. (Photo by Anthony Kwan/Getty Images) 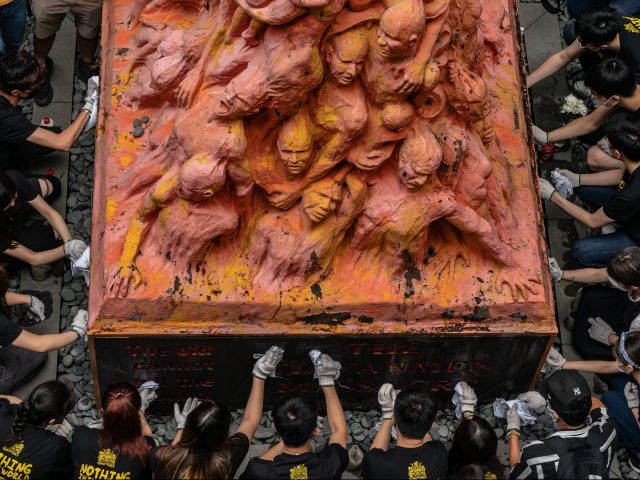 University students clean the Pillar of Shame sculpture by Danish artist Jens Galschiot, to remember the victims of the Tiananmen crackdown in Beijing, at the University of Hong Kong on June 4, 2021. (Photo by Anthony Kwan/Getty Images) 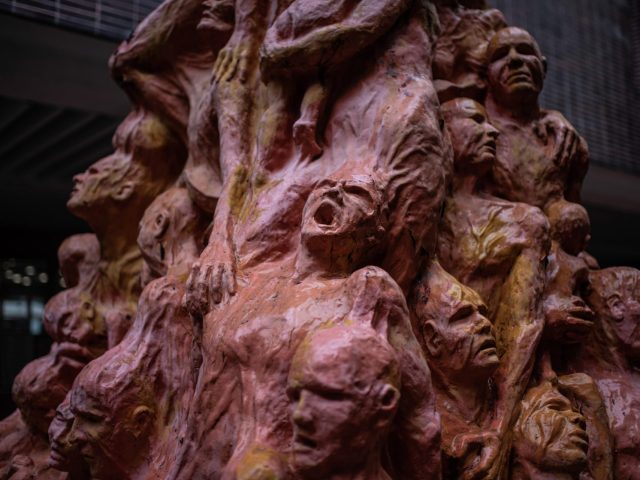 The “Pillar of Shame” statue stands at the Hong Kong University campus on October 15, 2021 in Hong Kong. (Photo by Louise Delmotte/Getty Images) 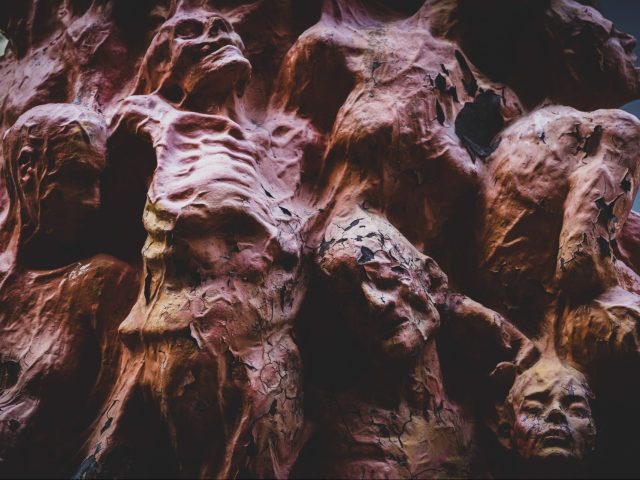 Close-up view of the “Pillar of Shame” before its removal. The “Pillar of Shame”, an artwork by Danish artist Jens Galschiøt, is a tribute to the victims of the Tiananmen massacre that occurred on June 4th, 1989 in Beijing, China. (Charlène Flores/SOPA Images/LightRocket via Getty Images)

“This is my sculpture, and it is my property,” Galschiot said at the time. “I’ve asked Hong Kong University to allow me to go and collect it in person, but I received no response. If they destroy my work, I’ll seek compensation and demand the remaining pieces to be returned to Europe.” 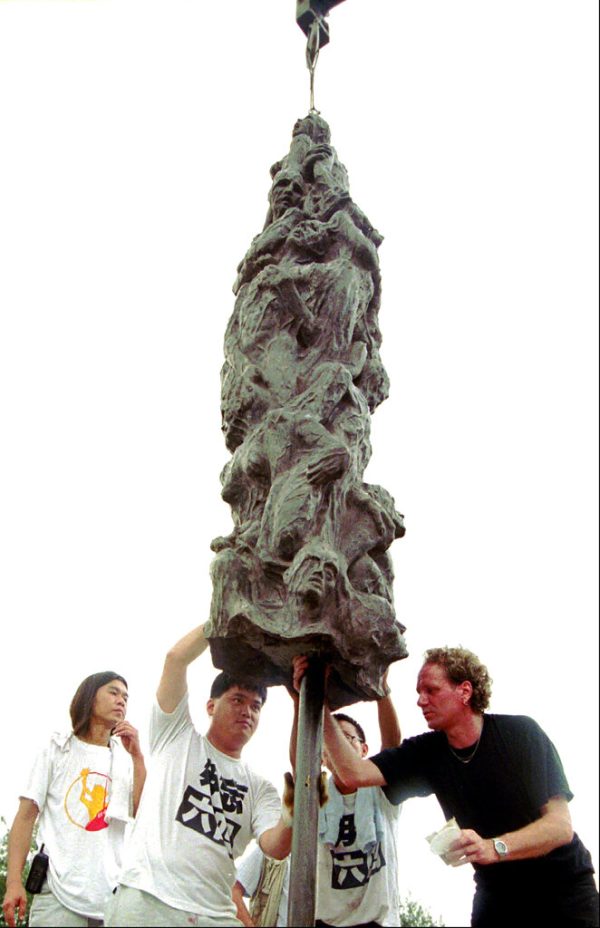 In this June 3, 1997, file photo, Danish artist Jens Galschiot, right, supervises erection of the “Pillar of Shame,” a bronze statue to mark the military crackdown of a pro-democracy student movement in Beijing in June, 1989, at Hong Kong’s Victoria Park. (AP Photo/Vincent Yu, File)

Galschiot compared the Communist demolition of his work to “going to a graveyard and destroying all the gravestones” – which is, incidentally, something the callous regime in Beijing has no compunctions about doing.

“The Pillar of Shame has stood at one of the best and finest universities in Hong Kong and has been a guarantor of a free and open-minded teaching. With the dismantling of the sculpture, the university world in Hong Kong has capitulated – without spiritual freedom, a university is only the shadow of itself,” he mournfully observed.

Galschiot said last week he is still attempting to recover the Pillar of Shame from Hong Kong, but meanwhile he has authorized copies of the statue across the world and assisted with creating some of them. He asks parties interested in raising their own Pillars of Shame to donate proceeds from the work to the Hong Kong democracy movement. 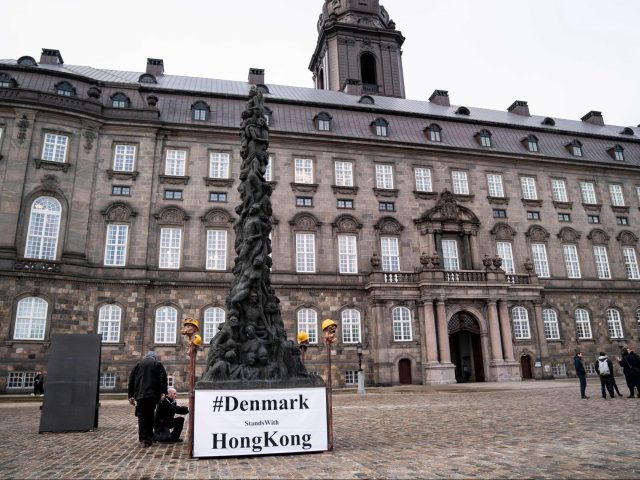 Danish artist Jens Galschiot (L) works in front of the Danish Parliament Folketinget at Christiansborg Palace Square in Copenhagen, where he erected an 8-meter-high Pillar of Shame in solidarity with the protesters in Hong Kong on January 23, 2020. (LISELOTTE SABROE/Ritzau Scanpix/AFP via Getty Images)

“It’s not possible to kill a symbol. You can only make it stronger,” Galschiot said when unveiling a full-sized replica of the Pillar of Shame at the University of Oslo in Norway.

Another, smaller copy already stands in Budapest and a copy in Prague is almost ready to debut. Galschiot said he wants to put one in front of the Chinese embassy in Washington, D.C.

Help me to commemorate the #TiananmenMassacre by raising #ThePillarofShame all over the world. We will not be silenced,  and we will not forget the deaths of peaceful students on the 4th of June 1989. Here is what you can do: https://t.co/RapOXgUoW8#WeRemember64 #PillarofShame

A group called Lady Liberty Hong Kong used photos of the original statue to create a 3D model that can be downloaded to create real or virtual replicas.

“The Pillar of Shame is a symbol of the freedom of speech that we had growing up in Hong Kong, and to remove it is a manifestation of what Hong Kong is becoming,” said one of the digital artists who created the 3D model.

A roughly half-sized Pillar of Shame will be unveiled in the Taiwanese capital of Taipei on Saturday at a vigil marking the 33rd anniversary of the Tiananmen massacre. The statue was funded by the New School for Democracy (NSD), an organization founded during the Tiananmen Square anniversary in 2011 to promote democracy in Chinese societies. 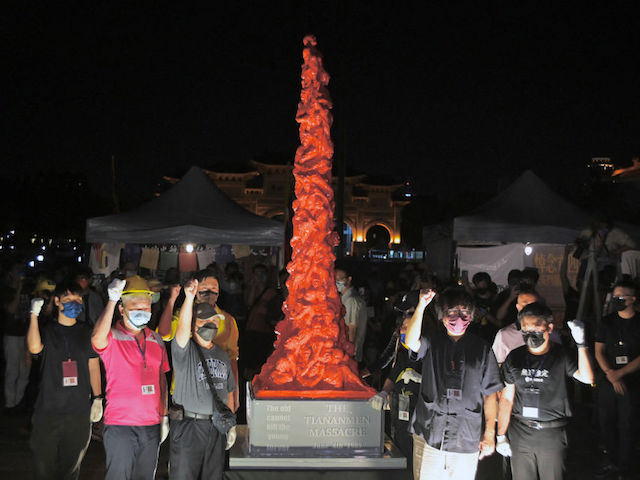 People chant slogans next to a “Pillar of Shame” during a vigil on the 33rd anniversary of the 1989 Tiananmen Square pro-democracy protests and crackdown, at the Chiang Kai-shek Memorial Hall in Taipei on June 4, 2022. (SAM YEH/AFP via Getty Images) 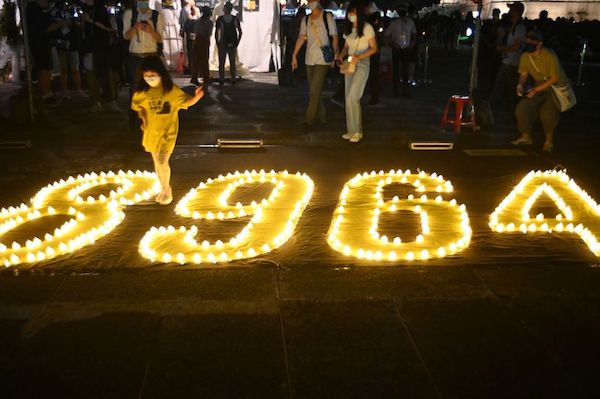 A child walks among the numbers “8964” during a vigil on the 33rd anniversary of the 1989 Tiananmen Square pro-democracy protests and crackdown, at the Chiang Kai-shek Memorial Hall in Taipei on June 4, 2022. (SAM YEH/AFP via Getty Images)

NSD Chairman Tseng Chien-yuan noted that since the famous vigil in Hong Kong has been ruthlessly suppressed by the Communist-controlled island government, Taipei now hosts the largest Tiananmen remembrance in the Chinese-speaking world.