The SCMP based its January 31 report on information from a paper published by Suzhou-based scientists in December 2021 in the Chinese Journal of Biomedical Engineering. Professor Sun Haixuan — based at the Suzhou Institute of Biomedical Engineering and Technology, a subsidiary of the Chinese Academy of Sciences — lead the team of researchers to develop a robotic system or “nanny” that monitors and provides care for mouse embryos growing into fetuses in a “long-term embryo culture device,” or artificial womb.

Sun described his laboratory as containing a line of several artificial wombs. The A.I. monitor “moves up and down the line around the clock” observing, documenting, and adjusting the development process of each embryo. Before Sun’s team created the robotic “nanny,” its tasks were performed manually by humans. Sun noted that he could increase the scale of his project if he did not need human workers.

The Chinese scientists claim the new “nanny” has surpassed its human predecessors as it is able to monitor the animal embryos’ progress in “unprecedented detail,” according to the research paper. The robot utilizes a photographic process that “take[s] ultra-sharp images of varying depth by quickly switching between different lenses.”

“AI technology helps the machine detect the smallest signs of change on the embryos and fine-tune the carbon dioxide, nutrition and environmental inputs,” the SCMP relayed on Monday.

“The system can even rank the embryos by health and development potential,” according to the newspaper. “When an embryo develops a major defect or dies, the machine would alert a technician to remove it from the womblike receptacle.”

The A.I. system’s developing technology would “not only help further understand the origin of life and embryonic development of humans but also provide a theoretical basis for solving birth defects and other major reproductive health problems,” Sun and his team argued in their research paper. 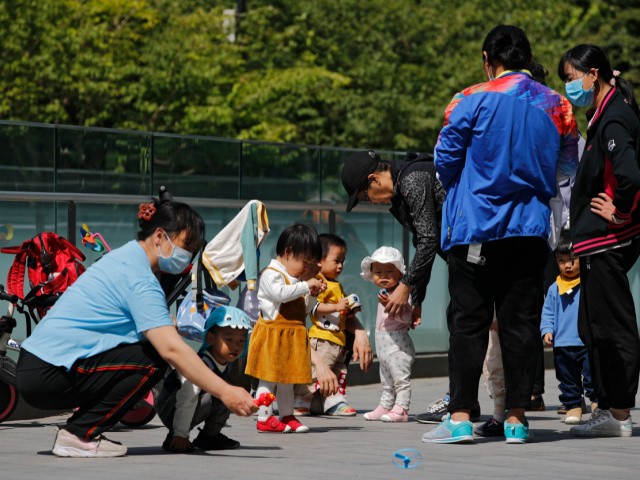 Residents bring their children to play in a compound near a commercial office building in Beijing on May 10, 2021. China’s ruling Communist Party will ease birth limits to allow all couples to have three children instead of two to cope with the rapid rise in the average age of its population, a state news agency said Monday, May 31. (AP Photo/Andy Wong)

Sun’s employer, the Chinese Academy of Sciences, is China’s state-run natural science academy. The Chinese government’s interest in attempting to solve “major reproductive health problems” likely stems from China’s recently declining birth rate. The number of newborns in China nearly halved in the five-year period between 2016 and 2021. China’s net population growth for 2021 was the lowest in six decades, according to data from China’s National Bureau of Statistics.

“Current international laws prohibit experimental studies on human embryos beyond two weeks of development,” the SCMP noted on January 31. China is among the countries worldwide currently prohibiting advanced human embryo research, meaning Sun’s lab must limit its analysis of embryo-to-fetus development to animals for now. The team’s scientists expressed a willingness for a future that would allow research of human fetuses beyond the two-week development stage in their December 2021 paper.

They argued that “the same technology” currently used in their lab “could eliminate the need for a woman to carry her baby, allowing the fetus to grow more safely and efficiently outside her body.”