The International Olympic Committee (IOC) published a review of its Chinese uniform suppliers Wednesday asserting it has no evidence either is using slaves to manufacture the products the IOC is buying.

The two companies, Hengyuanxiang Group (HYX Group) and Anta Sports, have been implicated in the past in the use of Uyghur people, who belong to an ethnic minority the Communist Party of China is currently committing genocide against, as slaves and the use of cotton picked by Uyghur slaves to manufacture their products. The Congressional-Executive Commission on China (CECC), a U.S. Congressional entity made up of senators and congressmen from both parties, requested last week the IOC explain its relationship with both companies and if it had reason to believe the products it was purchasing from the companies were or were not made by slaves.

The use of companies with ties to Chinese government-sponsored slavery is one of several grave human rights complications stemming from the IOC deciding to grant Beijing the honor of hosting the 2022 Winter Olympics. Human rights activists and victims of Chinese communism have been calling for over a year for the IOC to relocate the event – or for countries to boycott it if the IOC does not – arguing that giving Beijing hosting duties is a form of support for its genocide of the Uyghur people, its cultural genocides in Tibet and Mongolia, the repression of religious minorities, and the violent crackdown on pro-democracy voices in Hong Kong. More recently, the worsening Chinese coronavirus crisis in the country, particularly in Beijing, has surfaced as a critical threat to the health and safety of athletes.

Olympians will face other formidable threats like the potential Chinese government espionage through the mandated use of a mobile phone application for all participants in the Games; potential exposure to steroids in Chinese animal meat; and threats by Chinese officials that athletes with opinions the regime deems incorrect could face unspecified punishments.

The IOC on Wednesday only addressed concerns that uniforms and branded products made by Chinese companies would be tainted with slave labor. 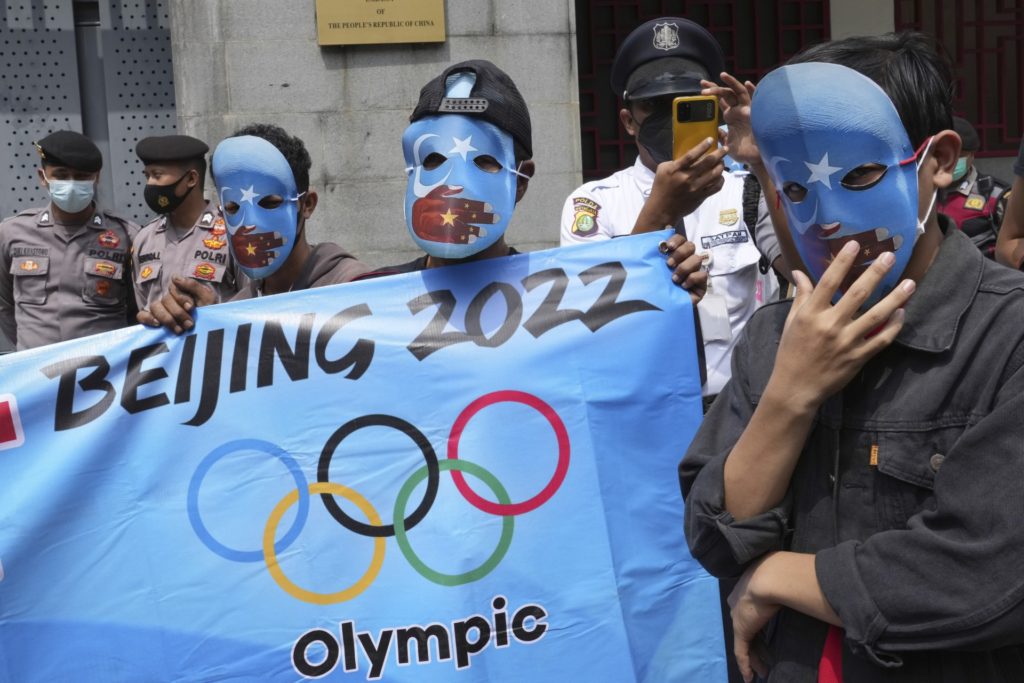 Student activists wear masks with the colors of the pro-independence East Turkistan flag during a rally to protest the Beijing 2022 Winter Olympic Games, outside the Chinese Embassy in Jakarta, Indonesia, Friday, Jan. 14, 2022. Dozens of students staged the rally demanding the cancellation of the Beijing Olympics over alleged human rights violations against Muslim Uyghur ethnic minority in China’s region of Xinjiang. (AP Photo/Tatan Syuflana)

“The IOC carried out due diligence on suppliers that produce its own branded products for the Olympic Winter Games Beijing 2022. This includes Hengyuanxiang Group (HYX Group) and Anta Sports,” the institution explained in a statement. It described the “due diligence” as detailed audits that included interviews with workers. 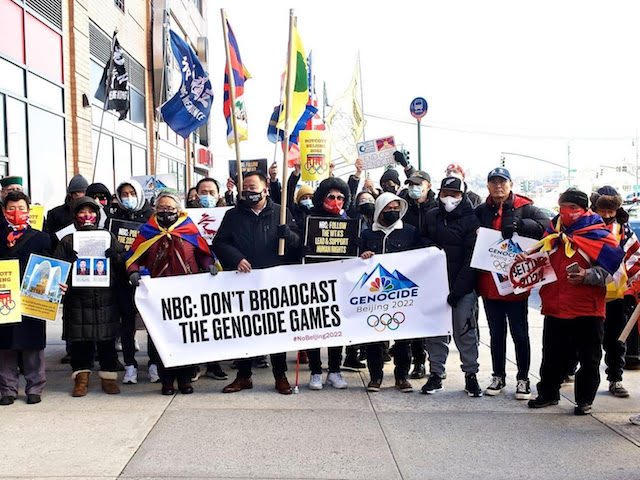 “These audits are conducted by independent third-party audit and monitoring firms with in-depth knowledge of the markets in which key IOC products are manufactured,” the IOC added, “[They] assess the root causes of non-compliance and have a stronger focus on meaningful engagement with workers on their working conditions. The audit teams always interact with workers in their own languages and away from management.”

The IOC asserted that the audits did not find any evidence of slavery, but did find “non-compliance” in the field of “working hours and wages.”

“We did not find any extreme violations against our IOC Supplier Code, including no forced, bonded, indentured or child labour,” the committee affirmed. “Non-compliances found, including on health and safety, working hours and wages have been identified and are being remediated as part of our agreed Corrective Action Plans (CAP) with each supplier.”

The most severe violations, according to the IOC, occurred in the field of “health and safety,” followed by “wages, benefits, and terms of employment.”

The Olympics leaders also specifically addressed concerns the products the Chinese companies were tasked with producing were made out of cotton from Xinjiang, or East Turkistan, the region that is home to the Uyghur people and where China stands accused of enslaving Uyghurs in its cotton fields. A study published in 2020 by the Center for Global Policy found that the Chinese Communist Party was using “poverty alleviation” mobile applications to sell as many as half a million Uyghur slaves to companies specifically to be used for work in cotton fields. About 84 percent of cotton produced in China comes from Xinjiang.

The IOC stated that the uniforms purchased from Anta Sports contained no cotton whatsoever, while the products from HYX Group used cotton sourced from outside of China.

“We have been purchasing and using cotton produced from China, including the Xinjiang region, and we will continue to purchase and use cotton from China,” Anta, one of China’s largest sports apparel companies, said in a statement last year.

Anta withdrew from the Better Cotton Initiative, an organization founded to ensure ethical work practices in cotton harvesting, in response to its call for companies not to use Xinjiang cotton.