Taliban jihadists reportedly assaulted a group of an estimated 20 women who convened in Kabul, Afghanistan, on Sunday demanding justice for two recently slain women and respect for their basic human rights.

Afghan women have been organizing protests consistently since August, when the Taliban terrorist organization seized Kabul after a brief but extremely successful campaign to overthrow the former government. The Taliban campaign began in earnest after President Joe Biden broke an agreement that predecessor Donald Trump had made with the Taliban to withdraw American troops from Afghanistan by May 1, 2021; Biden announced in April that he would extend the 20-year Afghan War through September.

Biden also broke this commitment – he withdrew troops in early August – but by August 15, former President Ashraf Ghani had fled the country via helicopter and the Taliban was occupying the presidential palace. The abrupt collapse of the government left women and girls particularly vulnerable, as the Taliban’s first term in power resulted in the erasure of most basic human rights for girls and women, paramount among them the right to education.

Most of the women’s protests in Kabul in the past five months have urged the Taliban to allow women to return to work and reopen schools for girls. Taliban jihadists have promised that their second attempt to run the country will be less brutal and more “inclusive,” and that they would allow women and girls to exist in the public school but only “based on the sharia,” the Islamic law. The Taliban had, in the past, interpreted sharia to deny women and girls a place in society, imposing even the full-body covering known as the burqa.

Taliban jihadists claim they will only strongly recommend the hijab, the Islamic hair covering, but have since placed posters advertising the burqa all over Kabul.

The protest on Sunday, according to the Afghan broadcaster Tolo News, was organized specifically to protest the killings of two women, Zainab Abdulahi and Zainab Ahmadi.

“We want to raise our voices, so that our voices could be heard by the international community, which is against injustice and oppression,” one protestor told Tolo. The women assembled asserted that Taliban jihadists killed both women. 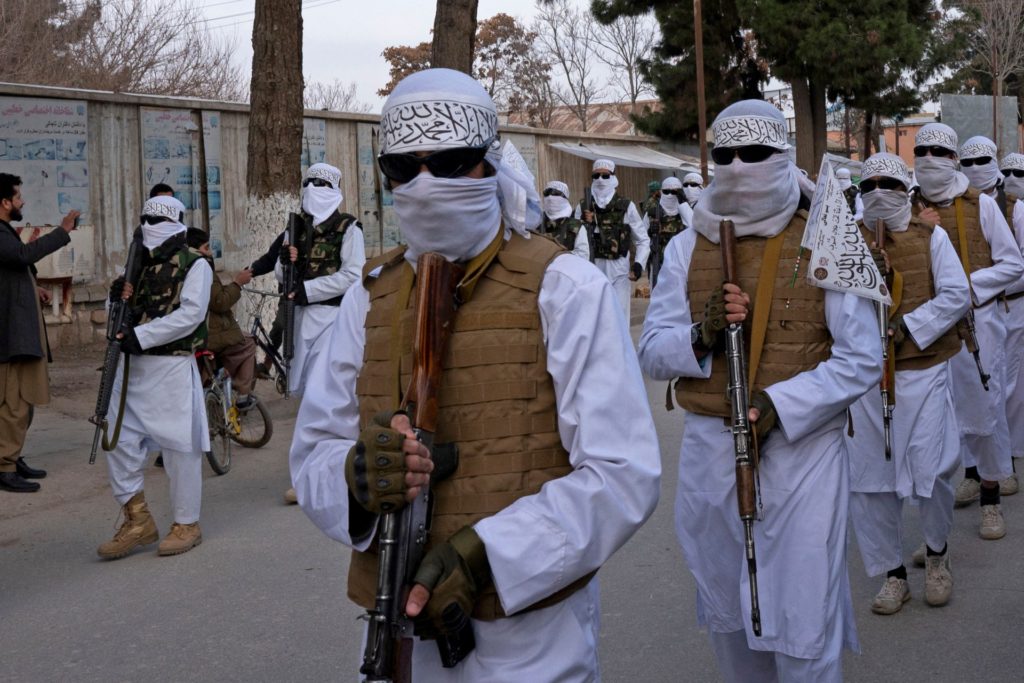 In this photograph taken on January 16, 2022, Taliban fighters take part in a military street parade in Maymana, capital of Faryab province. (ELISE BLANCHARD/AFP via Getty Images)

“While I am alive and have one drop of blood in my body, we will stand, we will fight. The bullet that hit the Hazara Girl’s chest- hit my chest as well,” another protestor told Tolo, referring to the Shiite ethnic minority that the Taliban has persecuted in the past. 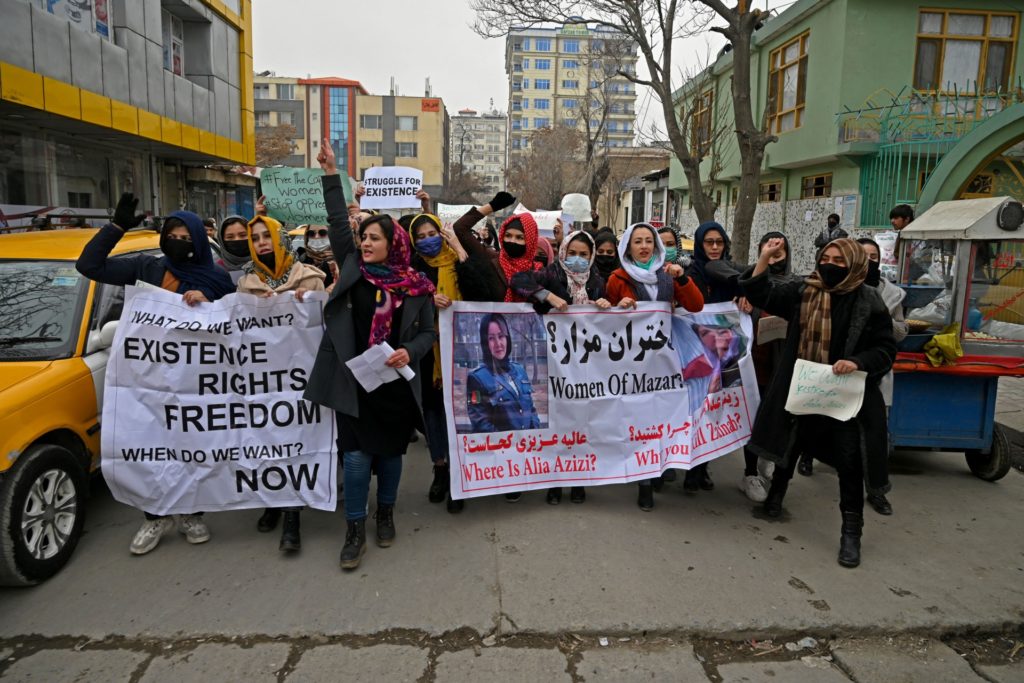 Afghan women march as they chant slogans and hold banners during a women’s rights protest in Kabul on January 16, 2022. (WAKIL KOHSAR/AFP via Getty Images)

Other reports this weekend corroborate the protests against the reported killings. The Afghan outlet Khaama Press reported on one such killing of a 25-year-old woman, identified only as “Zainab,” allegedly shot dead at a Taliban checkpoint.

“Family members of the slain Zainab said that they or the way home back from a wedding function who were stopped in a check post and were then shot at,” Khaama Press reported. “The motive behind the shooting is not yet clear but the Islamic Emirate of Afghanistan pledged to be investigating the case and bring to justice the perpetrators.”

Khaama reported of a similar killing in December of 22-year-old identified as “Faisal,” both of them in Kabul.

Tolo reported that Taliban jihadists responded to the protest – which attracted complaints of a wide variety of grievances including not letting girls go to school and increasingly high prices for basic food goods – by tear-gassing the protesters. The details are consistent with the U.K. Guardian, which reported on Monday that at least one woman was hospitalized for significant injuries suffered as a result of the Taliban attack on the protest.

“When we were near Kabul University three Taliban vehicles came, and fighters from one of the vehicles used pepper spray on us,” an anonymous woman present at the event told the Guardian. “My right eye started to burn. I told one of them: ‘Shame on you,’ and then he pointed his gun at me.”

The Guardian reported that eyewitnesses saw jihadists also targeting anyone who may be a journalist in an attempt to prevent word of the protest from spreading.

Months of protests have done little to change the Taliban’s disposition towards women. Taliban spokesmen have repeatedly insisted since the group returned to power that it would not reinstate the repressive policies against women of the 1990s and that it would allow girls to go to school.

“We are not against education,” Taliban spokesman Zabihullah Mujahid said on Saturday in an interview with the Associated Press. Mujahid argued that the only reason the Taliban had currently banned girls from going to school is because they did not have enough infrastructure to ensure space for boys’ and girls’ schools that keep children segregated by sex.

“Girls and boys must be completely segregated in schools, he said, adding that the biggest obstacle so far has been finding or building enough dorms, or hostels, where girls could stay while going to school,” the Associated Press asserted. “In heavily populated areas, it is not enough to have separate classrooms for boys and girls—separate school buildings are needed, he said.”

The Taliban has chosen to educate the boys.